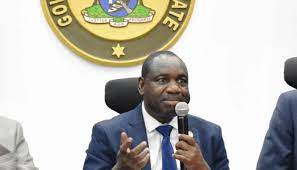 The Lagos State government is insisting on collecting Value Added Tax (VAT) following the ruling of the Federal High Court in Port Harcourt that collection of VAT falls within the jurisdiction of state governments.

With an estimated population of about 22 million people and huge consumption expenditure, Lagos, Nigeria’s economic hub, accounts for about 55 percent of Nigeria’s total VAT. This puts it way above several other states with the FCT, Abuja, coming second with about 20 percent; Rivers, 6 percent, and Kano, 5 percent.

The Federal High Court sitting in Port Harcourt, Rivers State, and presided over by Justice Stephen Pam, on August 9, restrained the FIRS from collecting VAT and personal income tax (PIT), saying, “ the law does not back FIRS authority above state governments in the collection of VAT and PIT.”

The FIRS has appealed the ruling and advised the public to maintain a status-quo on the payment of the taxes. But the Lagos government says appeal does not equate to a stay of execution on the court’s ruling, which means states have the right to act on the court’s ruling to collect the specified taxes.

Gbenga Omotosho, Lagos commissioner for information and strategy, says the FIRS’ appealing the case at the Appeal Court does not translate to a stay of execution, the state is legally backed to collect the tax.

“An appeal is not a stay of execution. For us in Lagos, our position is that we have the backing of the law to demand and collect VAT. The court has ruled and we are following the judgment.

“As a state, we believe the development is good for progress and true federalism that we have been clamouring for,” Omotosho states.

The state’s position is corroborated by Osa Director, a legal practitioner, who says VAT falls within the jurisdiction of state governments as ruled by the court.

Lagos has the backing of the law to collect VAT following the landmark ruling by the Port Harcourt Federal High Court, which paved the way for state governments to begin the collection of VAT and PIT in their respective states, Director confirms a phone interview.

Muhammed Nami, executive chairman, FIRS, had in a letter dated August 24 and addressed to Moyosore Onigbanjo, the attorney-general and commissioner for justice in Lagos State, said the FIRS would continue collecting VAT from businesses in the state.

This came after the Lagos State government had directed the FIRS to stop issuing demand notices for payment of VAT in the state and to render accounts within seven days of all sums collected as VAT in the current accounting circle in the state.

In the letter addressed to the Lagos commissioner, Nami said since the Rivers court decision had been appealed “the law does not allow a party to a suit to carry out an action to forestall the decision of the appellate court once an appeal has been entered.”

He said there were contrary rulings by similar courts on the same matter.

The FIRS further noted that parties must maintain the status quo until the decision of the appeal court.

“In view of the foregoing, parties have to maintain the status quo ante (i.e. their positions before the instant judgment of the Federal High Court, Rivers State).

“The FIRS shall continue to collect VAT and administer the VAT Act until the final resolution of the legal dispute by the relevant appellate court.”

However, some legal minds have faulted the insistence of the FIRS to continue demanding and collecting VAT in spite of a subsisting ruling by a competent court of jurisdiction stopping it from doing so.

But Osa Director insists that the FIRS could risk contempt of court if it continues to insist on the collection before a pronouncement on the matter by an appellate court.

Also, Yomi Farounbi, former chairman, Nigerian Bar Association (NBA), Ikeja branch, says the FIRS will be running foul of the law to continue to insist on the collection of VAT while the Federal High Court subsists.

According to Farounbi, Lagos, or any other state of the federation, is now backed by the ruling to demand and collect VAT until the pronouncement is vacated by an appellate court. “So, whatever letter FIRS is writing to claim it can still collect while the ruling subsists is of no effect, unless they apply for a stay of execution,” Farounbi .