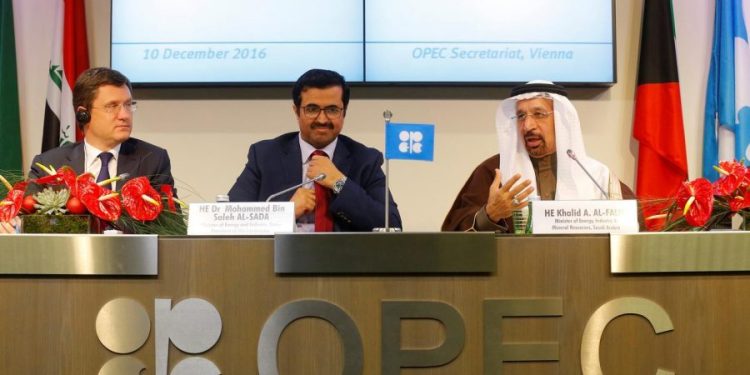 On Monday that the Organization of the Petroleum Exporting Countries and allies (OPEC+), who were supposed to meet on Monday to conclude on their decision as to whether or not to extend output cuts, did not do so and the group left the world guessing as no announcement was made to reschedule the meeting for a new date, indicating that the clash on Friday between Saudi Arabia and the United Arab Emirates (UAE) is yet to be resolved.

The Publisher Nigeria learnt that there is also a concern for OPEC+ players that non-member, the United States, could boost output and grab market share as current price levels make shale oil production profitable.

The standoff between OPEC+ members has significant implications for the price of oil and the global economy. Since the members have failed to reach an agreement, this means that the group could keep its existing cuts of 5.8 million bpd in place until April 2022, when the deal expires. The oil market has reacted with significant volatility since Monday’s call off.

The implication of this, since the output will remain unchanged in August, is that oil prices will be bullish in the short term. However, a breakdown in talks puts the broader deal at risk, increasing the chances of greater supply in the long run as OPEC+ members will be looking to gain market share which will not do well for the price of oil.

If the members were to reach an agreement, the following could be the likely outcomes:

This is a win situation for Saudi Arabia, the top producer in the OPEC+. The country is among those keen to see output raised in stages by a total of 2 million barrels per day (bpd) between August and December and then an extension of remaining cuts until the end of 2022 from current plans to cut until next April.

The UAE has frowned at the extension because the country is upset about the baseline from which its production cuts are being calculated. Abu Dhabi has invested billions of dollars to increase its production capacity and says its baseline was set too low when OPEC+ originally forged their pact. If this proposal is adopted, oil prices could be set for further gains, especially for oil contracts further along the futures curve.

Although not happy with it, the UAE has said it will support raising production by 2 million bpd until the end of 2021 but did not entertain discussions on extending the pact beyond April 2022, a position that has caused the standoff between the nations. This proposal, if adopted, could also see oil prices rally further in the short term, especially as analysts have said that the proposed increase will keep the oil market in deficit given rising demand.

This scenario could also see trouble for the OPEC+ pact later if the UAE remains dissatisfied and decides not to participate in an extension of it.

The collapse of the current OPEC+ deal

The risk of the OPEC+ deal falling apart would mean that individual producers could then unilaterally hike output in a race to recover market share. This is seen as a very unlikely scenario, as the current deal is valid until the end of April 2022.

A similar situation happened in April 2020. Back then, the deal was already set to expire at the end of March and the group failed to establish a new deal. This led the group to pump at maximum capacity in April. If the scenario repeats itself this time, it would not do well for oil prices because back in April 2020, the OPEC+ disagreement led oil prices to all-time lows.

The failure of the OPEC+ to agree on production policy beyond this month has introduced a new layer of market uncertainty, raising the prospect of tighter crude supplies and price volatility.

Delegates have stated that unless the group agrees within the week on parameters surrounding a production increase, it is likely that discussions will be pushed back until next month’s meeting. This would see OPEC+ members’ July quotas roll over into August, which delegates warn would tighten supply and increase prices which have already hit multi-year highs this week.

While this could benefit OPEC+ members in the short term by providing greater revenues as oil prices increase, it could encourage more production from the US shale sector. This would cause difficulties in maintaining the reduction in Organisation for Economic Co-operation and Development (OECD) stocks.

For Nigeria, the standoff will affect the current landing cost of refined oil. The NNPC is currently struggling with keeping the petrol prices between N162 and N165. The NNPC has stated that the landing cost is around N232 and an increase in oil prices will see the landing cost go even higher to a price point the NNPC may not be able to maintain. This will in turn push fuel prices in Nigeria higher, which could spell doom for the economy which is currently struggling with hyperinflation.