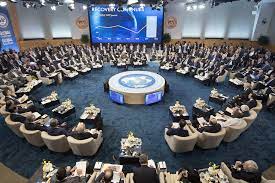 The International Monetary Fund (IMF) has called for the adoption of the Nigerian Autonomous Foreign Exchange (NAFEX) window for official transactions as well as the unification of all rates to achieve a market-clearing rate.

It stated this in a statement issued after a virtual meeting with Nigerian authorities from June 1 to 8. It, however, noted that the positions “do not necessarily represent the views of the IMF’s Executive Board”. Jesmin Rahman led the visiting IMF employees.

“The recent removal of the official exchange rate from the CBN website and measures to enhance transparency in the setting of the NAFEX exchange rate is encouraging. The mission recommended maintaining the momentum towards unifying all exchange rate windows and establishing a market-clearing exchange rate.

“To strengthen the monetary targeting regime, the mission recommended integrating the interbank and debt markets and using the central bank or government bills of short-maturity as the main liquidity management tool, instead of the cash reserve requirements,” she said.

The mission also urged the authorities to keep CBN overdrafts for deficit financing within legal limits while the government “continues to make efforts to strengthen budget planning and public finance management practices to allow for flexible financing from domestic markets and better integration of cash and debt management”.

According to the IMF executive, the team noted that the fiscal deficit of “the consolidated government is expected to remain elevated at 5.5 per cent of the gross domestic product (GDP)” with downside risks to the near-term that may arise from further deterioration of security conditions and the uncertainty caused by the COVID-19 pandemic.

The IMF team expressed concerns about the resurging fuel subsidies and called for a “market-based fuel pricing mechanism” as a necessary action to reduce the fiscal deficit, which puts pressure on the government and intensifies reliance on ways and means (W&M) advances.

YOU MAY ALSO LIKE:   Nasarawa:Drama As Police Arrest Governor’s Aide For Railway Vandalism

The team confirmed the gradual recovery of the economy but warned that rising unemployment and high inflation posed enormous risks to the economy. Growth, the group stressed, is expected to reach 2.5 per cent this year.

“The Nigerian economy has started to gradually recover from the negative effects of the COVID-19 global pandemic.”

Following sharp output contractions in the second and third quarters, GDP growth turned positive in Q4 2020 and growth reached 0.5 per cent (y/y) in Q1 2021, supported by agriculture and services sectors.

YOU MAY ALSO LIKE:   Ramadan: 2 things Nigerian Muslims must do - Lagos Speaker

“Nevertheless, the employment level continues to fall dramatically and, together with other socio-economic indicators, is far below pre-pandemic levels. Inflation slightly decelerated in May but remained elevated at 17.9 per cent, owing to high food price inflation. With the recovery in oil prices and remittance flows, the strong pressures on the balance of payments have somewhat abated, although imports are rebounding faster than exports and foreign investor appetite remains subdued resulting in continued FX shortage,” Rahman noted.

YOU MAY ALSO LIKE:   Igangan:If You Can’t Protect Us,Igboho, Others WIll –Mailafia Bombs Buhari

The group noted that the banking sector was adequately capitalized and the non-performing loan (NPL) reasonably low.

It, however, said that “it remains to be seen what share of forborne loans may turn non-performing as the impact of the pandemic abates”, adding that regulatory oversight was critical to safeguarding financial system stability.