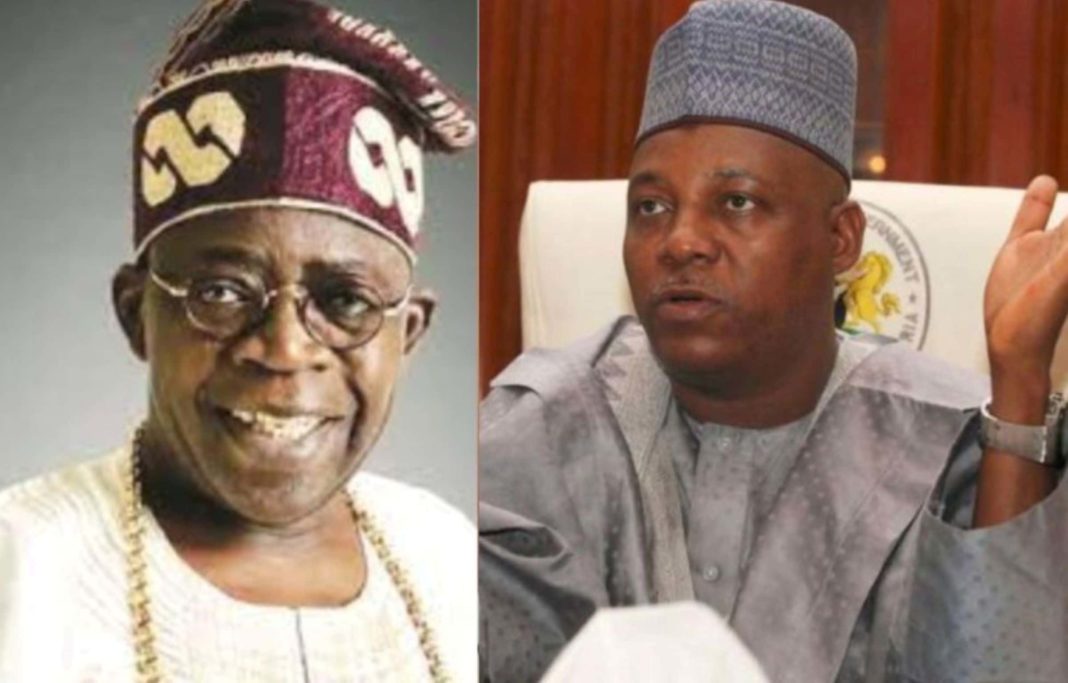 The former governor of Borno State spoke in Abuja when a support group, ‘APC National Integrity Movement’, visited him.

But, the PDP fired back, accusing the APC of avoiding issues germane to the 2023 poll.

Shettima assured that Tinubu will hit the ground running and form his cabinet within the first week after his inauguration, if elected as president.

He described Atiku as a political tourist who comes to the country only when there is an election and returns to Dubai, United Arab Emirates, to relax thereafter, adding that unlike the Tinubu and himself, the former vice president cannot point to anybody he has mentored.

The APC vice presidential candidate described Tinubu as a man with an excellent track record of service delivery, qualitative leadership, and mentor of men and women who have excelled in their different careers.

He said: “Atiku Abubakar is like a father to me and I hold him in high esteem. But he is a political tourist who is only in this country every electoral circle and we are going to retire him back to Dubai to go and relax. In every situation, for people to see your worth, they need to see your output at home. I am from the Northeast; he is from the Northeast.

Read Also; Southsouth group: we will mobilise for success of Tinubu/Shettima ticket

“Atiku cannot point to three projects that he brought to the Northeast or to Northern Nigeria for the eight years that he served as the vice president. He cannot show us three people that he has mentored.

“Is he even in good term with past governors of Adamawa state? Admiral Nyako is with us. James Ngilari is with us. Asiwaju can boast of Prof. Yemi Osinbajo, he can boast of Babatunde Raji Fashola, he can boast Lai Mohammed, Rauf Aregbesola, Kayode Fayemi, Femi Gbajabiamila, Abiodun Faleke, Joe Igbokwe, Ben Akabuaze. I can boost of Babagana Zulum, Senator Abubakar Kyari, Mohammed Ali Ndume, Betara Aliyu and Tahir Mongunu, Zanaib Gimba.”

Describing Tinubu as the best material for the presidency, Shettima said: “The trajectory of global growth is facing Africa and Nigeria will make or mar that transition. That is why I will rather be a small fish in a big pond than be a big fish in a small pond.

“I supported Asiwaju out of a moral obligation, out of a moral conviction. What we have seen is his opportunity for national collaboration and national cohesion. When the frontlines that divides us were being manipulated for political ends, Asiwaju refused to swallow the pill.

“Nigerian’s of younger generation must know Asiwaju’s history of two decades past when he stood firm as the fulcrum to a despotic PDP government in this country when he was viciously maligned and ostracised and that was when he laid the foundation for modern Lagos state.

“He provided support and succour when the nation was enveloped in darkness and when we were having lots of destruction in the hands of military dictators, he was a sanctuary for victims of political witch hunt including former Vice President Atiku Abubakar who was intimidated ad harassed, dehumanised and chased out of the PDP.

“Those of us who were in Lagos in 2014 for the Presidential primary of the APC can attest to the fact that without the block support of the south west, President Muhammadu Buhari would not have emerged as the Presidential flag bearer of the APC.

“For God sake, ours is a young nation where inclusivity and sense of belonging has been the cardinal work of our national and political intercourse. If power resides in the north for eight years, for God sake, it should move.

“Bill Clinton and his running mate were both from southern United States. Nobody bathed an eyelid because they have reached that level in their national political development. Out of share opportunity, the PDP is fielding a northerner as their Presidential candidate and the Press are not subjecting that to a microscopic scrutiny. Where is the Nigeria media? President Buhari is being subjected to serious attack.

“I want to assure you that my Principal, Asiwaju Bola Ahmed Tinubu will run an inclusive government and the reward system will be recalibrated so that only people with value addition capability can be recognised and rewarded and embraced.

“You will not come with starched gown and get coveted position. You have to move beyond that. Politics of starched gowns has come to an end, while politics of value addition has come. Asiwaju has a big heart and has the generosity of spirit to embrace everyone. He will not deprive any Nigeria of whatever political colouration of his or her rights.”

Osita Okechukwu, who described Atiku’s opposition to zoning as a comedy of errors, said the alliance between him and Ayu was also a contravention of the PDP constitution.

Okechukwu, in a statement in Abuja said: “What Ayu succeeded in doing by retaining the imbalance between the North and South in the PDP and arrogantly refusing to step down from his party’s high horse chairmanship, is simply to wilfully coronate Atiku, as Nigeria’s 2023 version of His Excellency Raila Odinga.

“You will note that after all, both Atiku and Raila share a lot in common – former vice presidents, and serial presidential candidates. Indeed, Ayu has by his nepotism given us impetus to, from henceforth, with no harm meant, address Nigeria’s former vice president as His Excellency Atiku Odinga,” he declared.

The APC chieftain narrated how most patriotic Nigerians waited with high expectations that the 79th PDP National Executive Council will take a profound decision aimed at redressing the North-South imbalance by placating the betrayed members of its Southern bloc with the chairmanship.

“But, having superimposed nepotism and arrogantly breached PDP Constitution; Ayu and Atiku rather propelled the tokenism of swapping the ceremonial BOT chairmanship, which was akin to telling a child at a village ceremony that since plates to serve rice have finished, he should open his palms to collect his portion.”

Okechukwu, who is also the Director-General of Voice of Nigeria (VON), said PDP has finally convinced Nigerians that it is neither prepared nor interested in building a harmonious, united and progressive country.

He added: “Atiku and Ayu have regrettably painted PDP in opaque colour of party of share the money, stomach infrastructure, and rent seekers; by placing their personal interests above national unity

He said on phone that the APC has resorted to distractions because it has nothing to tell Nigerians.

Aniagwu said: “They are always quick to cast aspersion on others thinking they can divert attention from how they have destroyed the economy and mortgaged the lives of Nigerians

“Atiku has demonstrated capacity in the areas of investment and job creation which everyone can see.

‘In just seven years, they have destroyed virtually all the gains and achievements the PDP recorded over a period of 16 years and they are not even remorseful.

“They have destroyed every sector and aspect of Nigerian life with their divisive policies. It is to their credit that Nigerians are today so divided along fault lines than they have ever been before”.

According to the spokesman, the PDP campaign is focused on issues that touch the lives of Nigerians and will not be distracted by the diversionary tactics of the APC.

“We are keeping our eyes on the ball because we are on a mission to bring Nigeria back from the brink and rescue our people from extreme poverty, frightening insecurity and economic strangulation.”