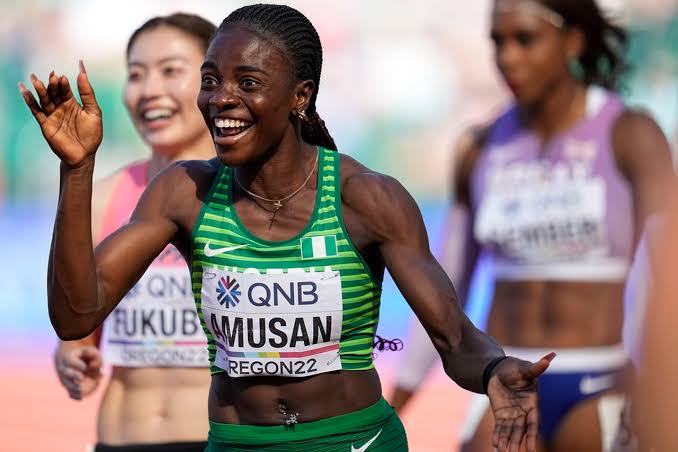 Her victory and another great performance by Ese Brume meant that after labouring all week long with nothing tangible to show for their efforts, Team Nigeria ended their campaign at the World Championships in Oregon on a spectacular note; winning a gold and a silver medal on the final day of action.

The duo of Tobi Amusan and Ese Brume produced the medals for Nigeria and they did it in style Oregon with jaw-breaking performances.

Tobi Amusan set the World Record twice before she was crowned the world champion in the 100m hurdles while Brume needed to dig deep for her silver in the long jump. 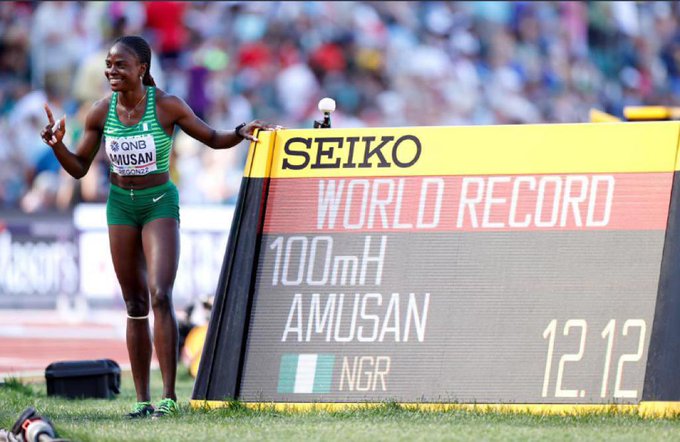 Oluwatobiloba Amusan was born on the 23rd of April, 1997, in Ijebu Ode, situated in Ogun State, Nigeria. She is a famous Nigerian athlete. After she completed her secondary school education, she started her early life as an athlete.

Amusan showed a lot of athletic potential from an early age. She was a silver medallist at the 2013 African Youth Championships in Warri. She also claimed gold in the 100 metres hurdles at the 2015 African Junior Athletics Championships in Addis Ababa. In 2015, while making her All-Africa Games debut as an eighteen year old, she won the gold medal in the 100 metres hurdles.

In 2016, as a freshman at The University of Texas at El Paso (UTEP), Amusan became the second athlete for the university to be named C-USA Female Track athlete of the Year since UTEP joined C-USA. She was the gold medallist in both the 100 mH and the 200 m. She also claimed a silver in the long jump at the C-USA Championships. Amusan first broke the 13 s barrier in the hurdles with a time of 12.83 s at the El Paso UTEP Invitational. This eclipsed Kim Turner’s 100 mH UTEP record which had stood for 33 years. She was runner-up at the 2016 NCAA Outdoor Championships in the 100 mH. She ran a windy 12.79 s behind Kentucky’s Jasmine Camacho-Quinn. Amusan also competed at the 2016 World Junior Championships in Bydgoszcz. Despite running her second fastest time ever, she placed fifth in the final. She went on to represent Nigeria at the Rio Olympic Games, reaching the semifinals of the 100 mH.

In her first outdoor race of 2017, she ran a then lifetime best and UTEP record of 12.63 s in the 100 metres hurdles. She was the C-USA champion in her specialist event and also the runner up in the 200 metres. At the 2017 NCAA Outdoor Championships, there was a reversal of finishes in the 100 metres hurdles. In a dramatic race, Amusan claimed the title ahead of Camacho-Quinn who was the champion the previous year. She did this in a personal record time of 12.57 s. She also represented Nigeria at the World Championships in London later in the year.

At the 2018 Commonwealth Games in Gold Coast, Australia, 2015 World Champion, Danielle Williams seemed to be the favourite to take the title in the absence of Sally Pearson. In the final however, Amusan moved ahead of her competitors and won the race by a clear metre ahead of Williams. She also won a bronze medal in the 4 x 100 m relay with her team mates, Joy Udo-Gabriel, Blessing Okagbare and Rosemary Chukwuma. Later in the year, she won her first African Championships title in her specialist event at the Asaba African Championships. This fulfilled a Nigerian tradition as Judy Bell-Gam had won this race for Nigeria at the first African Championships. She also claimed a gold medal in the 4 x 100 m relay at the championships.

On October 5, 2019, at the 2019 World Championships in Doha, Qatar, she ran a personal best of 12.48 s during the 100 metres hurdles qualifying rounds. In the semi-finals the following day, she equaled this personal best before placing 4th a few hours later in the final with 12.49 s.

Amusan finished fourth in the Tokyo Olympics with a time of 12.60s. She later competed in the Zurich Diamond League event, which she won in 12.42s, becoming the first Nigerian to win a Diamond League trophy.

She won gold in the 100m hurdles at the 2022 African Championships in Mauritius, defending her title successfully with a time of 12.57s ( wind-aided). She also competed in the women’s 4×100m and won gold.

Later in 2022, she competed in a Diamond League meet, finishing second with a time of 12.60s, behind olympic champion Jasmine Camacho-Quinn.

Amusan entered the 2022 World Championships as a medal contender after back-to-back 4th place finishes. In the heats she ran a new personal best of 12.40s, bettering her old record by 0.01s. In the semifinal she set a new world record of 12.12s. She bested her time once again in the final, running 12.06s (wind assisted, so not recognized as a world record), becoming the first Nigerian to win a world title.

Tobi Amusan is one of the richest and most renowned  Athletics in Nigeria. Many online sources have claimed that her net worth is estimated to be $1.5 million but Newsone cannot verify this.

Tobi Amusan is still in her prime, looking forward to setting records and winning more medals for Nigeria. We wish her success in all her endeavors. You can also drop a wish for her in the comment box below.