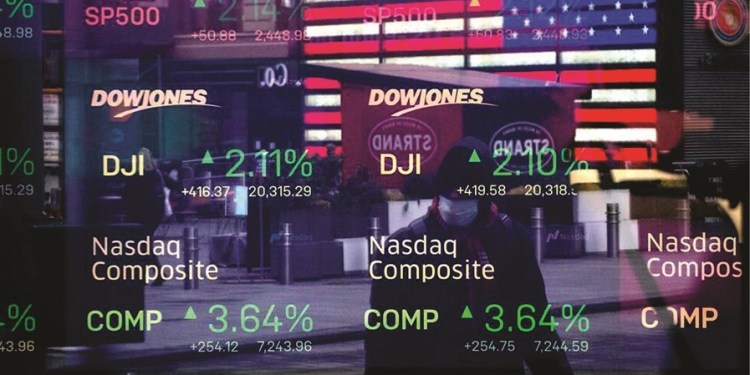 The stock market held big gains at midday Wednesday after the price of crude oil backed off from nearly 14-year highs.

The S&P 500 jumped 2.5% while the Nasdaq composite vaulted 3% as a pattern of big price moves continued to characterize stock trading.

The Nasdaq’s decline from its November peak had exceeded 20%, what Wall Street considers a bear market. Right now, the index is 19% below its prior high.

The Nasdaq and S&P 500 came close to undercutting their Feb. 24 lows, but are making a stand around that level. A drop below it would effectively kill a rally attempt, although the stock market volatility makes market signals difficult to read. On Tuesday, for example, the Nasdaq climbed as much as 2.6% before reversing lower.

U.S. crude slid 4% to $118.58 a barrel midday Wednesday. It’s down 9% from the week’s peak above $130 a barrel after the U.S. moved to ban Russian imports of crude oil. It is one of the heaviest sanctions against Russia for its invasion of Ukraine.

In the Ukraine war, Russian forces continued to push toward Kyiv and other major cities, while Ukrainians fought off attacks and tried to evacuate civilians.

Cryptocurrency stocks rallied after President Joe Biden ordered federal regulators to review the risks of the crypto market to consumers, investors and the economy. The review also will examine the creation of a U.S. digital currency.

Investors saw positives in Biden’s executive order, despite the threat of regulation.

Bitcoin climbed above $42,400, according to Coindesk quotes. Cryptocurrency shares have been slumping since December.

IBD 50 Keeps Up With Stock Market

Zim Integrated Shipping (ZIM) pared its gain to 4.7% after the company reported a 366% surge in earnings for the fourth quarter. Sales rose 155% to $3.47 billion. Other shippers such as Matson (MATX) and Global Ship Lease (GSL) rose more than 2%.

Boston Properties (BXP), the largest publicly traded office building real estate investment trust, rose above the 123.77 buy point of a cup-with-handle base. But volume was below average.

CF Industries (CF) was down 4% in heavy trading. The fertilizer stock is cooling off after rising more than 30% in two weeks.

Analyst Michael Pachter had kept a bearish rating on the stock for years, but today struck a bullish tone. “Netflix’s first-mover advantage and large subscriber base provides the company with a nearly insurmountable competitive advantage over its streaming peers,” he noted.

Alphabet (GOOGL) rose 3.5% in midday stock market trading, and has now defended the 2,500 price level three times since January. The company’s Google division agreed to acquire Mandiant, a cybersecurity software and services company, in a deal valued at $5.4 billion.