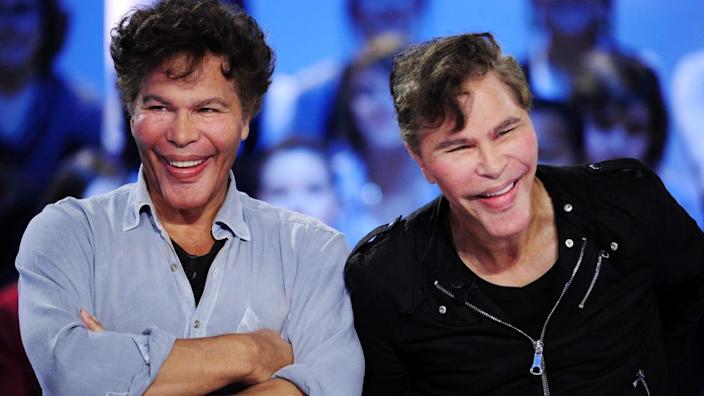 With cheekbones “so high and bulbous as to appear to threaten their owners’ vision,” as an Australian newspaper described them a decade ago, the Bogdanoff twins drew attention wherever they went.

The controversial celebrity scientists, who both obtained doctorates after penning a series of impenetrable and allegedly meaningless physics papers, were descendants of nobility and, later, a meme beloved on social media platforms like Reddit and 4chan.

But their voyage through the stars ended recently in a Parisian hospital, where both Grichka and Igor Bogdanoff had been admitted on the same day last month after contracting COVID-19. Grichka, the younger twin, died in the intensive care unit on Dec. 28. Igor followed him on Monday. Both were 72.

A source close to the brothers told French outlet Le Monde that neither had been vaccinated against the virus.

The socialite scientists made headlines almost exactly a year ago for allegedly “swindling” a millionaire, a 53-year-old man identified only as “Cyrille P.” in the subsequent lawsuit, convincing him to invest hundreds of thousands of euros in various projects, including an attempt to revive Temps X, the pop science show that first skyrocketed the brothers to fame in 1979.

Decades before they beamed themselves, decked out in futuristic spacesuits, into the homes of families all over France, the twins were born in a castle in Gascogne in 1949. Descended from German and Austrian nobility, Igor and Grichka were raised by their grandmother, Countess Bertha Kolowrat-Krakowská, whose scandalous affair with Roland Hayes, the first Black American to attain international fame as a classical musician, produced the twins’ mother.

The brothers went on to study applied mathematics at the Institute of Political Science and the École Pratique des Hautes Études in Paris. They then found a niche for themselves as writers, producers, and presenters of Temps X, which ran from 1979 into the mid-eighties.

Igor and Grichka first invited controversy with the 1991 publication of a book, Dieu et la Science (God and Science), which went on to become a French bestseller. Its debut, however, roiled academics after a University of Virginia astronomy professor filed a plagiarism lawsuit over the manuscript.

Settling out of court, the Bogdanoffs began work towards their doctorates in 1993. After defending their theses and publishing five articles in several peer-reviewed physics journals, both brothers passed with the lowest possible grade.

Tracing their story in 2002, a New York Times reporter wrote that one of their advisers described the twins as “wunderkids” who had difficulty understanding they were not “the Einstein brothers.” The adviser, Dr. Daniel Sternheimer, told the Times that teaching the brother was like “teaching My Fair Lady to speak with an Oxford accent.”

Their papers, published in journals like Annals of Physics, claimed, among other concepts, to identify what happened both before and during the Big Bang. The Bogdanoffs’ work was first disputed in 2002, after a University of Tours physicist raised concerns in an email to another academic. The scientist, Max Niedermaier, called the twins’ writing “delightfully meaningless combinations of buzzwords,” fretting that their evidence had nonetheless “been taken seriously.”

Asked why the brothers had been conferred their degrees, Dr. Sternheimer said, “These guys worked for 10 years without pay. They have the right to have their work recognized with a diploma, which is nothing much these days.”

He called the subsequent scandal, nicknamed “the Bogdanoff affair,” a “storm in a teacup.” The dispute ended in a report that found the twins’ theses held no scientific value, but Classical and Quantum Gravity, another peer-reviewed journal that published a Bogdanoff paper, ultimately declined to print a retraction.

Social media users would eventually stumble upon the brothers, who by the turn of the century had apparently discovered plastic surgery. (Both would repeatedly deny that they had ever had extensive cosmetic surgical procedures performed.)

Beginning on Reddit in 2015, users ran wild with conspiracy theories about the brothers, claiming, among other things, that the Bogdanoffs had “psychic powers” and could control the cryptocurrency markets.

This last claim stemmed from a television appearance in June last year, when Grichka remarked on French show Non-Stop People that he and his brother helped develop the source code for Bitcoin. Both also claimed that Satoshi Nakamoto, the pseudonymous name for the figure purported to have invented Bitcoin, had given them two “ancient” Bitcoin in “physical form.”

“In terms of credibility,” a French editor told news site Decrypt at the time, Igor and Grichka “are equivalent to a scientific version of the Kardashian family.”

Read more at The Daily Beast.