Home Top Stories How to protect yourself from hackers 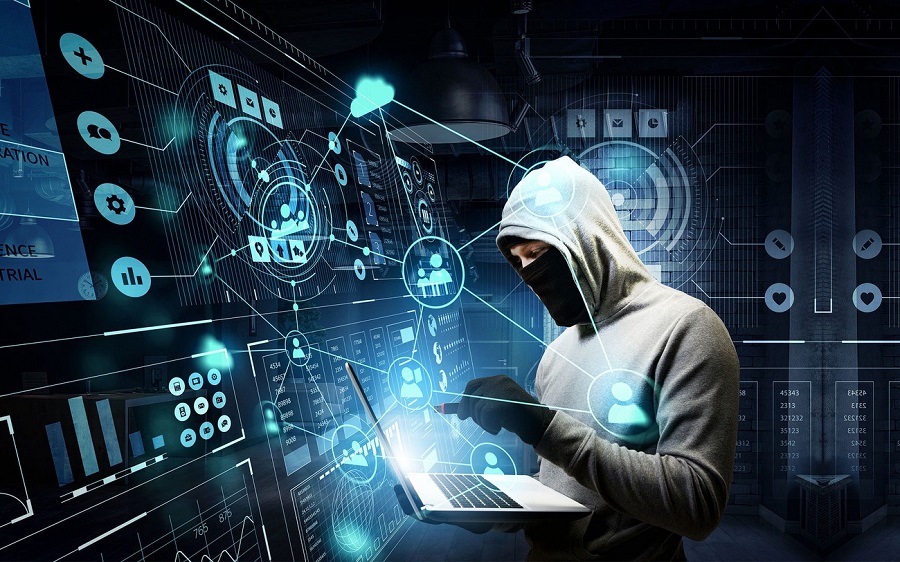 Hacking – A hooded figure types commands at top speed as the sterile glow of his monitor illuminates a dark room. Is this what comes to mind when you hear the term “hacker”? Actually, there are many types of hackers, so read on to learn all about them and how to protect yourself from their attacks.

Hacking is the application of technology or technical knowledge to overcome some kind of problem or obstacle. Note that our definition does not intentionally include anything of a criminal nature. Although many hackers can and do use their abilities for evil purposes, and although many people associate hacking solely with criminal or security hacking, the concept goes further.

There are many types of hacking, although in this article we will focus on the world of computer hacking. If we asked people to define what hacking is, we would get two lines of response:

Traditional hackers refer to criminal subversion of a security system as ” cracking ” (“to break,” from the English verb used, for example, when a bank robber opens a safe). So what is a hacker? To put it simply,  a hacker is someone who applies their computer skills to solving a problem .

What are the three types of hackers?

Depending on their motivations, hackers can belong to three groups: black hat, white hat, and gray hat. Let’s see what they are and what distinguishes them from each other.

A  black hat hacker  is the shady cybercriminal described above. They are those who break cybersecurity systems to gain illegal access to a computer or a network.

If a black hat hacker discovers a security vulnerability  , they will exploit it or alert other hackers to the opportunity, usually for a price.

Most of the time, the ultimate goal of a black hat hacker is to make money, whether through direct financial theft, sale of compromised information, or extortion. However, sometimes they just try to cause as much chaos as possible.

The  white hat hackers  are the counterpart of the black hat. They are just as skilled, but instead of having criminal goals, these caring souls dedicate their talents to helping companies prepare their digital defenses. A white hat hacker will intentionally try to break into a system, with its owner’s permission, to identify weak spots that need to be repaired. This type of work is also known as “ethical hacking.”

Many white hat hackers work for large companies as part of the organization’s cybersecurity strategy.

Others offer their services as consultants or vendors, and are hired to test the security of a company.

They can go beyond penetration testing (assessing the strength of a cybersecurity system) and also test employees themselves with  phishing campaigns  aimed at taking over their login credentials.

Between these two types are the  gray hat hackers . They are neither the height of altruism, like white hat hackers, nor are they dedicated to committing crimes. While white hats get permission before testing a system for vulnerabilities, gray hats skip that part and go straight for the hack.

Some behave like mercenaries: they look for weaknesses and then turn to companies to offer their services, for a price. Others hack to force reluctant companies to take action against a certain weakness. A  notable gray hat hack from 2013  got Facebook to recognize and fix a security flaw, despite previously ignoring warnings from hackers.

We can identify various types of hacking by dissecting security breaches. Individual hackers, private collectives, companies and governments perform security hacking when it serves their needs or desires. Let’s take a look at the three most common types of hacking.

Lone black hat hackers and hacking collectives are often thieves. Their cybercrimes seek to  steal money directly, prepare a subsequent theft by hijacking data or sell the obtained data  to other cybercriminals.

If a hacker gets hold of your user credentials, or even small personal data, they may try to break your password or catch you in a phishing attack. In any case, the ultimate goal is to turn the victim’s money into the hacker’s.

Data breaches are a frequent example of hacking for financial reasons. Hackers sneak into a website’s servers, capture data about the site’s users, and then sell it. In 2017, the US credit bureau  Equifax announced that it had suffered a colossal data breach  that had affected more than 147 million people.

The leaked data included not just names and dates of birth, but also social security and driver’s license numbers, as well as hundreds of thousands of credit card details. The loss of so much valuable data left many customers exposed to  identity theft  and fraud.

Competition in some industries is so fierce that it is not surprising that companies are often willing to get their hands dirty in order to beat their rivals.

Corporate (or industrial) espionage is  the commercial application of hacking ,  malware ,  phishing, and other nasty espionage techniques in  order to obtain inside information from a commercial competitor; this is also known as information hacking.

Sometimes it consists of something as simple as capturing a disgruntled employee, but in other cases more technological solutions are used. In 2017,  the United States Attorney’s Office indicted three people in connection with the Internet security company Boyusec  (or Guangzhou Bo Yu Information Technology Company Limited) for corporate hacking. The defendants hacked into various companies, such as Moody’s Analytics and Siemens, to obtain trade secrets and protected intellectual property.

Later, cybersecurity researchers would connect Boyusec with the Chinese hacker group APT3, or Gothic Panda,  allegedly related to the Ministry of State Security of China , which is great for us to present the third part of our trilogy …

The potential rewards of security hack can be so great that even governments want to join the party.

Countries around the world are engaged in a constant game of cat and mouse, a hidden cyberwar. Everyone knows that others perform these activities, but they act surprised and offended when they are caught red-handed.

Sometimes governments (and state-sponsored hacker groups)  directly attack other governments . However, the most common is to see  state-supported hackers attacking corporations or institutions such as banks or national infrastructure networks .

In July 2019, Microsoft acknowledged that, over the past year, it had informed nearly 10,000 people that they had been the target of  state-sponsored hacking attempts .

Most of the attacks were related to groups allegedly linked to Russia, Iran and North Korea. State-sponsored hacking is quite difficult to prove, as governments often distance themselves from those responsible through the use of intermediary groups.

Whether or not the hack is a  cybercrime  depends on one thing: consent.  White hat hackers seek permission from their targets before hacking into their systems and are required to disclose any vulnerabilities they find. Outside of this context, security hacking is illegal.

Rogue hackers operate without consent and break the law. No one is going to grant permission to a hacker who kindly explains that what he is looking for is money or valuable trade secrets, so black hats always operate in the shadows. Even the gray hat hack can be dangerous if the recipient decides to report it to the authorities after the action is revealed.

It goes without saying that if you are the victim of a security hack, it is totally illegal. If something like this ever happens to you, be sure to  report the scam  or event immediately. In this way you can try to reduce the damage suffered, in addition to preventing future victims from going through the same thing.

Devices most vulnerable to hacking

With sufficient time and resources, there is no way of knowing what a skilled hacker can achieve. Many multinationals have been humiliated by motivated hackers determined to violate their security measures, no matter how strict.

However, when we consider the types of devices available in a typical home or office, some are certainly a much easier target than others. While an iPhone can be extremely rugged, the same cannot be said for many other consumer digital devices. Here is a short list of some of the most vulnerable devices you may have:

To prevent hackers from sneaking into your network or any of your devices, you must use a robust cybersecurity tool, such as  Avast Free Antivirus . Avast employs six layers of protection, plus cloud-based artificial intelligence, to block 1.5 billion malware attacks every month. Spot weaknesses in your home Wi-Fi network, eliminate insecure passwords and settings, and avoid phishing scams and viruses – all for free.

“My account was hacked!” Whenever something goes wrong on  social media , this defense is the best friend of the famous. If you are not careful with your passwords, it is very easy for a hacker to take control of one of your accounts. Once inside, they can post on your behalf, access private content, and communicate with your contacts .

Want to check if any of your email or social media accounts have been leaked? Visit our free HackCheck tool   to search for leaked passwords.

How frequent is social media hacking? Search Google for “Facebook hacking”, for example, as we did to find relevant news to share in this article, and instead of getting news, you will see a list of tools to hack Facebook. Of course, we do not recommend that you repeat the experiment or visit any of the links provided. 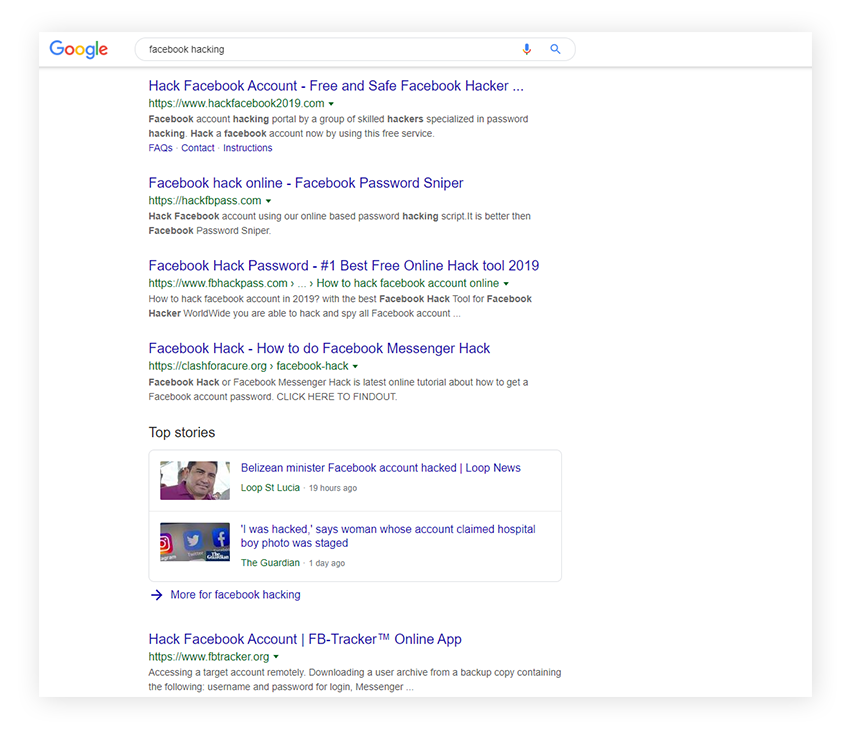 How to know if I have been hacked

Depending on the type of malware the hacker uses, the signs of a hack may differ. Here is a short list of things you can see if a hacker has infiltrated one of your devices:

To see if you have been hacked or if your information has been involved in a leak, consider using specialized privacy protection. Avast BreachGuard  protects your private information 24/7 . We constantly analyze the dark web, where hackers buy and sell leaked personal data. If your information is detected, we will immediately contact you so that you can protect your accounts and prevent identity fraud.

Tips to prevent a hack

Hackers are like lions: they attack those targets that they identify as least capable of protecting themselves. By taking some quick preventative measures, you can make it very difficult for hackers to infiltrate your new defenses, and this will surely make them hunt for easier prey.

Protect yourself from hacking with Avast Free Antivirus

The world of hacking is huge. There are so many methods of practicing it that there is no general remedy that will solve the whole problem. If you focus on the major hacking sources (malware and phishing), you will become a much less attractive target.

Hackers use malware to hack and hack to introduce malware to your device. Avast Free Antivirus  is continually updated to protect you in real time from malware threats as they appear. It detects, blocks, and removes malware and phishing attempts, as well as alerting you to two other popular hacking vectors: unprotected Wi-Fi networks and outdated software.