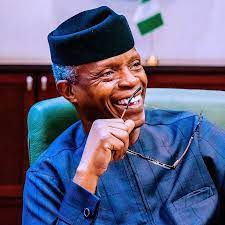 Vice President Yemi Osinbajo has expressed disappointment with the Central Bank of Nigeria’s (CBN) delay in disbursing funding for essential projects in the Economic Sustainability Plan.

This comes as he called on the Central Bank of Nigeria (CBN) to devalue the naira because currency rates are “artificially low”.

Osinbajo disclosed this at the Ministerial Performance Review retreat, organised to assess progress made towards the achievement of the nine key priorities of the regime, and presided over by President Muhammadu Buhari.

What the VP is saying
The Vice President said that “progress has been much slower than envisaged. There are continuing delays in the disbursement of funds from the CBN.

“The Debenture agreement for the sum of N200bn with the CBN which represents the bulk of the financing was agreed in April and has been signed by all.”

The Vice President listed the CBN’s unwillingness to disburse funds and public and private financial institutions’ risk aversion, particularly for power projects, as some of the major obstacles to the ESP Solar Electrification Program’s implementation, which aims to create jobs, grow the local solar industry, and deliver power to 5 million families in off-grid, under-served regions through new solar connections.

He said the ESP’s Agric plan was also experiencing funding difficulties. Only N14 billion of the N471 billion in loans to farmers across 14 agricultural value chains has been disbursed to commercial banks, according to Osinbajo.

He however, added that due to the late release for the wet farming season of 2021, farmers are yet to use the funds.

In case you missed it
Vice President Yemi Osinbajo has urged the Central Bank of Nigeria (CBN) to allow the naira to reflect market realities.