The latest market survey, carried out by reveals the prices of staple food items such as spaghetti, cooking gas, beans, palm oil among others spiked in September 2021 compared to the previous month (August 2021).

The sudden spike in the prices of the items has been attributed to a couple of infrastructural factors, scarcity of forex, as well seasonal fluctuations affecting agricultural food produce. Some traders attributed the increase in the price of cooking gas, palm oil and groundnut oil to the scarcity of forex, which is affecting the cost of importation.

A cursory look at the inflation figures from the National Bureau of Statistics shows that Nigeria’s food index surged by 21.03% year-on-year in July 2021, while it recorded a 0.86% increase when compared to the previous month. 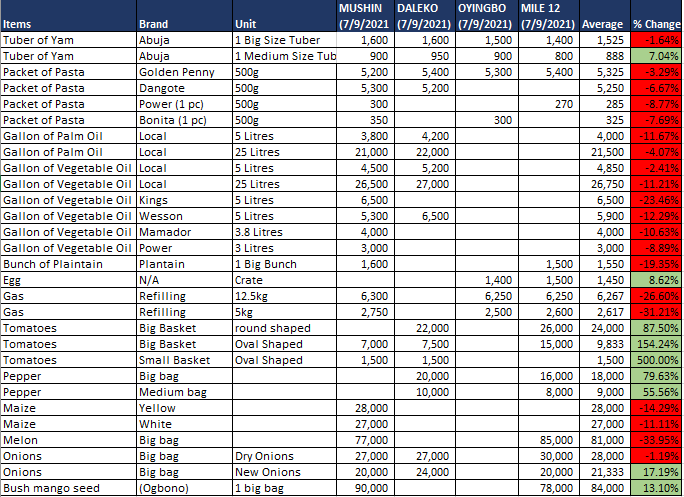 The cost of filling gas in Nigeria has surged significantly recently as further confirmed by the latest gas report by the NBS, which revealed that the price of a 12.5kg cylinder of cooking gas increased by 3.11% month-on-month and 7.16% year-on-year in July 2021. In the same vein, Nairametrics research found that a 12.5kg cylinder increased by 26.6% in Lagos State in September 2021.

A brief visit to Sango Market in Ogun State, also showed a similar trend in the price of cooking gas as dealers started filling a unit kg of gas within the range of N500 and N600, depending on the store. This is a significant hike compared to the initial average of N300 and N350 it was sold for, in the area.

The price of melon in the month of September surged by 33.95% to sell for an average of N81,000 and sellers attributed the increase to increased rainfall across the country. According to some traders interviewed by Nairametrics Team, the recent downpour of heavy rain across the country has made it difficult to dry the melon so as to ensure supply.

In the words of Kelechi, a trader at Mile 12 market, “There is no much sun to dry melon after being harvest, which has caused a decline in the supply of the food item in the market. And as you know, when there is scarcity of any item, the price tends to Jack up.”

Similarly, Mrs. Adebayo from Mushin Market stated that, “The price of melon has increased significantly due to the constant heavy rainfall in the north as it is destroying the farmers’ crops, therefore, preventing them from drying.”

The price of groundnut oil and palm oil recorded notable price increases in September compared to the previous month. Traders surprisingly have attributed the increase to lack of sufficient forex and the constant depreciation of the Naira in the parallel market.

According to Mr. Ebihen at Mile 12 market, “Firstly the issue of dollar has caused huge increase in the prices of most items in the country, these have also come back to affect the likes of palm oil and groundnut oil.”

He stated further, “Secondly, most of the oil we consume in Nigeria are being imported from neighbouring countries and the unstable nature of our local currency continues to affect the cost and sales price of the food items.”

Nairametrics cited new influx of different varieties of tomatoes at the Mile 12 market. The varieties include the Yoruba Tomatoes, imported ones from Ghana and Kano tomatoes, as explained by Mr Kabiru, a trader in the market.

Meanwhile, Mr Lastborn an onion seller at the Mile 12 market explained to Nairametrics Team that dry onions are becoming scarce in the market due to seasonal fluctuations, which has affected the price of the commodity. However, a big bag of dry onions sells for an average of N30,000 at the Mile 12 market, while the new onions sell for an average of N20,000.

What NBS data is saying

According to the selected food price report by the foremost national statistical body of Nigeria (NBS), fresh mudfish recorded the highest month-on-month increase with a 66.89% increase in price to sell at an average of N1,815.27.

Tomotoes followed as the second food item with the highest price increases in the month of July 2021. Tomato is currently sold for any average N414.83 per unit measurement, frozen titus fish increased by 15.32% in July 2021 compared to the previous month, while a year-on-year analysis indicates a 30% price increase for tomatoes