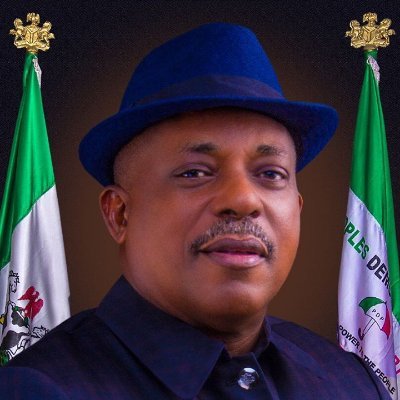 Prince Uche Secodus has said he is still the National Chairman of the Peoples Democratic Party (PDP).

The Publisher Nigeria gathered that He also said that the mandate given to him at the party’s National Convention in Abuja on December 9, 2017 remains intact until his four-year tenure expires in December this year.

He made the clarifications following his absence at the party’s 92nd National Executive Committee meeting held at its national secretariat in Abuja on Saturday amid speculations that he had been removed from office.

Secondus, in a statement sent to one of our correspondents from his media office, said his absence at the meeting was due to his decision to obey an interim order from Cross River State High Court.

Titled, “Secondus has not stepped down, just obeying Calabar court interim order,’ the statement was signed by his Special Adviser on Media, Mr Ike Abonyi.

The statement said, “The media office of Prince Uche Secondus wishes to correct erroneous news circulating that he has stepped down as the National Chairman of the Peoples Democratic Party.

“As a law-abiding citizen, who has been an adherent of the rule of law as a basis for democracy, stayed away out of respect for the courts.

“By this release, media office wishes to urge media houses and members of the public, particularly beloved members of PDP, to disregard any news suggesting that he has stepped down.”

Earlier on Saturday morning, Secondus had sent a memo to his deputy, Yemi Akinwonmi, directing him to preside over the NEC meeting.

The memo, titled, “NEC meeting of Saturday, August 28, 2021,” read, “I hereby request you to preside over the National Executive Committee of the party, taking place today, 28th August 2021 @12 noon, in my absence. Thank you.”

Secondus’ directive was believed to have been as a result of a court order from a high court in Calabar, which barred him from returning to office as the national chairman of the PDP.

The order came a few hours before the commencement of the NEC meeting which Secondus was meant to preside over.

Justice Edem Kooffreh granted the interim order while ruling on a motion ex parte filed by Enang Wani against Secondus and the PDP.

“The court barred Secondus from presiding over any meeting of the party until the motion is heard.

The court also restrained the PDP from recognising or granting Secondus the powers due to the office of the national chairman.

“An order of interim injunction restraining the second defendant, its members, officers and agents from recognising the first defendant as its national chairman or from according to him any of the powers, rights or privileges due to the holder of the office of the National chairman of the 2 Defendant pending the hearing and determination of the motion on notice,” the ruling read.

Kooffreh also ordered that the notice of the ruling be served to the parties by substituted means by “pasting at the entrance of the national secretariat of the Peoples Democratic Party at Wadata Plaza, Plot 1970, Michael Okpara Street, Wuse Zone 5, Abuja, in the Federal Capital Territory of Nigeria and by publication in two (2) National Newspapers in Nigeria”.

The matter was adjourned till September 7, 2021, for the hearing of the motion on notice.

It was the second time Secondus would be restrained by a court order from continuing in office as PDP National Chairman.

A Rivers State High Court in Port Harcourt, presided over by Justice O. Gbasam, had last week made the same order.

However, a few days later, a countermanding order by Justice Nusirat Umar of the Kebbi State High Court reinstated him to office.

The Cross River State court order is the latest in the unfolding crisis rocking the opposition party.

But at the NEC meeting on Saturday, its national leadership vowed not to allow the party to breakup.

The meeting also picked the Federal Capital Territory as the venue of the party’s elective national convention scheduled to hold between October 30 and 31.

Others were three former Presidents of the Senate, David Mark, Adolphus Wabara and Iyochia Ayu.

At the end of the NEC meeting, leaders of the party, while speaking with journalists, said they were determined to mend all the cracks in the party, adding that the PDP was strong in its resolve to displace the ruling All Progressives Congress from the Presidency come 2023.

The PDP NEC also said another meeting would hold December 9 where it would ratify and announce the composition of the various committees for its forthcoming convention.

The National Publicity Secretary of the party, Mr Kola Ologbondiyan, read the communiqué of the meeting to journalists.

Ologbondiyan said, “NEC has resolved that Abuja will be the venue of the PDP National Elective Convention slated for October 31, 2021.

“NEC (is) to meet on the 9th of September to approve the various nominations into the respective national convention committees.”

Ologbondiyan said the PDP NEC members also “emphasised the indivisibility of the party and stressed the need to remain united and work assiduously towards removing the ‘inept, indolent and corrupt APC’ from government, come 2023.”

He quoted the NEC as also urging PDP members to continue to make personal sacrifices in the overall interest of the party, while they expressed gratitude to governors elected on the party’s platform “for setting the pace in the development of infrastructure across Nigeria.”

Ologbondiyan also quoted the PDP NEC as saying that given its rich pool of experienced politicians, it was confident that the crisis currently rocking the party would be resolved and the party would be strong ahead of the 2023 general elections.

Ologbondiyan said, “The party boasts of more experienced hands in party politics as well as governance, and says its internal crisis management mechanism is far better than the operations of the All Progressives Congress as a party and even as government.

“NEC is confident that the PDP has earned the trust of Nigerians once again and our party will do better when given the opportunity to lead the nation.”

In his welcome address, Akinwonmi disclosed that the meeting was to take decisions on the forthcoming national convention.

He said party leaders across the board worked tirelessly within the last couple of weeks to foster cohesion in the party.

Akinwonmi said, “I am pleased to announce to you all that those interventions are yielding desired results. We must resist every attempt to show disunity in our ranks but to work together to salvage the country.”

In his remarks, the Chairman of the PDP Governors Forum and Sokoto State Governor, Aminu Tambuwal, said, “With reference to the issues of the moment; challenges, disputes and disagreements are part of life, and indeed, politics, what is important is how they are resolved. We have activated all mechanisms that we have in PDP, to resolve all of our issues and as the Chairman of PDP said, I concur. We shall continue to hold together, remain together because we are the hope of the people of Nigeria and Nigerians are looking forward to PDP and we cannot afford to fail them.

“The challenges are quite many and it’s important for us to continue to work together as a family. We are going into warfare and we must go to a warfare united, you cannot win if you are divided.

“So, let’s not lose hope. We must remain focused with our eyes on the ball. And we shall, by the grace of God, score that goal. Thank you very much.”

Also, the Chairman of the National Assembly Caucus of the PDP, Senator Enyinnaya Abaribe, said stories of cracks in the party were mere speculations.

He said, “I want to assure you that in the National Assembly, we are with our party. The Chairman and Deputy Chairman have, this morning, made statements to show that there is no crack in the PDP.

“As we were coming yesterday, I think we’ve seen from the news that there were alternate chairman deputies and all that. But today, I think it’s clear to everyone that the PDP is one and we’re moving forward.

“I want to thank the chairman of our governor’s forum for assuring us that the PDP will take over the government in 2023. Nigerians are looking for us.

“Nigerians are tired of that party that doesn’t even have a board of trustees, not to talk of any other organ of the party.”

Also speaking, former Vice President Atiku Abubakar noted that the PDP had the best in terms of experienced hands to deal with its internal challenges.

Atiku said, “So, I want to use this opportunity to commend and thank everybody who has been involved in trying to resolve the recent crisis. And Nigerians should no longer be in doubt, of our sense of patriotism, and our sense of commitment to get this country moving again.

“We are being taken aback by the APC government and we have shown to Nigerians that, when we are trusted again, we will do even much better than we had done before.”

Meanwhile, two Senior Advocates of Nigeria have described a situation where chieftains of the PDP got three different court orders on the same matter within three days as not healthy for democracy and the judiciary.

The two SANs,  Adegoke Rasheed and Remi Olatubora, spoke in different interviews with one of our correspondents.

Adegoke said politicians were playing on the intelligence of judges and abusing the court process.

He, however, called for sanctions to discourage such action among politicians, saying it was embarrassing for the country.

Adegoke said, “It is not good for our democracy and a foul way of playing politics which the Nigerian politicians have been using to rubbish the judiciary.

“When politicians from the same party go to different courts on the same matter to get different orders, they are playing on the intelligence of the court.”

In his reaction, Olatubora said the judiciary should not get involved in political conflicts.

He called on the body responsible for the discipline of judicial officers to take action against officers involved in the party’s feud.

He said, “The way court orders are flying around like locusts in the wake of the PDP leadership crisis is a great source of worry to all stakeholders in the justice sector.

“The judiciary should not get itself dragged into the murky waters of politics.

“I think we have got to a point at which the body responsible for the discipline of judicial officers should swing into action.

“Crisis is taking place in Abuja, conflicting court orders are flying in from Port Harcourt, Kebbi and Calabar. More may come in from Ondo or Malunfashi tomorrow. There is absolutely a lot wrong with such a system.”