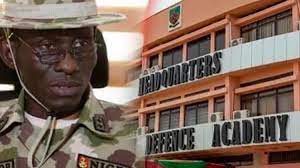 The Publisher Nigeria gathered that when the gunmen entered the NDA permanent site along Airport Road, Afaka, in the Igabi Local Government Area of Kaduna State around 1am, they came through a broken fence and caught the residents unawares.

It was learnt that the gunmen, who headed in different parts of the premises, caught the officers on duty off guard because they were wearing military uniform.

It was gathered that the situation was worsened by the fact that officers, who were manning the institution’s Closed Circuit Television cameras were caught napping and could not raise the alarm when the bandits stormed the academy.

A source stated that the attackers had already wreaked havoc and subdued the few soldiers who tried to resist them, when residents got to know about the attack.

The military authorities, who were embarrassed by the invasion, had started compiling the names of errant personnel to be court-martialled.

It was learnt that besides the two officers, who were killed, another officer, 2nd Lt Onah, who was injured during the attack, was receiving treatment in a medical facility within the institution.

A top military officer, who confided in The PUNCH, stated, “In a Gestapo style, gunmen in military camouflage invaded the NDA, gunning down two officers, a naval officer and an air force officer, after gaining access to the well-fortified institution.

“The gunmen came in large numbers. They were fully kitted in military camouflage and forced their way into the academy before proceeding to the officers’ quarters. Their targets were probably the cadets (students).”

Sources explained that the embarrassing attack on the academy could have been foiled if the security guards were alert and vigilant.

A source stated, “Preliminary findings revealed that the security guards were either asleep or not on duty during the attack. Further investigation will show what aided the attack; whether it was insiders’ connivance, negligence or dereliction of duty by the guards or other extraneous factors or circumstances.”

The military institution is opposite the Federal College of Forestry Mechanisation, Afaka, where 39 students were abducted by bandits on March 11, 2021. The bandits had demanded N500m to free the captives a few days after the abduction.

But they were released after spending 50 days in the bandits’ den following the intervention of former President Olusegun Obasanjo and controversial Islamic cleric, Sheikh Ahmad Gumi.

We lost two officers, another was kidnapped by gunmen – NDA

Confirming the attack, the NDA spokesman, Major Bashir Jagira, said in a statement on Tuesday that the security architecture of the institution was compromised, hence the gunmen gained access to the well-fortified institution.

He added that the institution, in collaboration with the 1 Division of the Nigerian Army, Kaduna, and the Nigerian Air Force’s Training Command had launched a manhunt for the attackers.

The NDA spokesman stated in a statement titled, ‘Security breach of the Nigerian Defence Academy architecture’, that the cadets and the community were safe.

Jagira said, “The security architecture of the Nigerian Defence Academy was compromised early this morning (Tuesday) by unknown gunmen, who gained access into the residential area within the academy in Afaka. During the unfortunate incident, we lost two personnel and one was abducted.

“The academy, in collaboration with the 1 Division, Nigerian Army, and the Air Training Command as well as other security agencies in Kaduna State, has since commenced the pursuit of the unknown gunmen within the general area with a view to tracking them and rescuing the abducted personnel.

“The NDA community and the cadets are safe in the academy. We assure the general public that these unknown gunmen will soon be apprehended and the abducted personnel rescued.”

The attack generated angry reactions from groups, including the Arewa Consultative Forum and the Southern Kaduna Peoples Union.

While the pan-northern organisation, the ACF, described the incident as “terrible,” SOKAPU said the attack never came to it as a shock and warned that it would set the stage for what is currently happening in Afghanistan to occur in Nigeria.

The ACF, through its National Publicity Secretary, Emmanuel Yawe, said the attack highlighted the parlous state of security in the country.

The ACF spokesman spoke with one of our correspondents in Kaduna on Tuesday shortly after the attack.

He said, “It’s a terrible development. It underscores our parlous state of security in Nigeria and the uncountable calls by the ACF and others for something to be done by the government to improve our collective security.

“The latest security breach is another embarrassment to the ACF. The NDA is a proud monument of the efforts of the first generation of northerners, who fought hard to bring development to the North; the likes of Muhammadu Ribadu, Sir Abubakar Tafawa Balewa and Sir Ahmadu Bello, who brought the institution to Kaduna. They did not bring it here for our generation to hand it over to bandits or whatever we call them.

SOKAPU, an umbrella body of the Southern Kaduna people, condemned the attack.

It noted that if nothing was done on the current attack, the regime of the President, Major General Muhammadu Buhari (retd.), might be rehearsing a “script.”

The spokesman for SOKAPU, Luka Binniyat, said in an interview with The PUNCH that the impunity and daring way in which the attack was carried out without any casualties on the part of the invaders pointed to a more serious danger to Nigeria’s democracy.

He stated, “This attack, the killing of two officers and the kidnapping of another one at the NDA, to be honest, did not come to SOKAPU as a surprise at all. This is because even the barracks of the Command and Staff College, Jaji, which is between Zaria and Kaduna, has been invaded a few times this year by the same armed men, who went away with cattle and other loot.

Binniyat warned that if drastic measures were not taken to apprehend the armed men, there could be a repeat of the situation in Afghanistan in Nigeria.

“The President’s past words, actions and controversial policies show that he may not mind transferring power to such a crop of extremists.

“Perhaps, this unfortunate and unacceptable development will wake up everyone to the reality that apart from Buhari, his governors and maybe, service chiefs, we are all sitting ducks in the hands of outlaws, who may be executing a sinister agenda to take over Nigeria.

“We are calling on all moderate Muslims, all Christians and all men of honour and courage to stand in unity and denounce this shameful development and call Buhari and Governor Nasir el-Rufai of Kaduna State to take their primary responsibility seriously before we sink lower than we have ever imagined.”

We are sad, says KDSG

On its part, the Kaduna State Government expressed sadness over the attack on the NDA.

The Commissioner of Internal Security and Home Affairs, Samuel Aruwan, in reaction to the incident, said Governor El-Rufai had been briefed about the incident.

He said the governor also conveyed his heartfelt sympathy to the institution, the immediate families of those killed by the bandits as well as the family of the abducted officer.

A security expert, Hassan Stan-Labo, said because of the spate of attacks in the area, where the academy is located, the military should have known that bandits would attack the facility.

He stated, “The attack on the NDA is a surprise to me. It is a military institution; one expects tight security around it given the fact that the area, where the institution is located, is an area where bandits have been operating and with the abduction of schoolchildren in the area, one expected that the NDA would have taken precautions.

“Being a military installation, it is a prime target for the bandits. They should have known that the bandits would want to embarrass them and the country.

“For this attack to have taken place, I am surprised. It is disturbing. The military authorities should have foreseen this.”

Another security expert, Nnamdi Anekwe, said, “The attack on the NDA is unfortunate and unexpected.

“Although the NDA is a very big facility, normally it should have tight security to prevent such attacks and there should have been regular patrols of the Afaka area as it seems to be the base of bandits.

“A lot of kidnap activities have been happening in that area and that made it not surprising to me.

“I think this is due to the civil-military relationship, which allowed civilians access into the facility, but there should have been proper security arrangements in place to prevent such an attack.

“We should not be having this kind of an attack on our military institutions; it is quite embarrassing to the military leadership.”

Another security expert, Timothy Avele, said with the attack on the NDA, the worst had yet to come.

He stated, “Attacking the NDA is bad in itself. But killing and kidnapping officers from a supposedly secured military facility are a total security breakdown.

We’re in pursuit of attackers – CDS

The Chief of Defence Staff, Gen. Lucky Irabor, in a statement by the Director Defence Information, Maj.-Gen. Benjamin Sawyerr, stated, “The gallant troops of the Armed Forces of Nigeria, in joint operations are in hot pursuit of bandits that attacked the offices’ quarters of the prestigious Nigerian Defence Academy, in Kaduna early hours of August 24, 2021.

“The gunmen who sneaked in after breaching the perimeter fence went straight to the officer’s living quarters and started shooting sporadically. Unfortunately, two brave and gallant officers paid the supreme price, while one other officer was abducted by the bandits in the process.”