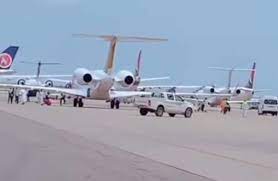 Nigerian leaders from the ruling All Progressives Congress and the opposition Peoples Democratic Party, including past and present governors, and other dignitaries displayed wealth frontally on Friday by flying over 100 private jets to Kano State to attend the wedding of Yusuf, the son of President Muhammadu Buhari.

Amid the country’s rising debt profile blamed on wasteful expenditure by the leadership, over 100 private jets touched down on Friday at the Mallam Aminu Kano Airport owned by politicians and other affluent people attending the wedding.

The wedding between Yusuf and Zahra, daughter of Emir of Bichi, in Kano, has been tagged the merger of presidency and royalty by social observers.

The marriage of the new couple has been the talk of the town on social media for months.

“As we speak, there are more than 100 private jets at the Kano airport. You can hardly find a flight to Kano from anywhere since Wednesday. All the five-star hotels in this state have been booked. Kano is currently choked up. There is traffic congestion everywhere for Buhari’s son’s wedding,” a resident stated.

According to a statement by Garba Shehu, the President’s Senior Special Assistant on Media and Publicity, Buhari had sent a high-level delegation led by Professor Ibrahim Gambari, his Chief of Staff, to make preparations for the wedding.