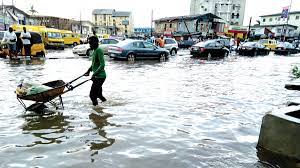 Friday’s torrential rainfall in various parts of Lagos and Ogun State has led to flood incidents in the two states.

This was confirmed by some celebrities who shared videos on their Twitter accounts.

Residents were forced to stay indoors or seek makeshift shelters while in transit as various streets were covered in floodwater. The heavy rain also slowed the free flow of traffic, creating gridlocks in many parts of the Lagos metropolis.

Some of the affected areas are Marina, Lekki, Agege, Iju Road, Victoria Island, Oshodi, Ilupeju, Ogudu, Ketu and Magboro among other parts of the states.

Lagos Marina under water today due to incessant rains all day long. pic.twitter.com/1ijjB6fP5f

On the Long Bridge axis of the Lagos-Ibadan Expressway, the traffic was heavy inbound Lagos. Similarly, many commuters around the Magboro axis of Ogun state were stranded while some vehicles got stuck in the flood.

What NEMA is saying about flood

Acting Assistant Zonal Coordinator, NEMA Southwest Zonal Office, Ibrahim Farinloye, said in a statement issued on Friday, ”Once the rainwater gets to half of the wheels, it sweeps off your vehicle, kindly park and move on to higher ground for safety.

”The rainwater must have risen above our ankles, once it happens like this, the flood has the capacity to carry you off.”

The 2021 Annual Flood Outlook has predicted more flooding to be experienced in the 13 local government areas listed above.