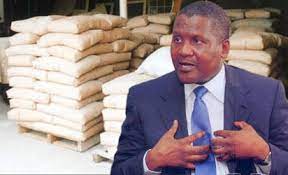 The Federal Executive Council (FEC), on Wednesday, approved the award of road contracts to Dangote Industries at the cost of N309.9 billion.

The 5 road projects with a combined total length of 274.9 kilometres of federal roads under the Federal Government Road Infrastructure Tax Credit Policy will be handled by Dangote as tax credit.

The Publisher Nigeria gathered that this disclosure was made by the Minister of Works and Housing, Babatunde Fashola, during a briefing of State House correspondents on Wednesday in Abuja after the FEC meeting presided over by President Muhammadu Buhari.

Fashola explained that the road contract, which was the second approved for his ministry by the council, would be implemented on concrete and would be the largest of such projects in the country.

What the Minister of Works and Housing said

Fashola said that this initiative by the Federal Government is also part of its multiple funding options with the private sector.

He said, “The second memorandum presented by the Ministry of Works and Housing was for the construction or the reconstruction, as the case may be, of five road projects in favour of Messrs. Dangote Industries Limited, totalling 274.9 kilometres of federal roads, under the Federal Government Roads Infrastructure Tax Credit policy, which is one of our strategic partnerships with the private sector.

Going further, the Minister listed the roads to include Bama to Banki in Borno State for N51.02 billion running into 49.15km; Dikwa to Gamboru-Ngala, 49.58km, in Borno State for N55.5 billion; and the Nnamdi Azikiwe Road, popularly known as Western Bypass in Kaduna, 21.48km, from Command Junction to Kawu, in the sum of N37.56 billion.

Others are the deep seaport access road sections 1 and 3 in Lagos State, through Epe to Shagamu Expressway, 54.24 km, that links Lagos and Ogun states, in the sum of N85.84 billion; the Obele/Ilaro/Papalanto to Shagamu Road, 100km, in Ogun State, in the sum of N79.99 billion.

He also said, “Council considered and approved this memorandum, to facilitate the construction of 274km of concrete roads. So, this will be the largest single award of concrete roads ever undertaken by the government of Nigeria in one award.”

While speaking on the conditions surrounding the contract, Fashola said, “First of all, the award is consistent with our multiple funding options, which includes engagement with the private sector.

Secondly, the tax credit initiative was in existence in the last administration before this government but was not utilised. So, this administration has revised it, expanded it, and has used it to construct roads like the Apapa Wharf Road, the Oworonsoki to Apapa, through Oshodi Road, by the same Dangote Group.”

He said the list included the Obajana-Kabba Road (still the Dangote Group) and the Bodo-Bonny bridges and road, which council approved last week, through the NLNG.

The Minister further revealed that this initiative is not unique to Dangote as there is also interest from many other companies which are being reviewed.

Similarly, it can be recalled that in April 2021, the Federal Inland Revenue Service (FIRS), announced the issuance of tax credit certificates valued at N22.321 billion to Dangote Industries.

The tax credit certificates were for the construction of Apapa-Oworonshoki-Ojota road in Lagos and the Lokoja-Obajana-Kabba road that goes through Kogi and Kwara States.

The issuance of tax credit certificates followed the signing of Executive Order 07 of 2019 by President Muhammadu Buhari, which is on road infrastructure tax credit.

The order encourages companies to develop infrastructure around their operational area as long as it will enhance their delivery and their businesses.

Under the Credit Tax Scheme, participating companies are to recover the cost incurred by them in the construction or refurbishment of eligible roads as credit against Companies Income Tax (CIT) payable.