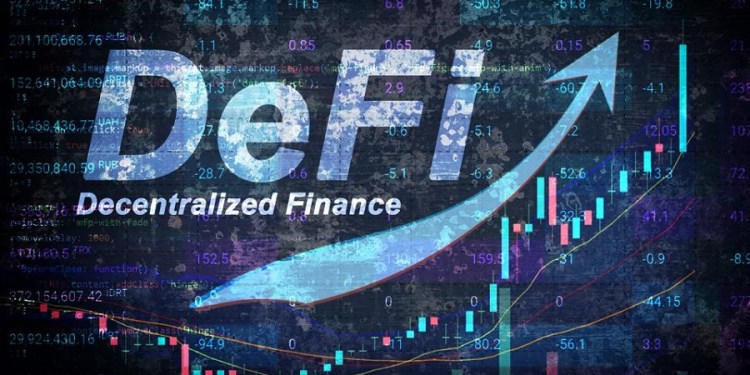 Decentralized Finance (DeFi) is a new financial system that operates independently and does not rely on centralized financial intermediaries like banks, credit unions or insurance funds. Instead, users can transfer, trade, invest and transact peer to peer using cryptocurrencies via automated smart contracts which eliminate the need for slow and costly intermediaries.

DeFi is possible as a result of advanced distributed ledger technology (DLT), popularly known as a blockchain. DeFi improves the use case of blockchains as simple data storage or value transfer to a more complex, interactive and functional financial use case such as trading, lending, yield farming, flash loans and derivatives.

The DeFi industry boomed in 2020 during what was called the ‘DeFi Summer,’ where the total value locked (TVL) in DeFi smart contracts rose sharply from a few hundred million dollars to more than $20 billion in a matter of months. While this is still small when compared to the traditional financial systems, interest and investment in the industry does not appear to be slowing down anytime soon. As of the time of writing this report, the TVL on DeFi platforms is approximately $111.92 billion, up 440% Year-to-Date (YtD).

Why the Need for DeFi?

Traditional finance, asides from being slow and costly to its customers, is also vulnerable to hacks, data breaches and security failures. The colonial pipeline is a prime example. There have been lots of rug pulls and scams associated with DeFi platforms with total losses in cryptocurrency as a result of scams amounting to $432 million as of the end of April. 56% of these scams came from DeFi platforms which represent $240 million. However, in 2020, traditional finance accounted for $1.8 billion in cyber fraud losses that were reported by men and women aged 50-plus, representing a 27% hike from 2019. These losses were not associated with cryptocurrencies.

Asides from these facts, traditional financial systems are inaccessible to millions of people who do not meet the criteria for opening a bank account. This may sound odd to those in developed or wealthy regions, as access to financial services is easy, but insufficient identification, limited access to capital, geographical isolation and government oppression restricts millions of people around the world from accessing traditional financial services which have been the instrument of creating wealth. The lack of access to financial services in these nations has hindered their growth process. This was the case in El Salvador and is why the President decided to pass Bitcoin into law as a legal tender, with the sole aim of banking the unbanked.

DeFi is needed because cryptocurrencies and DeFi do not discriminate and allow anyone with an internet connection to access financial services easily, cheaply and equitably, without crazy charges from middlemen. DeFi gives everyone in the world an equal opportunity to access and earn from financial services.

The founder and CEO of Curve is Michael Egorov, a Russian scientist who has various experiences with cryptocurrency-related enterprises. He co-founded and became CTO of NuCypher in 2015, a cryptocurrency business building privacy-preserving infrastructure and protocols.

Curve has gained considerable attention by following its remit as an AMM specifically for stablecoin trading. The launch of the DAO and CRV token brought in further profitability, as it is awarded to users based on liquidity commitment and length of ownership.

The platform has $9.4 billion TVL, making it the biggest DeFi platform in the world. Its native token CRV has gained approximately 160% YtD, currently trading at $1.66 as of the time of writing this report.

Aave is an Open Source and Non-Custodial protocol that allows its users to earn interest on deposits and borrow cryptocurrency assets. Lenders earn interest by depositing digital assets into specially created liquidity pools. Borrowers can then use their crypto as collateral to take out a flash loan using this liquidity.

Aave was founded by Stani Kulechov. He created Aave because at the time, he was frustrated at the lack of lending applications on the Ethereum network and his project was built before decentralized finance became public notice.

Aave has several unique selling points when compared with its competitors. The DeFi market is highly competitive as many cryptocurrencies are looking to break into the market. The project allows people to borrow and lend in about 20 cryptocurrencies, meaning that users have a greater amount of choice. One of Aave’s flagship products is “flash loans,” which have been billed as the first uncollateralized loan option in the DeFi space.

The platform has $9.31 billion TVL, making it the second-largest DeFi platform in the world. Its native token AAVE has gained approximately 240% YtD, currently trading at $294 as of the time of writing this report.

InstaDapp aims to drive interoperability between protocols for power users and ease of development, allowing developers of all stripes to start leveraging the full potential of Decentralized Finance. On Instadapp, users and developers manage and build their DeFi portfolio.

The main functionalities of the protocol are account extensions and upgradability. The unique upgradability means that the upcoming and new extensions will be upgraded, maintained and managed by INST governance.

Compound is an algorithmic, autonomous interest rate protocol built for developers to unlock a universe of open financial applications. It is a DeFi lending protocol that allows users to earn interest on their cryptocurrencies by depositing them into one of the pools supported by the platform.

Compound’s open lending platform allows anybody who deposits supported Ethereum tokens to easily earn interest on their balance or take out a secured loan, all in a completely trustless way.

The platform has $7.17 billion TVL. Its native token COMP has gained approximately 177% YtD, currently trading at $412 as of the time of writing this report.

Wrapped Bitcoin is a tokenized version of Bitcoin (BTC) that runs on the Ethereum (ETH) blockchain. It is the first ERC20 token backed 1:1 with Bitcoin, completely transparent, 100% verifiable and is community-led. Being backed 1:1 to Bitcoin also ensures that its price is pegged to Bitcoin at all times and allows users to transfer liquidity between the BTC and the ETH networks in a decentralized and autonomous manner.

WBTC is the ERC-20 (Ethereum Network Short Code) standard of Bitcoin which enables full integration of a Bitcoin-like asset into an advanced environment of financial decentralized applications, bringing along the immense liquidity associated with the BTC market.

The platform has $6.51 billion TVL. Its native token WBTC moves 1:1 with Bitcoin which means it has gained approximately 14% YtD, currently trading at $33,134 alongside Bitcoin, as of the time of writing this report.

DeFi platforms are gaining media attention. Recently, JPMorgan CEO, Jamie Dimon and two senior analysts predicted that Ethereum 2.0 could grow the staking Industry to $40 billion by 2025. Asides from this, many analysts have predicted that one day, Ethereum’s market capitalization will surpass that of Bitcoin because of the blockchains uniqueness to support decentralized finance smart contract applications.