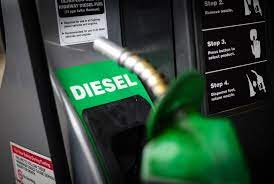 The price of a litre of Automotive Gas Oil, also known as diesel, has maintained an upward trend as it rose to a record high of N290 this week.

The Publisher NIgeria learnt that the price of a litre of diesel had increased to N280, buoyed by the recent increase in global oil prices and naira devaluation.

In February, when the global oil benchmark, Brent crude, averaged $62.28 per barrel, the price of diesel, which is not regulated by the government, ranged from N220 to N250 per litre in Lagos.

Brent crude, which has been trading above $70 per barrel since the start of June, increased to $74.27 per barrel as of 8:06pm Nigerian time on Thursday.

Our correspondent observed on Thursday that the price of the diesel ranged from N275 to N285 per litre in several filling stations in Lagos.

Mobil, Capital Oil and Gas, Fatgbems as well as Oando filling stations, all along the Lagos-Ibadan Expressway, sold the product for N290, N288.9, N285 and N275 per litre respectively.

Diesel is mostly used by businesses to power their generators amid a lack of reliable power supply from the national grid.

The President, Association of Small Business Owners of Nigeria, Mr Femi Egbesola, had last week described diesel price hike as alarming, saying, “It is just too much for us to bear.”

The National Bureau of Statistics, in its latest diesel price watch report, said the average price paid by consumers for the product increased by 0.69 per cent month-on-month and by 8.99 per cent year-on-year to N238.82 in May from N237.19 in April.