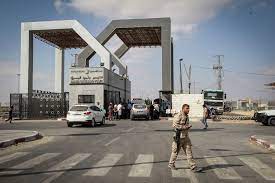 Facts have emerged about how security agents and border communities aid smuggling of petroleum products, thus worsening the fuel subsidy crisis in the country.

Our correspondents, who visited border communities in Ogun, Adamawa, Katsina, Sokoto, Borno, Taraba and Kwara states, observed how security agents turned a blind eye to petroleum products smugglers after receiving bribes from them.

Recall that the President, Major General Muhammadu Buhari (retd.), had in a memo issued through the Nigeria Customs Service on November 6, 2019, ordered that petroleum products should not be supplied to petrol stations within 20-km of borders as part of efforts to check the smuggling of the products.

But the Group Managing Director of the Nigerian National Petroleum Corporation, Mele Kyari, on Wednesday last week partly attributed the rise in Nigeria’s daily consumption of petrol to 102 million litres in  May to smuggling.

The Publisher Nigeria gathered that petrol landing cost increased to N232, while subsidy on the product rose to N5.58bn.

In Katsina State smuggling of petrol was a lucrative business in border communities.

Although petrol sells for between N163  and N 165 per litre in the state,  smugglers, who buy the product in Nigeria, sell thrice that price in the Niger Republic.

The state shares borders with the  Niger Republic at  Magamar-Jibia and Kongolam.

But it was gathered that there were more than 1,000 illegal routes that were used by petrol smugglers.

A commercial driver, who plies the Katsina-Jibia route, revealed that fuel smugglers were both Nigeriens and Nigerians.

Another commercial driver stated, “The security agents on the  Katsina-Jibia highway cannot claim not to know the smugglers. Once the  security agents are given money depending on the quantity of the smuggled fuel and the bargaining power of the driver , the smugglers move freely along the highway until they get near Jibia where they make a detour  to  illegal routes instead of passing through the official border at Magamar-Jibia.”

A community leader in Jibia, Mallam Gide Dahiru, in an interview with The PUNCH, said security operatives should be blamed for fuel smuggling.

Gide, who is the Chairman of Jibia People’s Forum, said, “Instead of labelling our people smugglers,  security operatives at the various checkpoints between Katsina and Jibia should be blamed. We have over 30 checkpoints along this highway, smugglers still find their way.”

The Spokesman for the Katsina State Police Command,  Gambo Isah, said the ban on the sale of fuel within 20 kilometre-radius of border communities was still in force.

He added police had been arresting those who violated the ban.

In Taraba State, residents of border communities told one of our correspondents that petrol smuggling was a lucrative business for security personnel manning border routes in Kashimbila in the Takum Local Government, Abong in the  Kurmi LGA and Maidaga and Hainare in the Sardauna LGA.

YOU MAY ALSO LIKE:   N-Power: 550,000 Applicants Qualify For Final Selection

A resident, who spoke on condition of anonymity, said on a daily basis truck loads of petrol accompanied by armed security personnel moved out of Takum and Baissa in the  Kurmi Local Government to the Republic of Cameroon.

According to the source, some Ambazonian rebels in Cameroon with Nigerian business collaborators including bad elements in the  police, Army, immigration and Customs  are involved in the  smuggling of fuel.

Another eyewitness told The PUNCH that in the Sardauna Local Government Area,  there were smugglers, who used informal routes.

He stated, “When they are caught, they bribe their way through. There are also others who come in to smuggle precious stones mined in Sardauna and because of the huge money they get from gold, blue Sapphire and other precious stones, security personnel too are in the business of smuggling these items.”

Taraba State Police Command’s Public Relations Officer,  David Misal, did not reply to a text message sent to his phone nor pick his  calls as of  the time of filing this report.

The Public Relations Officer of the NCS in Borno and Yobe states, Joshua Iliya, in an interview with The PUNCH, admitted that there was petrol smuggling  in the states

Iliya, however, blamed border communities for the crime. He stated, “They work in active collaboration with the villagers. The villagers know them. They are part of the villagers and some of them are often being celebrated as heroes in those communities.

“When our personnel go on patrol, the residents inform them of our presence and the smugglers will refuse to show up until we leave. Some of them often buy phones for their informants.”

In Adamawa State, a security agent, who spoke to one of our correspondents in confidence, said the Federal Government’s ban on sale of fuel within  20- kilomtre radius of borders was being flouted.

A resident of  Belel, a border community in the Maiha Local Government Area of the state, Abubakar Idris,  said there was a  depot of petrol in the area for smugglers of fuel to Cameroon.

In Kwara State border communities, smugglers buy petrol at filling stations in Baruten and Kaiama local government areas which share borders with the Republic of Benin.

No fewer than 100 fuel stations exist in the two rural local areas.

The Publisher Nigeria learnt that although security agents, under the aegis of the Joint Border Patrol, had  seized thousands of Jerry Cans used for smuggling,  tankers were not being impounded.

A resident of the Chikanda stated that while the security agents were hard on those using Jerry cans to smuggle fuel, they connived with “big-time smugglers” to move petrol to other countries.

YOU MAY ALSO LIKE:   COVID-19: Panic As 119 Passengers From High-risk Countries Refuse Isolation – Lagos

When contacted, the  Coordinator of the Joint Border Patrol,  Olugboyega Peters, said that the allegations were not true.

Peters said that security agents recently intercepted a petroleum tanker which was announced at a press conference in Ilorin.

He said that though there were about 100 petrol stations located in the 112 -kilometre road stretch from Ilesha Baruba to Chikanda, only 10 trucks were allocated to the area on a weekly basis.

“The way the trucks are released and monitored from the depot with records from the NNPC and the Department of Petroleum Resources and escorted by the security agencies, it is not possible for the tankers to be ferried across the borders”, Peters said

Our correspondents observed that there were no fewer than 10 checkpoints manned by customs, immigration and police along routes leading to each of Ogun State’s borders  with the Republic of Benin.

It was learnt that instead of enforcing the ban  on the sale of fuel within 20- kilometres radius of the borders, including Idiroko and Ilara, security agents  turned a blind eye to fuel smugglers.

In Ogun, security agents buy petrol in jerry cans, take it to Benin Republic to sell

A resident and youth leader  in one of the areas,  who spoke in confidence,  said, “The  fact is they (security agents) are present everywhere. It baffles us how petrol and other products are smuggled to Benin Republic.

“Our findings show that they connive with smugglers, who  move the  product out at night.

“It gets worse after the ban on the sale within   20-km radius.  Security agents buy fuel in their cars and go and sell it in Benin.  Their routes include Bebe and Igolo.”

Fuel smuggling done by residents, not our men – Customs

But the NCS  denied allegations that its officers in some northern and south-western states were assisting smugglers to transport petrol out of  the country.

The Public Relation Officer of NCS, Joseph Attah,  in a telephone interview with The PUNCH, said the alleged smuggling was not perpetrated by Customs officers, but residents who were making the allegations.

He said, “I will not say that there is no smuggling, and most of these illegal operations are assisted by residents of the communities.

“Some of the people in the communities sabotage our efforts and help smugglers to sneak in these goods.”

YOU MAY ALSO LIKE:   Kuwait Has A $700 Billion Life-After-Oil Fund, What Does Nigeria Have?

He disclosed that the service had also been efficient in enforcing the 20-km radius restriction which had brought the criticism of residents in the border communities.

“The complaint we get from those who smuggle petrol is that our enforcement of the 20km radius from the border is even affecting legitimate businesses and also the residents of some of these villages, which are at the borders, are complaining against customs for making it near impossible to get petrol for their legitimate businesses,” he added.

On its part, the Nigerian Immigration Service asked residents of border communities to identify its men who were being accused of collaborating with smugglers.

The service’s Public Relations Officer, Amos Okpu, stated this in an interview with one of  our correspondents.

He assured all that such persons would be made to pass through the NIS’ disciplinary process.

Okpu said, “The Nigeria Immigration Service’s National Border Management Strategy for 2019 to 2023 has five framework areas and one of those is to strengthen the credibility of the NIS with contiguous cross-border communities. When we deepen community contributions to manage borders in their home areas, we can run a more effective and transparent border management.

“The comptroller-general understands that community leaders, opinion leaders and even transporters are all stakeholders in the border security of our country. This is why he has been visiting these communities across the country. He has been to Adamawa and just last week, he was in Katsina, at Magama-Jibia, a border town between Nigeria and Niger republic. Why?  To seek partnership with locals to ensure border security.

“If you find  our officers indulging in any smuggling activity, identify them through their name tags and report them to us. I can assure you that the Immigration service will apprehend such an officer and pass him through the disciplinary processes, and if found guilty, he will be dismissed.”

Our troops can’t engage in such criminal activity – Army

Also, the Director of Army Public Relations, Onyema Nwachukwu, said the troops had no time for such criminal activities. He added that  economic saboteurs who could not go about their usual business were  behind the insinuations.

Onyema, in an interview with The PUNCH, said, “Troops of the Nigerian Army are on a daily basis engaged in tackling serious security challenges  across the country, ranging from terrorism,  insurgency  banditry to kidnapping, ethnic rivalry and conflicts and cattle rustling.

“Our hands are full with these operational engagements. I really wonder how anyone could imagine that our troops make out time for activities such as indulging in smuggling petroleum products across the country’s borders.

“I presume that this insinuation is only a manifestation of the saying that ‘when you fight corruption,  corruption fights back.”