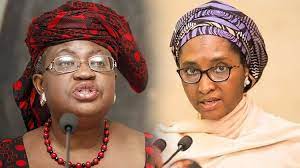 The Minister of Finance, Budget and National Planning, Zainab Ahmed, and the Director General of the World Trade Organisation, Dr Ngozi Okonjo-Iweala, on Wednesday, differed on the nation’s debt-to-Gross Domestic Product ratio.

The Publisher Nigeria learnt that while Ahmed put the debt-to-GDP ratio at 29 per cent, Okojo-Iweala said it had risen to 35 per cent.

Both the minister and the WTO boss spoke at the African Development Bank High Level Knowledge Event with the theme: ‘From Debt Resolution to Growth: The Road Ahead for Africa’ which held virtually on Wednesday.

This is in spite of voices calling on the government to halt borrowing and concentrate on other means of raising funds for the infrastructure needs of the country.

According to the Debt Management Office, Nigeria’s total public debt portfolio rose from N12.12tn in June 2015 to N33.11tn as of March 31

Ahmed said the government was enforcing fiscal discipline to expand its fiscal space so that it could continue to service its debts and borrow more to build the nation’s infrastructure capacity.

She said, “As of Q1 2021, we have about a 29 per cent debt-to-Gross Domestic Product ratio. In terms of level of debt, we are still very healthy, and sustainable.

“We are struggling with revenues, which is what we need to pay our debts. We have put in place a number of measures to enhance domestic revenue.

“We are cutting costs, we are improving the ease of doing business, trying to leverage private sector resource capacity to invest in infrastructure to reduce government spending.

YOU MAY ALSO LIKE:   Imo: APC Reacts To Attack On Governor Uzodimma's Country Home

“We are working on increased transparency in public financial management; we are enforcing fiscal discipline to expand our fiscal space so that we can continue to service our debt and borrow more to build our infrastructure capacity.”

Ahmed also said that the total debt profile did not include that of some states, and that the federal government was making moves to correct that.

“In Nigeria, we’ve been making a lot of effort on a quarterly basis to disclose all the debts that we have and to also indicate what the debt service is.

“Currently, we are working on including other state-owned debts that have not been included in public debt for the purpose of transparency. It is important and will help us going forward.”

YOU MAY ALSO LIKE:   Only Dangote, BUA, Golden Can Import Sugar, Says CBN

However, Ngozi Okonjo-Iweala, who also attended the AfDB’s event, differed with Ahmed on the nation’s debt-to-GDP ratio.

The WTO boss who had been Nigeria’s Minister of Finance in the past said the nation’s debt to GDP ratio had risen from 29 per cent to 35 per cent.

She said, “Middle-income African countries have also seen their debt burdens increase sharply. Amid falling prices and demand for oil worldwide, Nigeria’s debt to GDP ratio rose from 29 to 35 per cent; Algeria from 46 to 53 per cent, and Egypt from 84 to 90 per cent, Angola from 107 to 127 per cent.