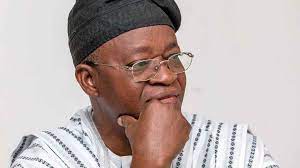 Scores of hoodlums on Thursday in Iragbiji community the hometown of Governor Adegboyega Oyetola besieged major roads with dangerous weapons to protest over a prominent herbalist who allegedly died of food poisoning.

The Nation learnt on Tuesday, the herbalist went for a naming ceremony at Iragbiji the headquarters of Boripe Local Government Area of the state and ate at the party, which resulted in stomach upset from which he later died.

Youths in the community suspected the herbalist was poisoned by those who organised the child naming ceremony.

The circumstances that surrounded the death of the herbalist angered the hoodlums in the community and led to the rampage.

The hoodlums caused mayhem by unleashing terror on Ikirun/Iragbiji/Ada road.

They barricaded the road and made bonfires. The hoodlums were armed with cutlasses, broken bottles and other dangerous weapons around the Alabi anom junction and the palace of the community.

The disrupted business activities as shop owners shut their doors.

They denied motorists access to roads as they threatened to attack any motorist flouted their directive.

The spokesperson of the Osun Police Command, Yemisi Opalola, said:”The reason why the hoodlums were burning tyres at Orita-Alabiamon to Aragbiji Palace was that police arrested one of them over the drug-related offence.

“We have deployed our men from Ikirun and Iree including the Joint Task Force team to the scene. The hoodlums have been chased away from the road and we have restored peace in the area.”