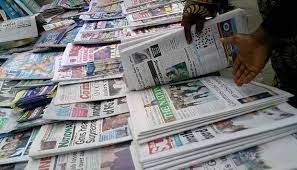 The Publisher has compiled Naija News headlines from Nigerian newspapers, this means the latest Naija news, top newspaper headlines, and happenings in Nigeria today can be accessed on this page.

1. The presidential campaign rally of the All Progressives Congress, APC, in Bauchi State was brought to an abrupt end by power outage on Monday. The rally was going on at the Abubakar Tafawa Balewa Stadium, Bauchi, when the power supply ceased and the sound system went off and could not be restored.

2. The Central Bank of Nigeria, CBN, has excluded mobile money/Point of Sales agents in Abuja and Lagos from its newly launched cash swap programme. The development came as the January 31 deadline for the phasing out of the old N1,000, N500 and N200 notes approaches.

3. The police in Imo State on Monday confirmed the beheading of the Sole Administrator of Ideato North Local Government Area of the State, Chris Ohizu.
Ohizu was kidnapped on Friday alongside two others after his country home at Imoko community, Arondizuogu, was burnt by hoodlums.

4. Presidential candidate of the Labour Party, Mr. Peter Obi, yesterday, promised to reopen Nigeria’s borders and fight insecurity if elected in the forthcoming elections. The LP presidential hopeful made the promises while speaking in Katsina, home State of President Muhammadu Buhari, on Monday.

5. The presidential candidate of the Peoples Democratic Party (PDP), Atiku Abubakar, says the All Progressives Congress government has brought down Nigeria. He, however, promised to carry every part of the country along if elected president next month.

6. President Muhammadu Buhari, Monday in Bauchi, restated that he had served Nigeria and Nigerians to the best of his ability, declaring that he had not disappointed anyone. President Buhari, who was in Bauchi in continuation of the All Progressives Congress (APC) presidential and gubernatorial campaign rallies, spoke during his courtesy call on the Emir of Bauchi, His Royal Highness (Dr) Rilwanu Suleiman Adamu.

7. The Director of Strategic Communications, PDP Presidential Campaign Council, Chief Dele Momudu has said the presidential candidate of the ruling All Progressives Congress, APC, Asiwaju Bola Ahmed Tinubu will not get enough States in North, South-West to win the presidential election. Momodu made this assertion in a statement in Abuja, on Monday.

8. The Independent National Electoral Commission (INEC) in Abia State has cautioned its staff members to shun sharp practices during the Permanent Voters’ Cards (PVCs) distribution. The INEC’s Head, Public Affairs Unit in Abia, Mr Bamidele Oyetunji, issued the warning in an interview in Aba on Monday.

9. President Muhammadu Buhari says the $1.5B Lekki Deep Sea Port is in line with his administration’s Economic Recovery Growth Plan (ERGP), adding that he is ever-ready to lend his support to game-changing infrastructure projects that can impact positively on trade and commerce in the country. He said this yesterday in Lagos after he inaugurated the Lekki Deep Sea Port.

10. An Ondo State Magistrates’ Court sitting in Akure has remanded a man, Funmilayo Asojo, in a custodial centre for allegedly killing a peacemaker, Bamiduro Adewole, with a stone. It was gathered that the victim was killed while settling a rift between the defendant and a man who owed him (Asojo) N700 on December 28, 2022.