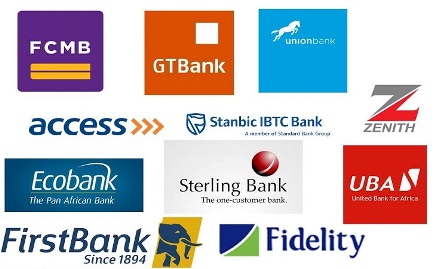 The thirteen Nigerian banks listed on the Nigeria Exchange posted N501.13 billion as profit after tax in the first six months of 2021, outpacing the N443.17 billion recorded in the corresponding period of 2021 by 13.1%.

This is according to an analysis by Nairalytics – the research arm of Nairametrics, from the review of the financial statements of the thirteen banks. The banks grew their bottom line in the period under review despite economic headwinds crippling business profits as a result of high operating costs.

Recall that some banks were forced to reduce working hours in the second quarter of the year, in a bid to manage the rising operating costs after the price of diesel hit record highs spiraling into an upsurge in the prices of most goods and services in the country.

Below is a list of the top banks with the highest profit after tax in H1 2022.

First Bank also recorded a 47.3% growth in its net interest income to N152.91 billion as well as a marginal improvement of 1.7% in its net fees and commissions income. Meanwhile, personnel expenses gulped N55.31 billion, an increase of 7.9% year-on-year, while operating expenses jumped by 32.7% to N116.78 billion.

United Bank for Africa (UBA) recorded a post-tax profit of N70.33 billion in the first half of the year, a 16.1% increase compared to N60.58 billion posted in the corresponding period of 2021. UBA accounted for 14% of the total profit aggregate by the thirteen banks.

Tax expenses on the other hand declined marginally by 1.2% to N15.42 billion in the first six months of the year.

GT Bank recorded a profit after tax of N77.58 billion between January and June 2022, representing 15% of the aggregate net profit posted by the thirteen banks. GT Bank however saw a 2.3% decline in its bottom line from N79.42 billion recorded in the corresponding period of 2021.

The decline in the company’s bottom could be attributed to increases in operating and tax expenses. In the period under review, GT Bank spent a sum of N63.57 billion on operating expenses, 17% higher than the N54.34 billion incurred in the corresponding period of 2021.

The increase in its expense line dwarfed the 15.1% growth recorded in its total revenue, while personnel expenses increased by 7.6% year-on-year to N18.54 billion. Meanwhile, tax expenses surged by 88.3% to M25.69 billion in the review period. 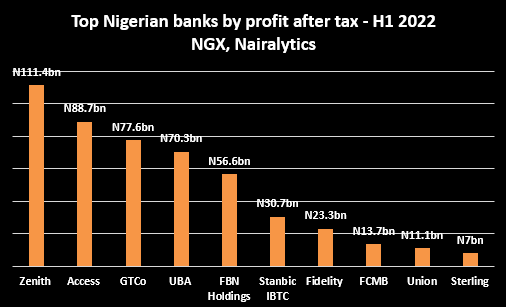 The largest bank by asset value in Nigeria is a distant second on the list with a profit after tax of N88.74 billion, which accounted for 18% of the total profit posted by the banks under consideration. The newly restructured company recorded a marginal 2.1% growth in its net profit compared to N86.94 billion recorded in the corresponding period of 2021.

It is worth noting that tax expenses declined by 14.3% to N9.05 billion in the period under review.

A look at the company’s financial statement shows a 17.1% growth in its gross earnings to N404.76 billion in the period under review. However, its operating expenses surged by 26.8% year-on-year to N123.78 billion, while personnel expenses increased by 5.7% to N39.74 billion.

Meanwhile, tax expenses gulped a sum of N18.59 billion, which is 69.9% higher than the N10.94 billion spent in the corresponding period of last year. Despite the increase in its expenses, the increase in its fees and commission line of the business and trading gains helped keep the bottom line elevated.