Home Top Stories How We Conquered Hackers From Asia – INEC 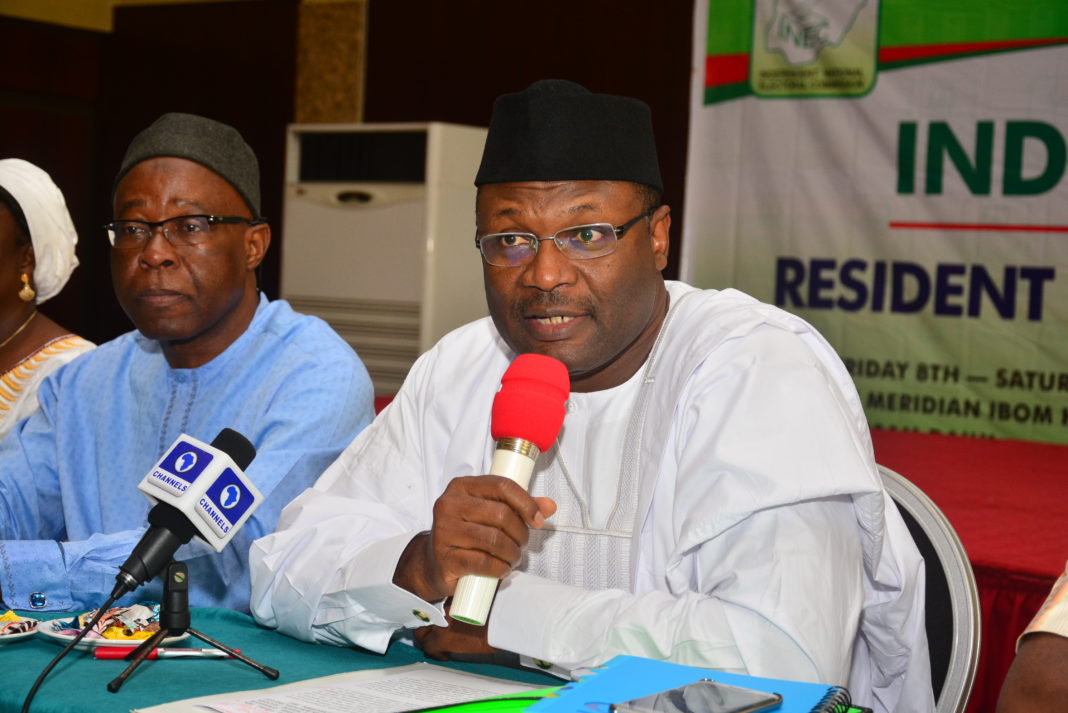 THE Independent National Electoral Commission, INEC, Friday, revealed how hackers from Asia several times launched cyber attacks on its portal during the Ekiti/Osun governorship election but were conquered.

This was disclosed by the Chairman, INEC, Prof Mahmood Yakubu, while presenting a keynote address at the official launch of Yiaga Africa Election Result Analysis Dashboard (ERAD) Report on Electronic Transmission of Results in the 2022 Ekiti and Osun Governorship Election in Abuja.

Yakubu said the hackers were on rampage and launched several cyber attacks on its portal in order to gain access and compromise authentic election results.

He said: “Now another technical concern for us was the repeated attempts to break through our cyber security system for the portal.

“Our engineers reported several cyber attacks on the portal during the Ekiti and Osun governorship elections.

“Some of them were traced to as far as Asia. So people will naturally try and hack the system so we have to be on our toes every day to make sure that we protect the portal.

“In the Anambra governorship election, we did not drop the link for the uploading of results until around 5:30pm because there are several spikes early morning, consistent attacks.

“So we had to build another dummy system to divert the attention of the hackers. But even so in Anambra by 11pm people knew the outcome of the election.

“And so far I am glad to note that all the attempts to hack our system failed. Anybody operating web portal understands that the risk of attacks so we have to be a step ahead of them.”

Meanwhile, the INEC boss said the Commission is confident of the security it has deployed for INEC Result Viewing (IReV) portal web presence, and will continue to remain vigilant and strengthening its defences.

He added that, “We have tasked our engineers to do everything possible to fully protect the IReV and our web resources.

“I must at this point say that these innovations were creation of the Commission. So we are reasonable on top of the game in order to protect our own systems I think the engineers at INEC deserve an applause.”

Meanwhile, he (Mahmood) hailed
Yiaga Africa, and a foremost television station, Channels Television over innovation and creativity in taking election results information to the bedrooms of Nigerians.

He said ERAD has boost confidence of Nigerians in INEC, especially during the Ekiti and Osun governorship elections, which Yiaga Africa and Channels Television were on ground to ensure Nigerians were abreast with the release of authentic election results from the polling stations where the votes were cast and there was no need to take anything anywhere before announcing the results of each candidate.

He said: “The Keynote Address on this occasion of the release of its report on the Election Result Analysis Dashboard (ERAD).

“This is the first of its kind in Nigeria and Yiaga Africa and Channels Television have once more confirmed that they are leading organizations in the spheres of election and public information.

“The coming together of the two in this novel project demonstrates their innovativeness, ingenuity and commitment to the public interest and social responsibility.

“Your creativity has taken what was an averagely visited web portal established by the Commission, into the living rooms of millions of Nigerians in a matter of weeks.

“The visibility that ERAD has given to the INEC Result Viewing (IReV) portal has been momentous and it is deeply appreciated by the Commission.

However, he expressed hope that the duo will sustain the Dashboard, and assured that the Commission remains ready to work with them to improve on it.

“Watching Seun Okinbaloye, Samson Itodo, Cynthia Mbamalu, Ezenwa Nwagwu, Hussaini Abdu and other presenters of the ERAD during the Ekiti and Osun Governorship elections indicated the great things that the Commission could achieve working with important stakeholders like you”, he said.

While presenting an overview of the ERAD an summary of key findings from the Ekiti and Osun governorship election results analysis, the Executive Director, Yiaga Africa, Samson Itodo, explained about factors that led to the report.

According to Itodo ERAD is an innovative technological tool designed to promote transparency of election results and counter electoral fraud.

“The second major objective was to support INEC the reach more people with real time results and in this case, polling units level results.

“The third objective was, the IReV is a public portal designed by INEC but as a civil society organization, we perform our role as vanguards of the electoral process by providing citizens oversight. And so what we did set out for ourselves was to provide an independent sort of audits and also an integrity test of this very innovative tool INEC uses for transmission of results.

“And fourthly, our goal is to continue to contribute to building public confidence in the electoral process. There are four preconditions that must be met for a successful deployment of ERAD.

“The first precondition, so there must be a commitment to electoral transparency because to deploy the ERAD which is an innovative tool, you require certain data sets and if institutions that tasked with the responsibility of either managing elections or different components of the elections are not transparent there is no way we can conduct an ERAD because the ERAD is primarily dependent on the IReV.

“But before election day, we need access to data such as the polling units data, the PVC collection data these are very important data sets that we need, and so there has to be a commitment and if there is no commitment, there is no way we can deploy the ERAD.

“The second is the legal framework that legally permits electronic transmission of results.

“The third is a coalition of the women and in this case, broad based partnerships with civil society, with media organizations with other stakeholders is necessary because once the Yiaga is organizing this events, the ERAD rests squarely on the partnerships that were able to establish with different institutions and to really recognize that Channels Television is a major partner in this endeavour and also supported by development partners like UNDP.

“And lastly, is a tech innovation tool. So it rests on technology, and an efficient, reliable and secure technology is necessary for the ERAD”, he said.

On the role played by ERAD deployment during the Ekiti and Osun State governorship elections, he said, “Part of leveraging the legality of electronically transmitting the results, INEC first deployed the IReV for the 2022 Ekiti and Osun governorship election with polling unit level results uploaded on the portal as part of INEC’s policy on electronic transmission of result.

“This also provided Yiaga Africa and Channel Television with the opportunity to support INEC by providing the public with access to analyzed election results from the polling unit in relative real-time through the launch of an Election Result Analysis Dashboard (ERAD). The Election Results Analysis Dashboard was embedded within the election-day broadcast of Channels Television. By tracking results from the polling units based on the Commission’s own published results, the ERAD operates as independent audit and integrity test assessment tool for INEC’s election results management.

“The ERAD was piloted in the governorship election in Ekiti and also used in Osun where all the results were downloaded from the iReV portal and 95% and 97% of the polling unit results were analyzed and visualized respectively.

“Millions of Nigerians across the globe followed the Channels TV broadcast as the ERAD was the only platform that provided real-time visualized data of the election results. Secondly, INEC’s IReV recorded huge traffic due to the publicity it gained from the ERAD.

“The ERAD has been acknowledged by key election stakeholders like INEC, political parties and media houses as a unique innovation for promoting the credibility of results management process.”

However, he (Itodo) said specific recommendations include INEC increasing the capacity of polling unit officials on result transmission, ballot paper accounting as well as the capturing of polling unit results using the BVAS is now very necessary.

According to him it will specifically address the capacity deficits resulting to upload of incorrect or incomplete forms and blurry images.

“Another recommendation for improving the transparency of election result management is for INEC to electronically transmit and publish the number of accredited voters on the IReV.

“This is in accordance with the Section 64(4)(5)(6) of the Electoral Act 2022. Also, the Form EC8B, which is Ward collation result sheet, should be uploaded on the IReV portal at the close of collation at the ward level.

“It will facilitate monitoring and tracking of the results collation process.

“Importantly, we also believe that it is important for INEC to conduct stress test/mock exercises to assess the robustness, efficiency, security and capacity of its servers and devices to be deployed for the 2023 general election.

“This will serve to inspire public confidence in the IReV and BVAS.In conclusion, the introduction of the IReV into the framework for election results management has transformed public perception of the accuracy and credibility of election results. It has boosted the transparency of elections by ensuring voters have access to polling unit results at the close of polls.

“It is an undisputed fact that granting public access to polling unit level results in near real-time is gradually sanitizing the results collation process.

“Uploading results on the portal deter collation officers and politicians from altering or mutilating election results at different collation levels.

“This oversight mechanism introduced by INEC and legalized by the Electoral Act 2022 is one of the most significant innovations and reform to Nigeria’s electoral process.

“Therefore, improving the efficiency of the IReV to sustain public confidence in the results management process is critical for the successful conduct of the 2023 elections.

“This can be achieved by addressing the gaps and shortcomings identified by the ERAD which will guarantee the credibility and legitimacy of the results of future elections”, he added.