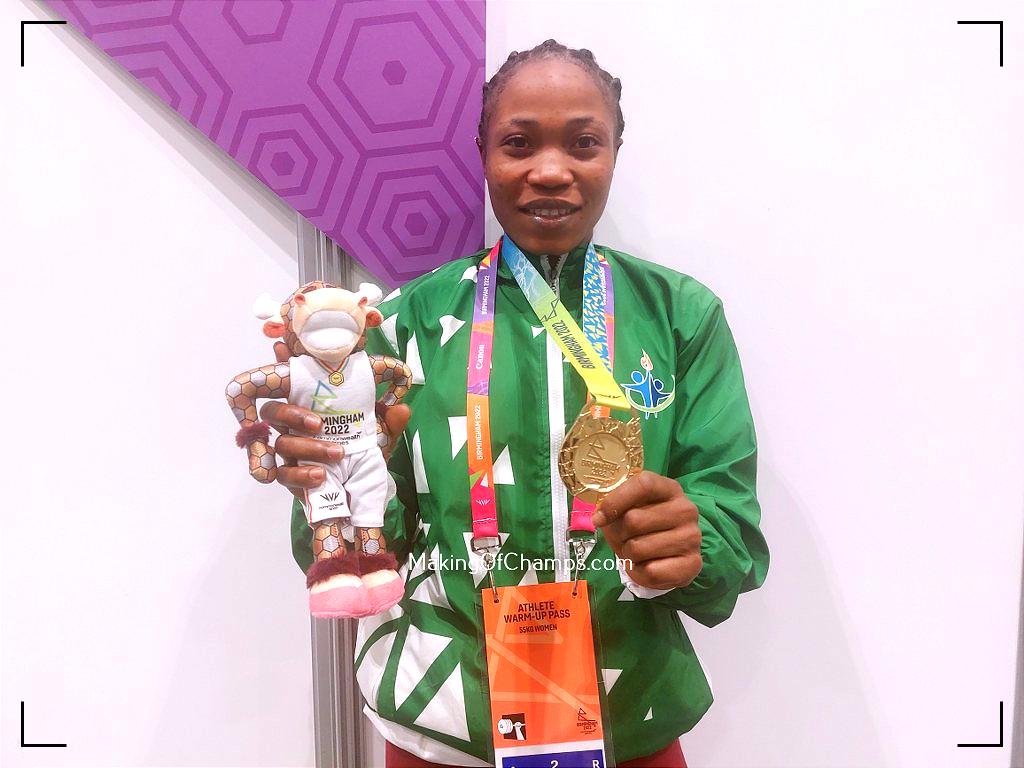 Nigerian weightlifter Adijat Olarinoye on Saturday night won the country’s first gold medal at the ongoing 2022 Commonwealth Games in Birmingham, in the women’s 55kg event, setting a new Games record in the process, on her debut,

It’s also Nigeria’s first medal at the Games, which began on Thursday.

With the gold, Nigeria is placed ninth on the medals table, which has Australia in first place with 13 gold, eight silver and 11 bronze medals.

Meanwhile, it was a mixed outing for Team Nigeria at the ongoing 2022 Commonwealth Games in Birmingham on Saturday on Day 2 of the event, The PUNCH reports.

Team Nigeria was in action in two events – boxing and table tennis – as the athletes recorded both wins and losses.

In the boxing event, Azeez Osoba, knocked out his opponent, Carl Hield, from the Bahamas in the round of 32 bout of their 71kg (light-middleweight) division.

It took the Lagos-born pugilist two minutes and 54 seconds to send Hield to the canvas at the NEC Hall 4.

It was another mixed result in table tennis as the men’s team, led by world No.11 Quadri Aruna, cruised into the quarter-finals after a convincing 3-0 win over Cyprus in the Men’s Group 2.

Omotayo, the African Games champion, then asserted his superiority over Savva with a 3-0 demolition to complete the victory over the Cypriots.

However, it wasn’t a good turnout for the women as they all crashed out of the Team Event.

Offiong Edem and Fatimo Bello defeated England duo Maria Tsaptsinos and Tin-Tin Ho 3-1 and 3-2 respectively in the Women’s Group 1, but it was not enough to see the ladies through, as they (Bello and Edem) lost 3-0 in the doubles, while Ajoke Ojomu lost her two singles games 3-0 to Ho and 3-2 to Charlotte Bardsley respectively.

The women’s team finished in third place in Group 1 with one point from three games.

On Day 3 of the Games, Team Nigeria will compete in four events.

Nigeria stands a chance of winning a medal in the over 71-75kg of the boxing event, with Adeyinka Benson set to face Ghana’s Abubakari Quartey in the round of 16.

Completing the action for the day, Rafiatu Lawal will be competing in the women’s 59kg weightlifting at NEC Hall 1.