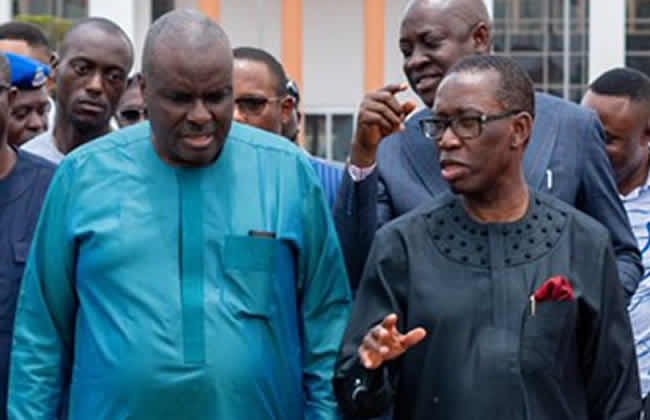 Examine the battle of supremacy between the incumbent Governor of Delta State, Ifeanyi Okowa, and a former governor of the state, James Ibori, over the Peoples Democratic Party’s governorship ticket

There are fears among the Peoples Democratic Party members in Delta State that the name of the party’s governorship candidate may not be on the Independent National Electoral Commission’s list come 2023 general elections following the cold war between two leaders of the party in the state, Governor Ifeanyi Okowa and one of his predecessors, James Ibori.

The battle deepened on Friday, July 22, 2022, when INEC published the particulars of the candidates nominated by political parties for the 2023 governorship and state Assembly elections in all the constituencies nationwide.

Surprisingly, the details of Sheriff Oborevwori, who won the party governorship primary and had his name submitted to the INEC, were not among those published by the electoral umpire as eligible to contest the governorship election in 2023.

The PDP members are worried that the party may not participate in the 2023 governorship election in the state.

The state’s INEC Resident Electoral Commissioner, Mr Monday Udoh-Tom, confirmed that the PDP in Delta had yet to have a candidate for next year’s governorship election, adding that there were no details of any candidate for the party.

He stated, “We have no particulars of any candidate for the PDP as far as the governorship election is concerned because they (PDP members) are in court. When the matter is determined, we will have the particulars of one of them.

“You will recall that there was a court judgment that disqualified one of them, and he filed for a stay of execution and also appealed the judgment.

“As a result, we cannot act on the case of the PDP for now until the Appeal Court delivers judgment,” Udoh-Tom said.

The current Speaker of the state House of Assembly, Oborevwori, won the PDP governorship primary on May 25 but his closest rival and former Chief of Staff to Okowa, David Edevbie, approached an Abuja High Court seeking Oborevwori’s disqualification on grounds of discrepancies in the certificates he presented.

The High Court subsequently granted Edevbie’s prayers by disqualifying Oborevwori and declaring the plaintiff as the party’s candidate.

Although Oborevwori filed an appeal against the judgment, Edevbie’s supporters have been jubilant, claiming that INEC recognised their principal as a candidate by issuing him form E13B.

Edevbie was the commissioner for Finance in Okowa’s first tenure, Chief of Staff in his second tenure, and now Ibori’s anointed candidate.

Although he was in the United Kingdom serving a prison term, Ibori could be said to be instrumental in the election of Okowa as the state governor in 2015.

The PDP in Delta State last Saturday held its mega rally in Ozoro in the Isoko North Local Government Area of the state to unveil its governorship candidate and receive defectors from the opposition political parties but got disappointed on Friday as its candidate’s name was missing from the list.

But prominent party leaders boycotted the rally even as there was no official unveiling of the Delta PDP governorship candidate as expected.

Among those absent from the rally were Ibori; a former Governor of the state, Dr Emmanuel Uduaghan; Senator James Manager, representing Delta South; and the state Deputy Governor, Kingsley Otuaro.

Dignitaries at the mega rally included the Minority Leader, House of Representatives, Ndudi Elumelu; Oborevwori; and House of Assembly aspirants; party leaders; and political appointees across the three senatorial districts.

Addressing the party members, the vice presidential candidate of the party, Okowa, said the victory of the PDP in the just concluded Osun State governorship election was to make a statement to rescue Nigeria.

Okowa, who received the defectors from the All Progressives Congress and All Progressive Grand Alliance, boasted that a similar victory would happen in the state where the party would win the governorship, national and state assembly seats, and others.

Okowa, who was miffed by recent remarks that the party in the state was dying, said, “I heard some people saying the PDP is dying in Delta State. Why are they deceiving themselves?” People will come out to vote for the PDP in all the local government areas in the state.

“Whatever is going on in the party today is a normal democratic process; so, there is nothing to worry about, no cause for alarm, and no cause to fear.”

Related News
Delta 2023: We have governorship candidate, PDP insists
Delta gov: PDP group decries imposition of candidate
Don’t impose gov candidate, Delta groups urge PDP
“We are not boasting but on the day of the election, our people will come out and vote, and in the next election, we are going to win all available seats-from the Assembly to the Presidency.

“It is about Nigeria, youths, women. We cannot continue to suffer. Enough is enough. Those who have just joined us are members of the party, with no discrimination. “In September, the campaign will start. You will hear us loud and clear,” Okowa assured.

“2023 is about youths and women of Nigeria and we cannot continue to suffer and stay hungry. We must definitely move forward, “he stated.

The state Chairman of the party, Mr Kingsley Esiso, urged party faithful to remain calm, adding that INEC had asked stakeholders to be calm until court processes were exhausted.

He stated, “As the state chairman of this great party, it is my responsibility to educate our people on the developments in the party.

“Some weeks ago, our party conducted one of the freest and fairest governorship primaries in Delta State, and a candidate emerged, and our party has dutifully submitted the name of that candidate.

“It is our responsibility to stand and defend the outcome of that primary. The issue before the court has nothing to do with the integrity and credibility of that primary.

“By the action of INEC on Friday, we have been told in the PDP to wait patiently for the outcome of the court judgment,” he stated.

Meanwhile, the Director of Operations of the David Edevbie Campaign Organisation, Mr. Julius Akpovoka, blamed the party for taking sides in the suit challenging the eligibility of Oborevwori.

Akpovoka, who said this during a chat with journalists in Asaba last week, said Edevbie was very happy when he came out second at the primary.

He said, “It is a case of a second to be the first. We are happy that Edevbie came out second after the primary because we know that Edevbie’s name must be on the ballot list. I am the principal agent for Edevbie. The primary was transparent. We know that the second position is close to the first position based on the facts of the case.

“All of us are members of the PDP, so Edevbie is now the candidate of the party. This is what everyone should embrace. In no time, our principal will embark on reconciliation to bring everybody together.

“ Oborevwori’s case is not new. It is also clear that there are discrepancies in his certificates. We are not shocked by the judgment of the high court.”

“I don’t see the Supreme Court dismissing the judgment of the High Court because the matter was very clear. It is a case of age and discrepancies in certificates. The party should do its best if it wants to win the election. In football, you cannot leave your best player on the bench and play second best. You will lose the game. That’s what we are facing.”

With the raging war, there are speculations that Okowa may be considering adopting a plan B in the event of Oborevwori’s failure at the Appeal Court.

The speculations are coming against the backdrop of rumours that Okowa’s immediate past Chief of Staff, Mr. Festus Agas, had reportedly picked up the governorship form to contest under the Accord party.

A social analyst and human rights activist, Mr. Victor Ojei, in an interview with The PUNCH, said with the look of things, the PDP may not have a candidate in the 2023 general election.

He said, “The reason why the PDP candidate was not on the list was possibly INEC received letter from Edevbie notifying them about the court judgement.As I speak to you now, the judges are on vacation, which most likely to end in the second week of September.”

Another political analyst, Mr. Peter Ejiro, described the development in the PDP as supremacy battle between the two leaders of the party in the state.

“My brother, what you see now playing out in the PDP is a battle of supremacy. Don’t forget that recently a Commissioner in the state said that Ibori is not Okowa’s godfather.”