Since the introduction of the Central bank of Nigeria’s (CBN) “Naira4Dollar Scheme” in March 2021, the Naira rate has fallen by a whopping N127 (or 26%)

Naira4Dollar: The CBN launched the “Naira 4 Dollar Scheme” on March 8, 2021, to incentivize the inflow of remittances from the diaspora into the country, in response to the inadequate forex supply and ongoing pressure on the country’s exchange rate.

The key requirement for this Naira4Dollar program to function was that remittances from the diaspora had to be sent via an authorized international money transfer operator (IMTO).

Just in case anyone was interested in how this initiative was faring, the CBN released an update in February 2022, stating that diaspora remittances surged to $100 million weekly from $6 million (i.e. a 1,667% surge).

Why does this matter?

From the Central Bank of Nigeria’s perspective, the Naira4Dollar initiative has successfully provided an opportunity to encourage alternative FX inflows from non-oil sources.

However, from the perspective of an average Nigerian, it may be unclear how to acknowledge that this initiative has been successful. This is because the challenges of accessing foreign exchange persist.

Specifically, anecdotal data suggests that businesses continue to experience latency in getting backlogs of FX orders fulfilled. These anecdotal experiences can arguably be evidenced by notifications from key operators such as

So why is the scheme failing?

When the Naira4Dollar scheme was introduced in March 2021 (i.e. fifteen months ago), the CBN had suggested that a huge portion of the diaspora remittances would be incentivized to use the Naira4Dollar initiative rather than going through non-official channels.

One can argue that in the early days of the Naira4Dollar initiative, some stability in the exchange rate was observed (see below chart). 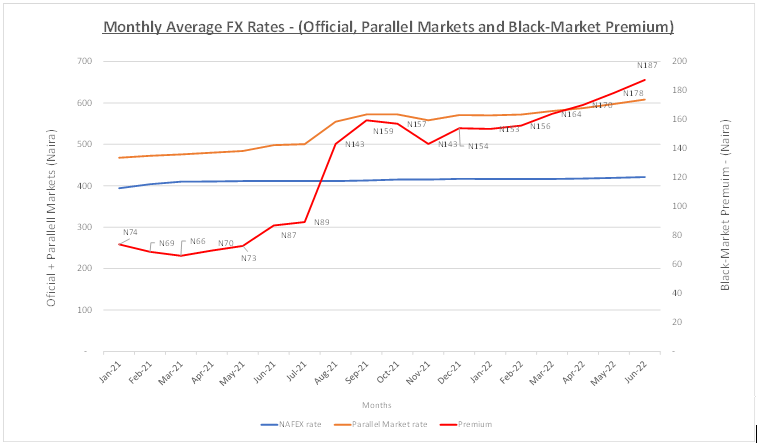 This widening spread between official and parallel market rates can potentially be attributed to several factors.

From a demand uptick perspective a few notable changes occurred;

Firstly, observers of economic activity will recall that Nigeria eased a significant portion of its restrictions in the second quarter of 2021, as vaccines began to arrive in the country. Consequently, by the third quarter of 2021, demand for domestic and international travel had begun to rebound.

The impact of increased economic activity simply meant that by the third quarter of 2021, business demand for FX had simply bounced back, thus the relative stability in parallel market spread achieved by the Naira4Dollar scheme earlier in the year was simply not sustainable.

Secondly, in the first quarter of 2022, the Russia-Ukraine war commenced causing higher energy prices. This event and the consequent impact on energy and wheat prices added more pressure on our import bill.

Consequently, it is not a surprise that as business demands for imports rebounded and FX demand got routed to the less bureaucratic parallel market, whatever incentive Naira4Dollar offered to diaspora remittance simply paled in comparison to the margins available in the black market.

Thus, as with basic economics principles, mismatches between demand and supply will always be reflected in price increases.

So, does this mean that the Naira4Dollar initiative has failed completely?

The reality is that observers must acknowledge that the Naira4Dollar scheme is an attempt at establishing an FX marketplace in Nigeria, albeit under the supervision of a dominant participant the CBN.

However, at this stage, it doesn’t appear that the volumes being generated by this initiative are sufficient to match demand upticks.

Furthermore, inefficiencies such as business concerns about bureaucratic processes and price control may need to be addressed transparently.

One interesting thing to note is that the price control concerns at the IEFX window may have begun to abate in recent weeks.

More actions by the CBN will be welcomed to further incentivize supply. Especially as the apex bank seeks to reduce the premium between its official rates and the parallel market.