Human rights lawyer, Festus Ogun, on Saturday described as “illegal and unconstitutional” the decision of the ruling All Progressives Congress (APC) to list Senate President, Ahmad Lawan, as the party’s candidate for Yobe north.

The resolution to list Lawan as the candidate for the APC for Yobe north senatorial district for the 2023 elections comes hours after Bashir Machina, who won the APC primary for the district, insisted that he would not step down for the senate president.

Lawan had contested the APC presidential ticket, where he lost to Bola Tinubu. He came fourth.

Machina, the senatorial candidate for Yobe North, says he is seeking redress after the APC substituted his name on the list of candidates sent to the Independent National Electoral Commission (INEC).

Machina, who hoped that the substitution was an error, maintained that he is still the candidate for Yobe North senatorial district under the APC. 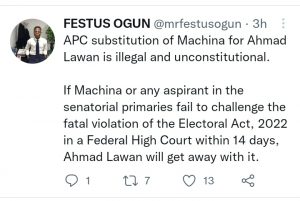 “If Machina or any aspirant in the senatorial primaries fail to challenge the fatal violation of the Electoral Act, 2022 in a Federal High Court within 14 days, Ahmad Lawan will get away with it.”