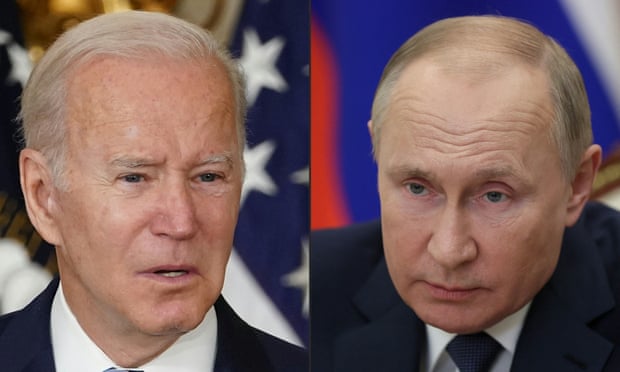 Joe Biden said the US and its allies were prepared to respond “in kind” if Russia uses chemical weapons during its invasion of Ukraine as he urged the west to sustain pressure on Vladimir Putin and remain unified in its response to the war.

“It would trigger a response in kind,” the US president said at a press conference when asked whether the use of chemical weapons would prompt a military response from NATO, adding that the alliance would decide how to react “at the time”.

Biden was speaking after he met leaders of NATO members to debate the appropriate response to the possible use of weapons of mass destruction by Russia, as well as military aid for Ukraine and tighter sanctions on Moscow.

The NATO summit, called by the US president at short notice, was Biden’s first stop on a multi-day trip to Europe intended to fortify opposition to Putin’s war on Ukraine as the increasingly brutal invasion is set to enter its fifth week.

“The single most important thing is for us to stay united,” Biden said after the summit, warning Putin would be emboldened if he believed the west would “crack in a month, six weeks, or two months”. He added: “They can take anything for another month.”

He added the “maintenance of sanctions” and “increasing the pain” on Russia would demonstrate to Moscow that the west is determined to “sustain what we’re doing”.

The US president also said he would support Russia’s expulsion from the G20 but said “that depends on” the other members of the intergovernmental forum. “If Indonesia and others do not agree, then we should in my view ask for Ukraine be able to attend the meetings.”

The Brussels summit comes as Biden is trying to drum up support for a united US-Europe front against China should Beijing decide to provide assistance for Russia’s invasion.

Biden said he had used a telephone call last week with Xi Jinping, his Chinese counterpart, to warn there would be “consequences” if Beijing were to help Russia. US officials believe that Moscow has asked Beijing for military equipment to support its invasion of Ukraine.

“I pointed out the number of American and foreign corporations that left Russia as a consequence of their barbaric behaviour . . . China understands that its economic future is much more tied to the west than it is to Russia.”

Although Russia’s military has suffered setbacks and failed to gain control of major Ukrainian cities including Kyiv, the capital, it has launched a series of increasingly brutal attacks on civilians and targeted key infrastructure.

Biden’s trip to Brussels is his third to Europe since taking office at the White House last year. He is scheduled on Friday to travel to Poland, where the US has deployed thousands of additional troops in recent months to support the eastern flank of the Nato alliance that is most exposed to the Russian threat.