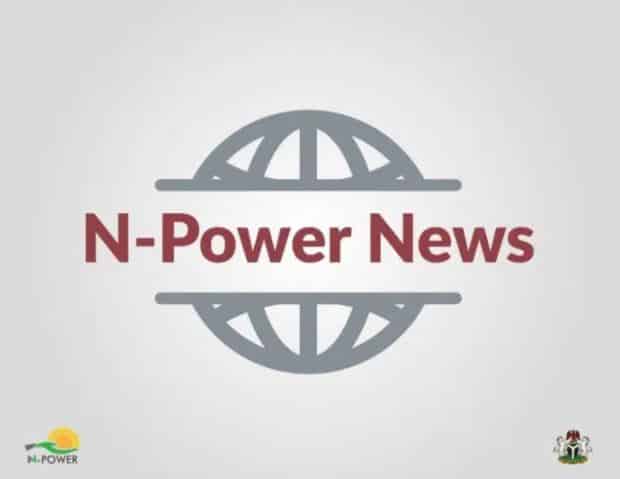 Latest NPower News On Stipends Payment For Today Wednesday 26th January 2022 can be accessed below.

NewsOnline reports that beneficiaries of the Federal Government’s N-Power scheme have started receiving bank alerts of N30, 000 for their November 2021 stipend.

Some volunteers (Batch C) who spoke to NewsOnline Nigeria on condition of anonymity confirmed the development on Tuesday morning.

NewsOnline reports that following the approval of November and December Stipend Payment to the Batch C Stream 1 Npower beneficiaries by FG through the Minister for Humanitarian Affairs, Disaster Management and Social Development, Sadiya Umar Farouk, the National Social Investment Management System (NASIMS) has initiated payment for the month of November 2021.

Many beneficiaries of the Batch C Stream 1 Npower Programme have seen the November Payment marked as “Pending” on their NASIMS Profiles on 20th, Jan. 2022….Read MOre

According to Nasims, while the November payment process has been initiated and crediting of accounts begins shortly, kindly note that all outstanding September and October stipends will de nitely be cleared. We appreciate your patience so far…..READ MORE

In today’s latest Npower news – We will be talking about Four Untrue Talk About Npower To Avoid Today. So let’s get straight to the point.

The information circulating about Npower batch D recruitment is not true! If you see any information stating that Npower is recruiting for batch D, note that it does not emanate from N-Power. Npower doesn’t sell forms to bene ciaries and trainees in the programme….Read More…

NPower News: Sadiya Umar Farouq Bags Most Trusted Woman In Public Office Award
NewsOnline reports that the International Human Rights Commission IHRC has decorated the Minister of Human Affairs, Disaster Management and Social Development Sadiya Umar Farouq with the award of the ‘Most Trusted Woman in Public Office. The Minister was bestowed with the award on Thursday in her office in Abuja….Read More

Declaring the training session open, the Minister of Humanitarian Affairs, Disaster Management and Social Development Sadiya Umar Farougq said that the N-Skills programme targets marginalized and disadvantaged populations, including those with primary or no-formal education….Read More..

As you all know, Npower is not a permanent job it is an empowerment programme initiated by the federal government to equip the Youths with skills and work experience needed to be employable or become entrepreneurs/business owners….READ MORE..

This new development occurred today as some of the Beneficiaries took to some of their discussion group to share the news.

Recall that a few days ago, the Minister of Humanitarian Affairs, Disaster Management and Social Development, Sadiya Umar-Farouq, stated that the Federal Government will soon enlist additional 400,000 youths under the N-power programme…..Read More…

According to the notification, all sorts of issues will be identified and rectified and Npower beneficiaries in Gombe State are to come along with all the below Requirements:…..Continue Reading…

Recall that a few days ago, Nasims stated that in its quest to ensure Beneficiaries are paid at once, they adopted the Bulk payment approach which was partially successful resulting in some accounts getting credited and some not, due to network instability. As a result, October payments were paused to get the challenge sorted out…..Read More

This online newspaper understands that NASIMS kicked off the payment of October to all Beneficiaries after a temporal pause…..Read More…

According to Nasims, In their quest to ensure Beneficiaries are paid at once, they adopted Bulk payment approach which was PARTIALLY SUCCESSFUL resulting to some accounts getting credited and some not, due to network instability….Read More…

NewsOnline reports that the management of Npower via its Facebook page announced that they have initiated the Npower Batch C1 Beneficiaries, outstanding payment process.
You may want to also check Apply For Federal Government Scholarship Awards (BEA) 2022-2023…Read More

NewsOnline reports that the Lagos Npower page on Facebook shared an update that Atiku Talk On Npower Cancelation, and FG talk about Spending N30b Monthly on beneficiaries stipends. Read details below.

This online news platform understands that this is the second payment Npower management will be making deserving beneficiaries after it paid for the September stipend in November 2021….Read More…

Npower 2 Months 60k Stipends Payment News
NewsOnline understands that the news circulating by some individuals on social media stating that Npower has begun payment of 2 Month 60k Stipends out of the 3 months October, November, and December allowance owed beneficiaries.

The rumors begin circulating earlier on Friday 24th of December 2021 by some few persons. Nevertheless, some beneficiaries took the rumors as a great relief because they thought they will be paid to celebrate Christmas, but the payment never showed….Read More..

NewsOnline reports that the Minister of Humanitarian Affairs, Disaster Management and Social Development, Sadiya Umar-Farouq on Wednesday said the Federal Government will soon enlist additional 400,000 youths under the N-power program.

Umar-Farouq said the youths will be enlisted under Batch C2 for the program which is aimed at equipping the youths with life-long skills…..Read More…

NPower News: FG Spends Over N360bn Yearly On Empowerment Of Graduates, Non-Graduates
NewsOnline reports that the Federal Government, on Wednesday, reiterated its resolve towards adequate funding of various schemes under the National Social Investment Programmes (NSIPs), including N-Power programmes aimed at reducing poverty and unemployment rate across the country.

The Minister of Humanitarian Affairs, Disaster Management and Social Development, Sadiya Umar Farouq, gave the assurance in Abuja while delivering a farewell message at the end of the 6 weeks N-Knowledge training component of the N-Power Programme for Batch C1, held across the 6 geopolitical zones of the country…..Read More..

NewsOnline reports that the management of Npower Programme Nasims has given a new update regarding Payment Of Last Allowance To Non-graduate Npower Trainees.

According to Nasims, this is to bring to your notice that the last allowance for Power none graduate trainees currently undergoing training at different centres has been disbursed. While some accounts have been credited, be rest assured all qualified trainees will be paid.
As the training will gradually be rolling out, we wish you well in all your endeavours and implore you to make judicious use of the acquired skills, Nasims said…..Read More…

Visit THE PUBLISHER NIGERIA for more latest news updates on N-power and other top trending stories/news in Nigeria and around the world.