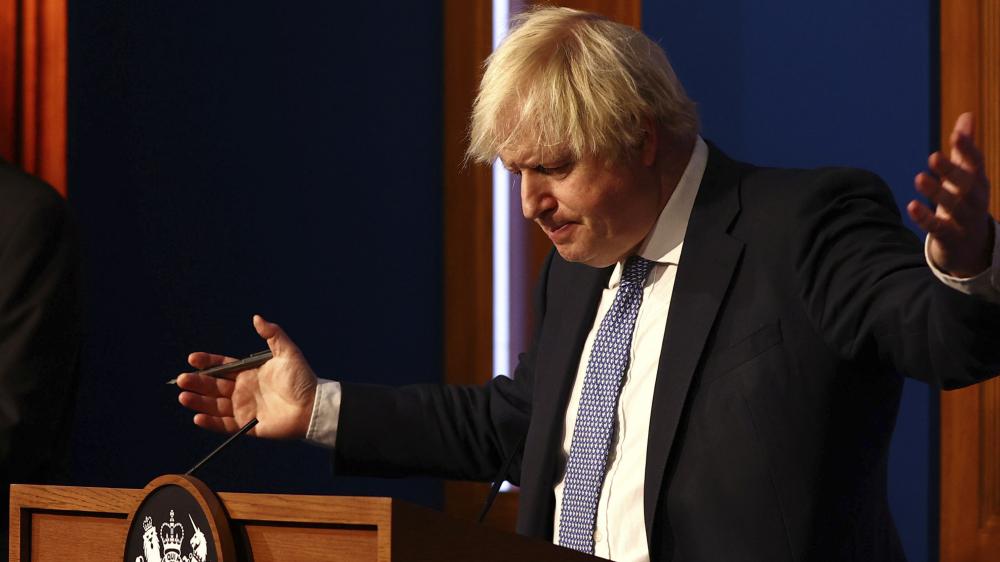 US president Joe Biden has insisted there was “total” unity among western powers after crisis talks with European leaders on how to deter Russia from an attack against Ukraine, as Downing Street warned of “unprecedented sanctions” against Moscow should an invasion take place. .

“I had a very, very, very good meeting – total unanimity

with all the European leaders,” Biden told reporters shortly after finishing a one hour and 20 minute video conference on Monday with allied leaders from Europe and Nato.

The US has put 8,500 troops on high alert to deploy to Europe as Nato reinforced its eastern borders amid growing tensions over Ukraine.

In London, prime minister Boris Johnson’s office also said “the leaders agreed on the importance of international unity in the face of growing Russian hostility.”

Downing Street said the group stressed that diplomatic discussions with Russia remain the first priority, but said the nation would be hit with “swift retributive responses” if a “further Russian incursion into Ukraine” takes place.

“The leaders agreed that, should a further Russian incursion into Ukraine happen, allies must enact swift retributive responses including an unprecedented package of sanctions,” Downing Street said following the discussions lasting over an hour.

Washington is trying to maintain transatlantic and Nato unity against Russia, which supplies about 40% of the European Union’s natural gas.

The meeting came days after Biden revealed behind-the-scenes divisions among the Nato allies on how severe the response would be and as Germany faces criticism from Kyiv over its refusal to send defensive weapons to Ukraine.

Under efforts to deter Russian “aggression”, Biden said the leaders discussed preparations to “impose severe economic costs” against Moscow while seeking to “reinforce security on the eastern flank”.

German Chancellor Olaf Scholz said “it is up to Russia to undertake visible de-escalation,” while Nato secretary general Jens Stoltenberg warned of “severe costs” if there is “any further aggression” by Moscow against Ukraine.

Also on the call were the leaders of France, Italy, Poland and the European Union.

The French government has announced that Russian and Ukrainian officials would meet, along with French and German counterparts, in Paris on Wednesday to try to find a way out of the impasse.

Despite insisting he has no intention of attacking, president Vladimir Putin has deployed more than 100,000 troops close to Ukraine, where Russia already seized Crimea in 2014 and backs a separatist army in the east.

Moscow is demanding a guarantee that Ukraine, a former Soviet republic, never be allowed to join Nato, as well as other concessions by the United States in return for a decrease in tension.

The United States and Nato have rejected the Russian demands and told Putin to withdraw from Ukraine’s borders, warning that a Russian attack will trigger damaging economic sanctions, as well as a beefed-up Nato presence in eastern Europe.

On Monday the US placed 8,500 troops on heightened alert to deploy to Europe as Nato reinforced its eastern borders with warships and fighter jets, amid growing fears of a possible “lightning” attack by Russia to seize the Ukrainian capital, Kyiv.

Pentagon spokesperson John Kirby said the troops, all of them currently stationed in the US, would be on standby to take part in Nato’s Response Force (NRF) if it is activated, but would also be available “if other situations develop”.

The alert order issued by the defence secretary, Lloyd Austin, reduces the number of days it would take to deploy but it is not itself an order to deploy.

The USS Harry S Truman aircraft carrier, along with its strike group and air wing, joined patrolling activities across the Mediterranean Sea on Monday, the first time since the cold war that a full US carrier group has come under Nato command.

Kirby said: “In the event of Nato’s activation of the NRF or a deteriorating security environment, the United States would be in a position to rapidly deploy additional brigade combat teams, logistics, medical, aviation, intelligence, surveillance and reconnaissance, transportation and additional capabilities into Europe.”

Any deployment in Europe, he said, “is really about reassuring the eastern flank of Nato” of the US readiness to come to the defence of alliance members. The force would not be deployed in Ukraine, which is not a Nato member. There are currently about 150 US military advisers in the country, and Kirby said there were no plans at present to withdraw them.

Jen Psaki, the White House spokesperson, said the US had “a sacred obligation to support the security of our eastern flank countries”.

“We are talking to them about what their needs are and what security concerns they have. So I wouldn’t say it’s a response to an abrupt moment. It’s a part of an ongoing contingency planning process and discussion,” Psaki said.

The Kremlin pointed to the new deployments as evidence of Nato aggressive posturing, blaming Nato for the rise in tensions. Its spokesperson Dmitry Peskov said: “We see statements by the North Atlantic Alliance about reinforcement, pulling forces and resources to the eastern flank. All this leads to the fact that tensions are growing. This is not happening because of what we, Russia, are doing. This is all happening because of what Nato and the US are doing and due to the information they are spreading.”

In recent months Russia has massed more than 100,000 troops along Ukraine’s border and it is planning extensive military exercises in neighbouring Belarus and in the Mediterranean.

The Belarusian leader, Alexander Lukashenko, said on Monday he would deploy a “whole contingent of the army” to the border with Ukraine, alleging: “Ukrainians have begun to gather troops [there]. I don’t understand why.”

Russia continued preparations for sweeping naval exercises on Monday as the Baltic fleet announced that two corvettes had set sail to join in the military drills. The Kremlin has also dispatched six amphibious landing ships to the Mediterranean as part of the exercises, which will include 140 ships and more than 10,000 Russian troops.

Washington is trying to maintain transatlantic unity to build a credible threat of sanctions as a deterrence against Moscow.

However, members of the 27-nation European Union have starkly differing approaches and ties to Russia.

The new government in EU economic powerhouse Germany in particular has faced anger from Kyiv over its refusal to send weapons to Ukraine, as well as hesitating over one of the harshest economic sanctions under discussion – cutting Moscow from the global SWIFT payments system.

Echoing other US warnings, Kirby said on Monday that intelligence shows “it’s very clear that the Russians have no intention right now of de-escalating.” However, some European leaders are signalling less alarm.

EU foreign policy chief Josep Borrell said after talks with US top diplomat Antony Blinken that there was nothing to suggest an “immediate” Russian attack.

“You have to stay calm doing what you have to do, and avoid a nervous breakdown,” he said.

On Sunday and Monday the White House and Downing Street said they had started withdrawing diplomats’ families from Ukraine.

The Ukrainian government has criticised the withdrawals as “premature”. Ukrainian security experts said that Russia has not yet made the preparations necessary for a large-scale invasion, such as the deployment of combat units and establishment of medical facilities.

Oleksiy Danilov, the secretary of the national security and defence council, said he did not expect an imminent invasion and did not share the “panic” which he connected to “geopolitical and domestic” processes in the west.

“The buildup of Russian troops isn’t as rapid as some claim,” Danilov told the BBC’s Ukrainian service.