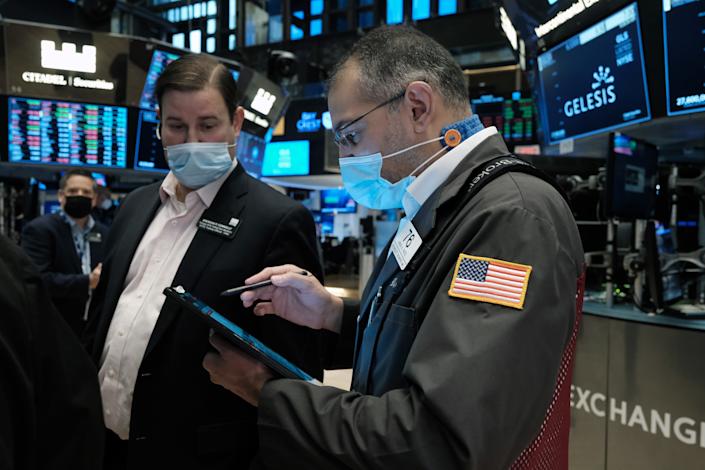 Contracts on the S&P 500 Dow and Nasdaq gained. This steadying in tech shares came after the Nasdaq Composite dropped 2.6% earlier to fall to its lowest level since October. The index also came within striking distance of a correction, typically defined as a closing level at least 10% below a recent record high. Goldman Sachs (GS) shares drifted higher in late trading after closing lower by 7%, following a disappointing quarterly report showing a slowdown in its equity trading business and jump in compensation costs. Big banks including Bank of America (BAC) and Morgan Stanley (MS) are set to report results Wednesday morning.

Treasury yields spiked, and the benchmark 10-year yield neared 1.9% for its highest level since January 2020. Commodity prices also gained during the session, and U.S. West Texas intermediate crude oil futures settled higher by nearly 2% to top $85, in the highest settlement since Oct. 2014.

According to many strategists, the volatility across risk assets largely reflects investors’ ongoing reassessment of highly valued asset prices, with interest rate hikes and an attenuation of liquidity out of the Federal Reserve looming.

Though Fed officials are in a blackout period before their next meeting next week, policymakers over the past several weeks have telegraphed that they are gearing up to raise interest rates and eventually draw down the nearly $9 trillion on the Fed’s balance sheet as the economic recovery continues and inflation soars.

“At this point, it’s very clear that the first rate hike will be at the March meeting,” Jason Ware, Albion Financial Group partner and chief investment officer, told Yahoo Finance Live on Tuesday. “What we’re going to be looking at is the language around inflation because at the end of the day, inflation is what’s driving Fed policy.”

Other strategists offered a similar take.

“I think it’s definitely a repositioning of the market to deal with really what the Fed has done. And the Fed has basically created some certainty around the fact that there will be rate rises,” David Bailing, Citi Global Wealth chief investment officer and head of global wealth investments, told Yahoo Finance Live on Tuesday. “Then the question is, how much do they actually release from their portfolio? And it’s that that creates the enormous uncertainty.

“What we’re seeing now is a broad-based reevaluation of the highest growth shares, which obviously are the most sensitive to interest rates. But what’s happened is it’s taking place across the board,” he added. “This is going to present a buying opportunity in areas like fin tech, in areas like cybersecurity, where you have very steady growth, you have increased cash flows and potentially profitability, as opposed to the more speculative shares.”