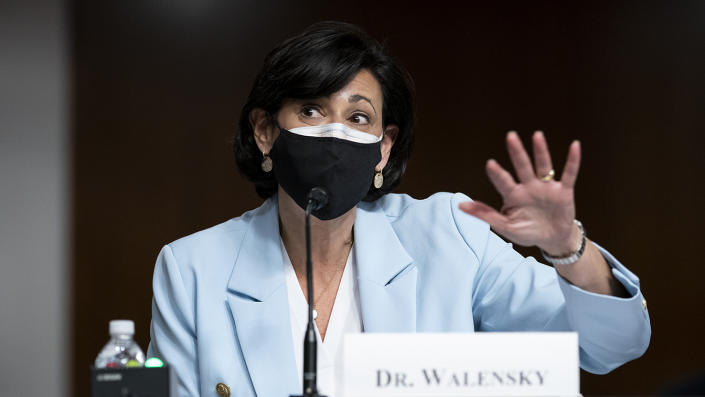 Dr. Rochelle Walensky, director of the Centers for Disease Control and Prevention, used an appearance before a Senate committee on Tuesday to counter misinformation about coronavirus deaths. The falsehood has been spreading since an interview she gave last Friday in which she appeared to say — but, in fact, didn’t — that most people who died of COVID-19 had other serious health conditions, or comorbidities.

“It was a pretaped interview, and much of it was cut. And that phrase was taken out of context,” Walensky said during Tuesday’s hearing. By that time it had become clear that improper editing, not any misstatement on her part, had caused the misconception, which was amplified by some conservatives on social media.

The misinformation came from an interview Walensky gave last Friday to “Good Morning America.” The clip, edited for brevity, made it appear that 75 percent of all people who died from the coronavirus had multiple other comorbidities, which would make it appear that COVID-19 is not nearly as severe as statistics might indicate. But Walensky was actually talking about a handful of deaths in a study of fully vaccinated people.

“The study was a cohort of 1.2 million people who were vaccinated, and 36 people passed [away], demonstrating the remarkable effectiveness of our vaccines,” Walensky explained Tuesday.

“But no less tragic is the 36 people who passed [away] because of COVID-19, and that many of them had comorbidities — comorbidities that I’ve spent my career taking care of, comorbidities that just prior to coming to the CDC we saw time and time again disproportionately impacting people with COVID-19.”

The disease has killed more than 800,000 Americans, but some skeptics have spent much of the past two years trying to minimize the pandemic’s devastation. Friday’s clip seemed to give them the evidence they had long sought.

“Shocking,” wrote Sen. Ted Cruz, R-Texas, in a tweet he would subsequently delete. “Some of us have been saying this for TWO DAMN YEARS,” a reference to the argument, proffered by allies of former President Donald Trump, that the severity of the coronavirus was being amplified by the Democratic Party and members of the mainstream media.

“Now She Tells Us,” read the headline of a Wall Street Journal column published on Monday that argued that “the vast majority of people do not face as great a risk as one would think from listening to Covid-era apocalyptic forecasts from people like her.”

In fact, the risks of COVID-19 are low for the fully vaccinated — and even lower for people who have received their booster shot. But that is an entirely different point, one that public health officials scrambled to make as Walensky’s clip went viral, promoted by conservative commentators like Clay Travis, who wrote on Twitter that since “Biden can’t shut down covid, suddenly all this data is getting shared publicly.” The version of Friday’s interview that Travis shared with his 840,000 followers has garnered nearly 4 million views.

But a fuller version of the ABC interview makes Walensky’s context clear: that is, that she addressed the study before discussing the low number of COVID-19 deaths within it.

“Anti-vaxxers and the media ecosystem that caters to them seized on the clip in bad faith because it seemed that Rochelle Walensky had confirmed all of their suspicions about the pandemic,” wrote the pseudonymous conservative blogger Allahpundit, who was among the first to call attention to the complete quote.

The extended version makes plain that Walensky was referencing a study of 1,228,664 vaccinated people, 36 of whom died from COVID-19. Of those people, 28 — 75 percent — had other conditions that made them more susceptible to the ravages of the coronavirus, including heart and respiratory disease.

The crucial section that was excised has Walensky stating that 0.015 percent of the people in that study suffered severe illness and 0.003 percent died, a testament to what she called “the remarkable effectiveness” of the vaccine when given the chance to explain the interview by Sen. Bob Casey, D-Pa., during Tuesday’s hearing.

Even the edited version showed she was describing one study of vaccinated people, not all Covid-19 deaths, but that’s way clearer unedited. pic.twitter.com/ZEt7opmDCY

Although both the Delta and Omicron variants can break through the protection provided by vaccines, people appear to generally experience much milder symptoms if they are inoculated, especially when it comes to Omicron.

“Days and days of distortions, all based on a bad edit by someone at ABC,” lamented media critic Brian Stelter of CNN. “Time is precious in TV, and the host’s question provided context, but it still feels wrong to edit Walensky this way.”