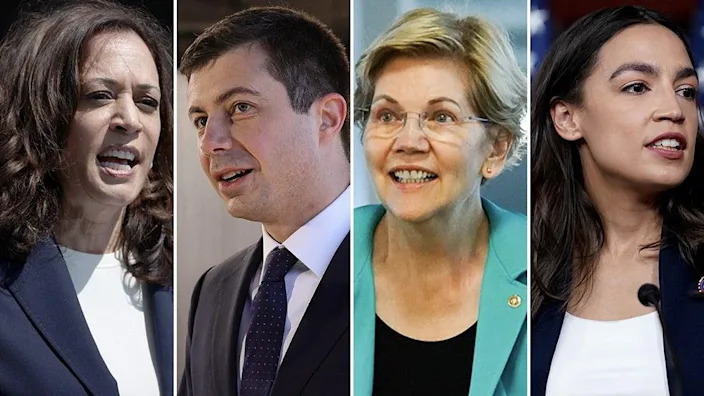 The 2022 midterm elections are less than a year away, but questions are already being raised about what the Democratic ticket will look like in 2024.

The White House has repeatedly said that President Biden intends to run again in 2024, but political watchers point to the fact that Biden would be 82 years old at the start of a second term. He was already the oldest individual to be inaugurated when he was sworn in in January.

On top of that, Biden is facing a stalled agenda on Capitol Hill, declining approval ratings and a continuing pandemic.

Vice President Harris would seem like the most likely pick to run in Biden’s place if he does not run. Many viewed Biden’s pick of Harris as his vice presidential pick as a signal that Harris was being prepped to succeed Biden down the line as a presidential candidate and leader of the Democratic Party.

A hypothetical poll of a future Democratic primary without Biden conducted by Morning Consult showed Harris leading the field with 31 percent support among the party’s potential primary voters. Still, Harris has had to contend with negative coverage throughout the course of her first year as vice president. Recently, a number of Harris staffers have departed her office, although some had previous plans to leave by the end of 2021.

Despite the 2024 chatter, Harris said in an interview last week that she and Biden have not discussed whether he will run again in 2024.

“We do not talk about nor have we talked about reelection, because we haven’t completed our first year and we’re in the middle of a pandemic,” Harris told The Wall Street Journal.

Transportation Secretary Pete Buttigieg came in second to Harris in the hypothetical Morning Consult Democratic primary poll with 11 percent support among potential Democratic primary voters. Buttigieg made waves in the 2020 Democratic presidential primary, winning the most delegates in the Iowa caucuses and narrowly losing the popular vote to Sen. Bernie Sanders (I-Vt.). Buttigieg also made history as the first openly gay candidate to seek the Democratic nomination for president.

However, like Harris, Buttigieg has brushed off 2024 chatter. Earlier this month, he said he was focused on his job as Transportation secretary, telling reporters, “It’s 2021.”

“The whole point of campaigns and elections is when they go well you get to govern. And we are squarely focused on the job at hand. I am excited to be part of a team led by the president and the vice president. and I think the teamwork that got us to this point is really just beginning,” Buttigieg said.

Sen. Elizabeth Warren (D-Mass.) was once a front-runner in the 2020 Democratic presidential primary and is still considered one of the most prominent figures in the party. The Massachusetts senator is particularly popular with the party’s progressive wing.

In the 2020 Democratic presidential primary, Warren was seen as Sanders’s main progressive rival; however, Sanders has said it is very unlikely that he will run again in 2024.

Rep. Alexandria Ocasio-Cortez (D-N.Y.) is also an influential leader of the progressive movement, and her star is only continuing to rise within the Democratic Party.

The Democratic lawmaker tied with Warren at 8 percent support among potential Democratic primary voters in the Morning Consult survey.

Ocasio-Cortez, 32, would be eligible to run for president in 2024, but she appeared to brush off any presidential ambitions for the time being during an interview with CNN’s Dana Bash earlier this year.

“I struggle with this because I don’t want little girls watching or anything like that to lower their sights or anything in that direction. But for me, I feel that if that was in the scope of my ambition, it would chip away at my courage today,” Ocasio-Cortez said. “I think what happens a lot in politics is that people are so motivated to run for certain higher office that they compromise in fighting for people today. And the idea is that if you can be as clean of a slate or as blank of a slate, that it makes it easier for you to run for higher office later on.”

However, Ocasio-Cortez did not completely rule out a potential primary challenge to Senate Majority Leader Charles Schumer (D-N.Y.).

“For what it’s worth, Sen. Schumer and I have been working very closely on a lot of legislation and that, to me, is important,” she said. “And so we shall see.”

Sen. Cory Booker (D-N.J.) ran in the 2020 Democratic presidential primary before he dropped out of the race prior the Iowa caucuses in January 2020.

Still, Booker is seen as one of the more well-known faces in the Democratic Party, particularly in the Senate. He garnered 5 percent support from potential Democratic primary voters in the hypothetical Morning Consult survey.

He raised eyebrows last month when he traveled to the early primary state of New Hampshire to headline a state party fundraiser.

Speculation is swirling around the ambitions of California Gov. Gavin Newsom (D), who in September became the first California governor to survive a recall attempt, which put him on the national radar.

But the governor said in an interview with CBS News in September that a presidential bid was not on his radar at the moment.

“Literally 100 percent never been on my radar. Was never a childhood dream,” Newsom said.

Sen. Amy Klobuchar (D-Minn.) is another 2020 Democratic primary alum. Her most successful performance in the primary was coming in third place in the New Hampshire primary.

The senator is also seen as someone who is from Biden’s more moderate wing of the party. She garnered 3 percent support among potential Democratic primary voters in the Morning Consult survey.

Georgia Democratic gubernatorial candidate Stacey Abrams has not been shy about her presidential ambitions.

“Do I hold it as an ambition? Absolutely,” Abrams said in an interview earlier this year with CBS News.

Since narrowly losing to Gov. Brian Kemp (R) in Georgia’s 2018 gubernatorial primary, Abrams has flexed her political strength. She played a leading role in the battle to flip Georgia from red to blue at the presidential and Senate levels last year through her organization Fair Fight Action.

At the moment, Abrams is focused on her present gubernatorial run in the state, which the nonpartisan Cook Political Report rates as a “toss-up.” Abrams’s campaign manager Lauren Groh-Wargo ruled out a 2024 presidential run in an interview with Axios Atlanta earlier this month, saying Abrams would serve a full term as governor if elected in 2022.

North Carolina Gov. Roy Cooper has been floated as a potential 2024 contender given his status as a Democratic governor in a red state. The New York Times reported earlier this month that Democratic donors were courting Cooper to consider a presidential bid.

However, Cooper, who will lead the Democratic Governors Association next year, said he fully expects Biden to run in 2024 and that he will support him, according to the Times.

A spokesperson for Cooper also reiterated that Cooper is in full support of the president.

“The governor supports President Biden and is focused on ensuring North Carolina emerges from the pandemic even stronger than before and implementing the president’s plans to create better jobs and support families here in our state,” the spokesperson said.

Former New Orleans Mayor Mitch Landrieu is another big Democrat who has been floated by some as a potential 2024 contender in the event that Biden does not run.

Landrieu, who was most recently appointed to oversee the implementation of Biden’s infrastructure plan, also served as lieutenant governor of Louisiana from 2004 to 2010. He also comes from a famous Democratic family, which includes his sister, former Sen. Mary Landrieu (D-La.).