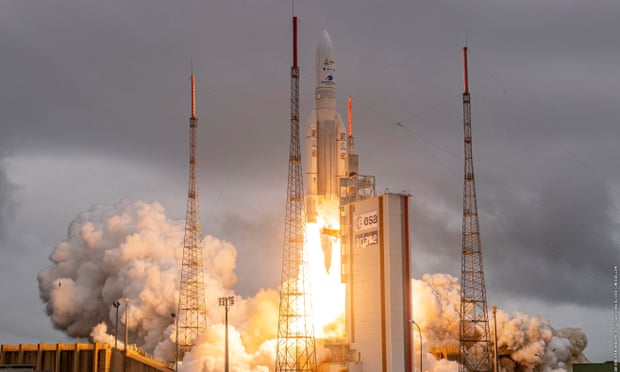 The world’s largest and most powerful infrared telescope has been launched into space on a mission to examine the first stars and galaxies and scour the universe for signs of life.

Scientists from Nasa, who worked with colleagues from the European and Canadian space agencies, believe the roughly $10bn James Webb space telescope – a successor to Hubble – will be the foremost space-science observatory of the next decade.

The instrument was packed into the cargo bay of an Ariane 5 rocket that blasted off from the European Space Agency’s launch base in French Guiana at 12.20pm on Saturday.

Nasa planned to for it to be released from the French-built rocket after a 26-minute ride into space, before spending a month coasting towards its destination in solar orbit about a million miles from Earth – roughly four times more distant from this planet than the moon.

The launch had been scheduled for Christmas Eve but a forecast of high-level winds at the spaceport forced it to be postponed.

First, the telescope’s enormous mirror and sunshield need to unfurl, having been folded origami-style to fit into the rocket’s nose cone. Scientists hope that will allow the observatory to peer back in time 13.7bn years – to a point within a mere 100m years of the big bang.

The telescope’s showpiece is a gold-plated mirror more than 6.5 metres (21 feet) across. Protecting the observatory is a wispy, five-layered sunshield, vital for keeping the light-gathering mirror and heat-sensing infrared detectors at subzero temperatures.

“It’s going to give us a better understanding of our universe and our place in it: who we are, what we are, the search that’s eternal,” Nasa administrator Bill Nelson said earlier this week. But he cautioned: “When you want a big reward, you have to usually take a big risk.”

Thousands of people from 29 countries have worked on the project since the 90s. With the launch falling on Christmas amid a global surge in Covid cases, there were fewer spectators at the launch site than expected.

Around the world, astronomers had eagerly waited to see Webb finally taking flight after years of setbacks. Last-minute technical snags bumped the launch nearly a week, then gusty wind pushed it to Christmas. Inside launch control, there was a smattering of Santa hats.

“We launch for humanity this morning,” Arianespace’s chief executive Stéphane Israël said minutes before liftoff. “After Webb, we will never see the skies in quite the same way.”