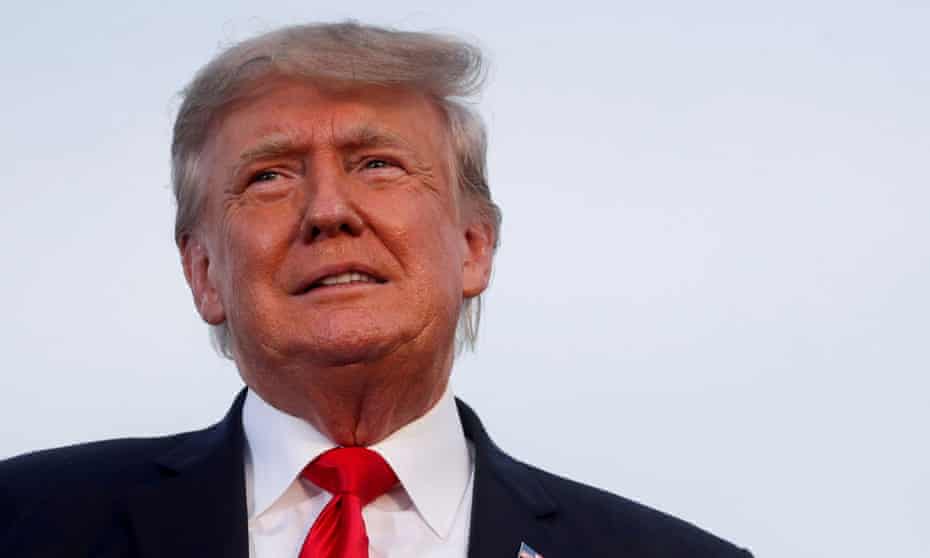 The New York attorney general, Letitia James, said on Monday her investigation of Donald Trump’s business affairs would continue “undeterred”, despite Trump suing to stop it on grounds of political bias, “because no one is above the law, not even someone with the name Trump”.

The New York Times first reported Trump’s lawsuit, filed in federal court in Syracuse, New York. It alleges that James, a Democrat, “is guided solely by political animus and a desire to harass, intimidate and retaliate against a private citizen who she views as a political opponent”.

James is investigating whether the Trump Organization manipulated valuations of its real estate properties.

In one such instance, as Trump ran for president in 2016, the Guardian reported on differing valuations of a golf club outside New York City. The headline: How Trump’s $50m golf club became $1.4m when it came time to pay tax.

The Washington Post and other outlets have reported similar alleged practices at other Trump properties.

Last year, investigators working for James interviewed Eric Trump, one of the former president’s sons and a Trump Organization executive. James went to court to enforce a subpoena and a judge forced the younger Trump to testify, after his lawyers canceled a deposition.

In an investigation that could only result in civil charges, James recently said she would seek to question Donald Trump under oath.

It is rare for law enforcement agencies to issue a civil subpoena for testimony from a person also the subject of a related criminal investigation, partly because the person could simply cite their fifth amendment right to remain silent.

It is unlikely Trump’s lawyers would allow him to be deposed unless they were sure his testimony could not be used against him in a criminal case.

Trump’s business and tax affairs are also the subject of a criminal investigation run by the Manhattan district attorney, Cyrus Vance, and in progress for more than three years. James joined that investigation in May.

The Manhattan case includes a focus on whether the Trump Organization overstated the value of some real estate assets to obtain loans and tax benefits.

In their lawsuit against James, who recently announced a run for governor of New York before stepping back, Trump and the Trump Organization claim the attorney general has violated their rights under the US constitution by pursuing a politically motivated investigation.

Trump and the company pointed to public statements James made before she was elected as attorney general.

The lawsuit also made a plainly political play of its own, echoing Trump’s language in office and on the campaign trail when it said: “Rather than diligently prosecuting actual crimes in the state of New York – which are steadily on the rise – James has instead allocated precious taxpayer resources towards a frivolous witch hunt.”

Trump and the Trump Organization are seeking a court order barring the investigation from going forward.

In a statement, Trump’s attorney, Alina Habba, said: “By filing this lawsuit, we intend to not only hold her accountable for her blatant constitutional violations, but to stop her bitter crusade to punish her political opponent in its tracks.”

In her own statement, James said: “The Trump Organization has continually sought to delay our investigation into its business dealings and now Donald Trump and his namesake company have filed a lawsuit as an attempted collateral attack on that investigation.

“To be clear, neither Mr Trump nor the Trump Organization get to dictate if and where they will answer for their actions. Our investigation will continue undeterred because no one is above the law, not even someone with the name Trump.”

James also noted that “in August 2020, [she] “filed a motion to compel the Trump Organization to provide … documents and testimony from multiple witnesses regarding several, specific Trump Organization properties and transactions.

“Since then, the court has ruled in Attorney General James’ favor multiple times.”

Cohen said he was confident prosecutors could “indict Donald Trump tomorrow if they really wanted and be successful”.

Asked if he was “confident you did help Donald Trump commit crimes”, Cohen told NBC: “I can assure you that Donald Trump is guilty of his own crimes. Was I involved in much of the inflation and deflation of his assets? The answer to that is yes.”

In July, the longtime Trump Organization chief financial officer, Allen Weisselberg, pleaded not guilty to criminal charges in what a prosecutor in Vance’s office called a “sweeping and audacious” 15-year tax fraud.