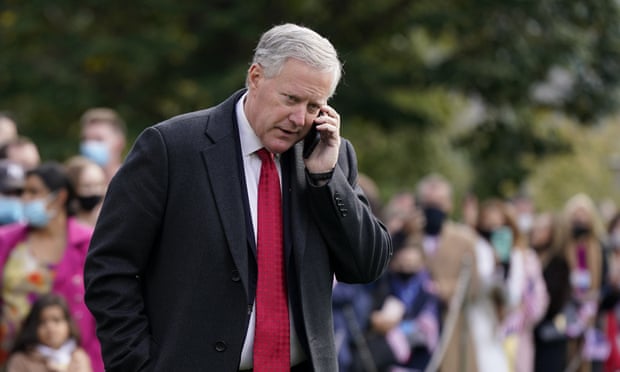 The US House of Representatives has approved a measure recommending criminal contempt charges against Mark Meadows, the former chief of staff to Donald Trump, a week after he ended his cooperation with the chamber’s committee investigating the Capitol insurrection.

The approval marks the first time the House has voted to hold a former member in contempt since the 1830s, according to the chamber’s records.

It is the latest show of force by the 6 January panel, which is leaving no angle unexplored as it investigates the worst attack on the Capitol in more than 200 years. Lawmakers are determined to get answers quickly, and in so doing reassert the congressional authority that Trump eroded while in office.

“History will be written about these times, about the work this committee has undertaken,” said Bennie Thompson, the committee’s chairman.

Meadows, a former North Carolina congressman, left in March 2020 to join Trump’s administration. Before he left Congress, Meadows “continually insisted that people and high-ranking government officials respect the authority of Congress to do its job, and investigative powers are implicit in and intertwined with our powers to legislate this”, said Jamie Raskin, a member of the committee.

Raskin began Tuesday’s debate by reading from newly released, frantic texts from the day of the attack revealing members of Congress, Fox News anchors and even Trump’s son urging Meadows to persuade the outgoing president to act quickly to stop the three-hour assault by his supporters.

Tuesday’s vote followed a recommendation by the committee that Meadows be charged. The matter now heads to the justice department, which will decide whether to prosecute.

Republicans on Tuesday called the action against Meadows a distraction from the House’s work, with one member calling it “evil” and “un-American”. Trump has also defended Meadows in an interview, calling him “an honorable man”.

The committee’s leaders have vowed to punish anyone who doesn’t comply with their investigation, and the justice department has already indicted Trump’s longtime ally Steve Bannon on two counts of contempt after he defied his subpoena. If convicted, Bannon and Meadows could face up to one year behind bars on each charge.

However, in a Tuesday statement, Meadows’ attorney George Terwilliger said the former chief of staff had never stopped cooperating but maintained he could not be compelled to appear for an interview. The attorney said Meadows had “fully cooperated” with respect to documents that are in his possession and are not privileged.

Meadows himself has sued the panel, asking a court to invalidate two subpoenas that he says are “overly broad and unduly burdensome”.

Members of the committee said the text messages sent to Meadows on the day of the insurrection raised fresh questions about what was happening at the White House, and what Trump himself was doing, as the attack was under way. The committee had planned to question Meadows about the communications, including 6,600 pages of records taken from personal email accounts and about 2,000 text messages. The panel has not released any of the communications in full.

The Republican congresswoman Liz Cheney of Wyoming, the panel’s vice chairwoman, said at the committee’s Monday evening meeting that an important issue raised by the texts was whether Trump had sought to obstruct the congressional certification by refusing to send a strong message to the rioters to stop.

“These texts leave no doubt,” Cheney said. “The White House knew exactly what was happening at the Capitol.”

The investigating panel has already interviewed more than 300 witnesses, and subpoenaed more than 40 people, as it seeks to create the most comprehensive record yet of the lead-up to the insurrection and of the violent siege itself.