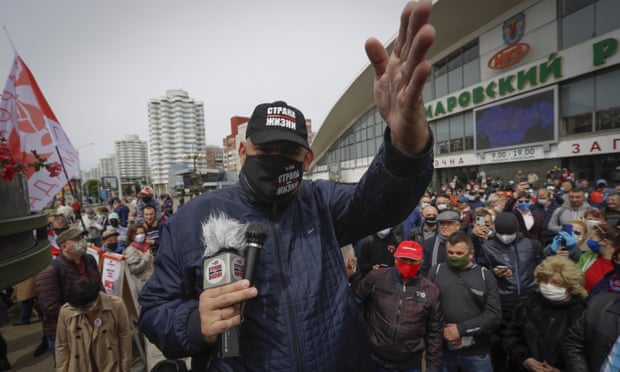 Belarus has sentenced the husband of the opposition leader Sviatlana Tsikhanouskaya to 18 years in prison for challenging the authoritarian ruler, Alexander Lukashenko, and helping to spark the biggest demonstrations in the country’s modern history.

Syarhei Tsikhanouski, a popular video blogger, was arrested in 2020 as he campaigned to run for president against Lukashenko, whom he compared to a cockroach. He was charged with organising mass unrest and inciting social hatred.

His wife took his place on the ballot in August’s presidential elections. Those ended in accusations of vote rigging, mass street protests, and a bloody crackdown on opposition with accusations of police brutality and torture. Since then, Lukashenko has sought vengeance on his political rivals.

“The dictator publicly takes revenge on his strongest opponents,” Tsikhanouskaya tweeted from exile in Lithuania on Tuesday. “While hiding the political prisoners in closed trials, he hopes to continue repressions in silence. But the whole world watches. We won’t stop.”

The sentence is among the toughest punishments handed down for last year’s anti-Lukashenko protests. In the same sentencing, five supporters tried with Tsikhanouski were jailed for between 14 and 16 years.

One of them was Ihor Losik, a blogger accused of using his Telegram channel to organise opposition against Lukashenko. Losik was given a 15-year prison sentence. He has a two-year-old daughter.

“How will you live on, hug your children, those close to you, knowing what you have done today?” Losik’s wife, Daria, said in an address to the judge and prosecutors after the sentencing. “I hope it will be bad, knowing that you’ve destroyed the future and lives of innocent people. I hope it will hurt you.”

Lukashenko has faced international condemnation for sparking a migration crisis on the borders with the EU and for scrambling a fighter jet to ground a Ryanair flight carrying another blogger and journalist critical of his regime.

In the last year he has launched a broad purge of Belarusian society, jailing hundreds from the worlds of politics, journalism and the arts and forcing thousands more into exile. The Viasna human rights centre estimates there are 920 political prisoners in Belarus, and torture survivors have applied to foreign governments and the UN to take action against Lukashenko’s regime.

The government has systematically prosecuted Lukashenko’s main political opponents from last year’s elections. Earlier this year a Belarusian court sentenced the presidential contender Viktar Babarika to 14 years in prison on charges of corruption. The ex-banker was a heated critic of Lukashenko, telling the Guardian in 2020 that the president had “lost touch with reality”.

Maria Kalesnikava, a senior aide to Babarika and then a member of the opposition’s coordination council, was sentenced to 11 years in prison. When government agents tried to expel her from the country, she ripped up her passport, leading to her eventual prosecution for conspiracy to seize power and other crimes.

As a rule, the court proceedings have been closed to the public. Tsikhanouski’s case was also deemed a state secret and lawyers were banned from sharing information about the trial with the public.

Tsikhanouskaya said in an earlier interview that she had received little information about her husband but that he had been kept in an isolation cell for 10 months and had kept up his spirits by reading and writing a lot. “I will try to do something very difficult, perhaps impossible, in order to bring closer the moment when we will see him in the new Belarus,” she said before the verdict was read.

Mikalai Statkevich, a former presidential candidate in 2010, was sentenced to 14 years imprisonment. The activist Artsiom Sakau and the blogger Dmitry Popov were also sentenced to 16 years, while Uladzimir Tsyhanovich, another blogger, was jailed for 15 years. All had supported Tsikhanouski and were charged with variations of incitement to violence and rioting, charges they denied.

The UN special rapporteur Anaïs Marin said more than 35,000 people had been arbitrarily detained over the past year and tens of thousands of Belarusians had fled abroad, fearing repression.