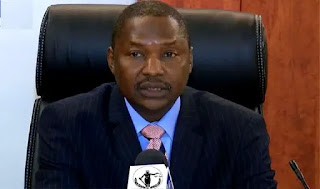 The Attorney-General of the Federation and Minister of Justice, Abubakar Malami, SAN, has ordered the Economic and Financial Crimes Commission, EFCC, to remit the money laundering case file involving a former Minister of Aviation, Mrs. Stella Oduah, to the Federal Ministry of Justice for review.

Malami’s directive followed a petition alleging that the anti-graft agency was being used to persecute the erstwhile Minister.

Oduah, who served as Aviation Minister from 2011 to 2014, and currently the Senator representing Anambra North, is facing a 25-count money laundering charge the EFCC preferred against her and eight others.

EFCC alleged that the Defendants conspired and laundered funds to the tune of about N5billion.

At the scheduled arraignment of the Defendants before the Federal High Court sitting in Abuja on Monday, a lead defence counsel, Mr. Ogwu Onoja SAN, notified the court that the AGF had on the strength of the petition dated February 4, called for the case file.

He argued that it would not be proper for the court to proceed with the arraignment, when the EFCC is yet to respond to the AGF’s request.

Onoja, went ahead and tendered a copy of the said petition to the court.

“My lord, we are of the strongest view that plea cannot be taken on this matter.

There was a petition written to the Attorney General of the Federation which is a complaint made against this prosecution. That was because we found out that this trial was a persecution, and we got a response from the AGF.

“The AGF requested for the file, but up till now, the EFCC has refused to send the case file to the AGF.

This case is a matter of persecution and not prosecution. Based on that, we have an objection that this plea cannot be taken.

“I have a certified true copy of the letter the AGF wrote to the EFCC,” Onoja added.

Responding, EFCC’s lawyer, Mr. Ufem Uket, said though he only saw the said letter from the AGF in the courtroom, he argued that a mere petition was not sufficient enough to abort the planned arraignment of the Defendants.

“My lord, it is not in doubt that the AGF has powers to intervene, continue or discontinue a case.

“However, the fact that a petition has been written to the AGF, does not stop the plea from being taken”, he argued.

Meanwhile, trial Justice Inyang Ekwo noted that the intervention of the AGF in the matter created a constitutional issue that would not be summarily dismissed by the court.

He, therefore, ordered all the parties to file process to address the court on whether it should proceed to take plea of the Defendants in view of the new development.

“I have heard the arguments from lawyers. I am not going to treat this matter lightly.

“Therefore, I make an order that the prosecution shall file and serve a written address on this matter within 30 days, which will be limited to 15 pages.

Learned counsel of the seventh defendant are to file a response. I will also order the the other learned counsels file written addresses upon being served by the prosecution”.

While adjourning the matter till February 10, 2022, for adoption of written addresses, the court held that the Defendants should continue on administrative bail that was earlier granted to them by the EFCC.

It will be recalled that Oduah had earlier decamped from the Peoples Democratic Party, PDP, to the ruling All Progressives Congress, APC.

EFCC had in charge, alleged that Oduah and Odita who was identified as her aid and the Company Secretary to Sea Petroleum & Gas Company Ltd (SPGC), in February 2014, used their positions to transfer the sum of N1,629,250,000.00 from I-Sec Security Nig. Ltd account No. 2021756955 with First Bank Plc, to Global Offshore and Marine Ltd account No. 2022977296 also domiciled with First Bank Plc, which money they reasonably ought to have known that it formed part of the proceeds of an unlawful act.

Oduah and Odita were in count 24, accused of opening a naira “anonymous Private Banking Nominee Account No. 2024414450 with First Bank Plc and thereby committed an offence contrary to Section 11(1) of the Money Laundering (Prohibition) Act 2011 (As Amended) and punishable under Section 11(4) (a) of the same Act.”

They were, equally accused of opening a United State dollar “anonymous Private Banking Nominee account No. 2024414498 with First Bank Plc and thereby committed an offence contrary to Section 11(1) of the Money Laundering (Prohibition) Act 2011 (As Amended) and punishable under Section 1 1(4) (a) of the same Act.”