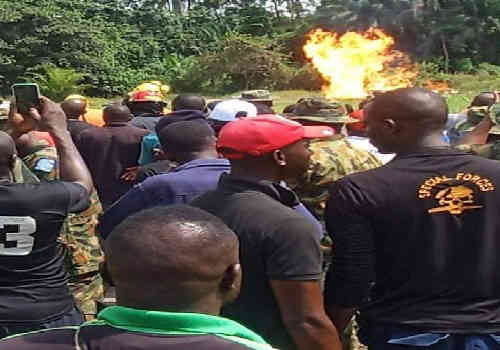 A new militant group in the Niger Delta known as Bayan-Men has blown up a Nigerian Agip Oil Company (NAOC) oil facility in Rivers State’s Ogba-Egbema-Andoni Local Government Area. Read Also : Why President Buhari must not release Nnamdi Kanu – Arewa youths The militants who demolished the OB5 (Obiavu-5) oil well in the area accused the oil company of failing to deal directly with the host communities, insisting that they were fighting for justice for their people.

According to the federal government resolution, “the only thing we want Agip to do is to deal directly with the 27 communities of Omoku,” he said.

This isn’t a joke.”We have no desire to murder anyone. We have a vested interest in them doing the right thing, or we will continue to blow up their facilities. We’re giving them 24 hours to begin the process of doing what’s right. ” Ekeuku Pureheart, the Coordinator-General of the Omoku Community Youth Leaders Forum (OCYLF), confirmed the development, saying that it resulted from Agip’s failure to obey the people’s demands. Agip should recognise the various communities that make up Omoku, according to Pureheart, because “the boys” have threatened to carry out more attacks.

The Federal Government intervened a long time ago,” Pureheart said. Some unruly boys and militia groups have detonated a bomb at the Agip oil well, OB5. The oil well is known as Obiavu-5. “The boys have threatened to do more if Agip does not engage directly with the communities of Omoku and give them what they are owed.” “We’re pleading with the federal government and other relevant agencies to step in before things spiral out of control.” This could result in a decrease in output. The government does not want any situation to arise that will lead to a further drop in production. ” The group is expressing its dissatisfaction with the situation. Agip is oppressing the people of Omoku with the help of a few individuals, and the boys are saying they will no longer accept it. ” He mentioned that Agip was still battling the raging fire at the facility.

Agip is already there, attempting to extinguish the flame, Pureheart says. They’ve arrived with firefighters to help put out the fire. The group claims that Agip should deal with individual communities because that is what the law says.Omoku is a collection of villages. And the law states that when you arrive on any land, you must treat the people differently and give them what they are owed.

They must follow the FG resolution of February 27, 2021, and the agreement must be implemented in accordance with the Petroleum Industry Act.”We are urging the FG to take a break in order to ensure that the agreement is fully implemented.”