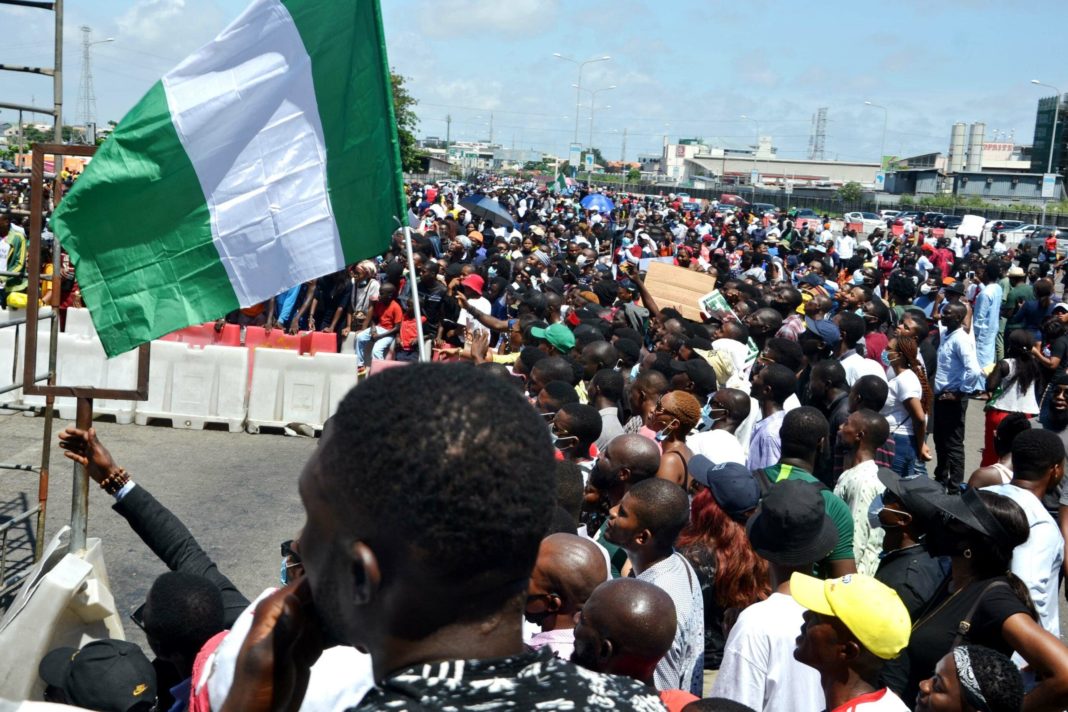 Facebook
Twitter
Pinterest
WhatsApp
The leaked report by the Lagos State Judicial Panel of Inquiry and Restitution on Lekki Toll Gate Shooting Incident and Cases of Police Brutality as well as human rights violations, is currently generating controversy across the country.

The 309-page report which went on circulation since Monday has indicted the Nigerian Army and the Police of being responsible for the death of protesters at the Lekki Tollgate, admitting that there was a massacre.

The report has, however, generated controversies from concerned Nigerians who called out the presidency over its constant claim that there was no such killings by the Nigerian army and the police.

Many stakeholders have lambasted President Muhammadu Buhari over the content of the report, accusing him of masterminding the massacre of the Nigerian youths who were protesting against extrajudicial killings by the police particularly the disbanded Special Anti-Robbery Squad, SARS.

A former presidential aide, Reno Omokri, upon sighting the report, swiftly issued a petition on the change.org platform against the president, saying Buhari ordered the shooting which led to the death of unspecified Nigerian youths.

Following the report which is currently being studied by the Lagos State government, the former presidential aide petitioned Buhari for allegedly ordering the Lekki shooting.

As of 8pm on Friday when The Publisher Nigeria visited the website, it was observed that about 86, 000 Nigerians have signed the petition which is directed to the International Criminal Court – ICC, to prosecute the President over the allegations.

According to Omokri, the petition will be submitted to the President of the ICC, Piotr Hofmański after it receives hundred thousand (100,000) signatures.

He said, “By the grace of God, Buhari will retire to prison in 2023 and all future Presidents will see that there is a consequence to the mass murder of Nigerians by the state.”

Recall that Anthony Ehilebo, the Peoples Democratic Party, PDP, Director of New Media, on Thursday called for the sack of Lai Mohammed, the Minister of Information and Culture, over the EndSARS panel report.

Ehilebo who expressed anger over the controversy surrounding the Lekki shooting and the findings of the panel, also called for the immediate removal of former Chief of Army Staff, Lt. Gen. Tukur Buratai’s immunity to expose him to the wrath of the law.

It could be recalled that the Benin branch of the Nigerian Bar Association while reacting to the report, commended the panel for its timely finding, advising other states who had set up such panels to make their reports public to engender public confidence.

Similarly, the Peoples Democratic Party (PDP), while speaking on the report, described the ruling All Progressive Congress (APC) as a “murderous party”.

The opposition party, in a statement by Ita National Publicity Secretary, Kola Ologbondinya, on Tuesday, said the report of the panel confirming the gruesome killings of innocent youths, strengthened the fact that the APC was running a “murderous and oppressive regime”, that has no regard for life.

Following the outrage by Nigerians who stormed the various social media to express their grievances, the Lagos State Government on Wednesday, warmed those accusing it of killing the unarmed protesters.

A statement issued on Wednesday by the Information Commissioner, Gbenga Omotoso, appealed to the people to watch their words.

While claiming that there are at least 40 discrepancies in the report, he said it should not be in the news pending the original copy. Owonikoko also said that the content of the report is not completely accurate.

But the head of the panel, Ebun-Olu Adegboruwa SAN, on Friday, insisted that he acted on the mandate of the Governor, Babajide Sanwo-Olu, to fulfill his promise by making its findings public.

He raised the alarm over the alleged persecution of panel members, saying that since the report of its findings was submitted to the state government on Monday, some of them have been under media attacks.

Mr Adegboruwa said in his statement that members of the panel are being “unfairly persecuted,” and called names by some officials of the government.

Recall also that the United States, US Mission in Nigeria on Tuesday while welcoming the report, said America awaits the response from President Muhammadu Buhari’s government and the Lagos authorities, urging them to act fast on the report.

Responding to that, President Buhari on Thursday while meeting with the US Secretary of State, Antony Blinken, said that the Federal Government will allow the system to exhaust itself, stressing that it will wait for pronouncements from state governments that have set up panels to probe the alleged police brutality in the country.

This has also triggered reactions as some Nigerians alleged that the government is unhappy with the report and was probably expecting the panel to remain silent like other previous cases.

Some respondents said the government is currently struggling and finding a way to still cover up the massacre with lies.

A current affair analyst, Mr John Ameh who spoke to our correspondent, said, “I actually commend the Lago panel. They have done so well. From the reactions of the government, you can see that they were not expecting the panel to reveal the truth.

“This is how the Federal Government and even most states have been inaugurating panels to investigate crimes and at last, no report will come out. This one ‘choke’ them well.

“Even when the panels submit their reports, you find out that it will not be implemented and nothing will be heard about it again”.

He recalled the case of Human Rights Violations Investigation Commission of Nigeria, also called the Oputa Panel, which was set up by the former President, Olusegun Obasanjo to investigate the military dictatorship that controlled the country until 1998.

According to him, nothing has been done on the report till date, alleging that the federal and Lagos State government expected the panel on Lekki to take a similar step.

The recommendations of the Steve Oronsaye Panel on rationalisation of ministries, agencies and parastatals which was set up by the former President, Goodluck Jonathan is yet to be implemented by the Federal Government.

Recall also that the report of the panel headed by the Kaduna State Governor, Nasir El-Rufai on restructuring has not been implemented till date and government has taken no further actions.