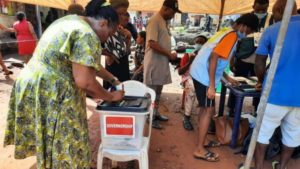 Anambra Decides; Vote buying has been reported at Polling Unit 010 in Ward 02, Nkwo Amaenyei market square, Awka South Local Government Area.
Reports coming directly from journalists at the unit, revealed that voters are being paid the sum of two thousand naira to vote for a particular party, The Publisher Nigeria reports.

An unnamed lady who appeared in green as seen in the shared photos was directed to a gated compound where she was given ₦2500 after casting her vote.