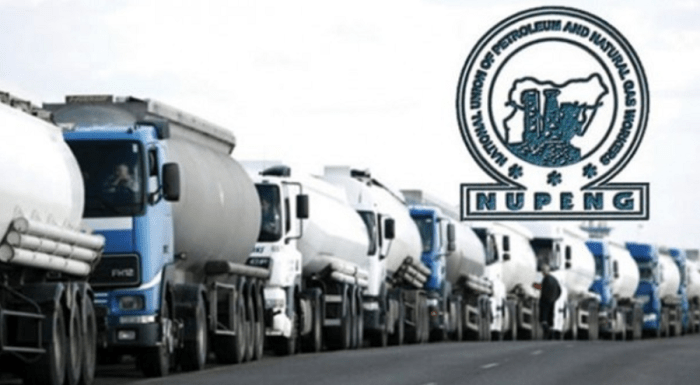 Petrol scarcity appears to be looming as the National Union of Petroleum and Natural Gas Workers (NUPENG) announced that its Petroleum Tanker Drivers (PTD) will commence strike on Monday, December 11, 2021.

NUPENG said that petroleum tanker drivers under its union will withdraw their services over the deplorable state of the nation’s highways and other issues.

This was disclosed by the South-West Zonal Chairman of NUPENG, Mr Tayo Aboyeji, during an interview with NAN on Saturday in Lagos in which he said that the union has lost many lives and properties due to bad roads.

What the NUPENG South-West Zonal Chairman is saying
Aboyeji, who said that majority of Nigerians would be affected by this action, however, insisted that all tanker drivers from the union would withdraw their services nationwide.

He said, “This is not the first time that we will signify our intention to go on strike but we have to call it off because it will generally affect majority of Nigerians but now our hands are tied. We are going on nationwide strike because of the deplorable and shameful state of our highways.

“When a truck loads petrol in Lagos, the drivers spend five to six days to get to Abuja because of the shameful state of the roads. All calls by the executive of petroleum unions have fallen on the deaf ears of the government as the highways continue to deteriorate nationwide.

“The list of the highway are endless and the tanker drivers have been going through harrowing situation while rendering selfless national service. The increase rate of fire incidences involving petroleum tankers with accompanying massive destruction of lives and properties of our members and general public is enough.

“This is because of government failure to enforce installation of safety gadget on tanker. This will protect the inflammation contents of their trucks from spilling over in a situation of road accident.

“We see the failure of the government in this regards as height of insensitivity to lives of innocent Nigerians and union cannot continue to hold its hands while our members are getting burnt everywhere and everyday.’’

While acknowledging the unscrupulous abuse of tonnage by some petrol tanker drivers, Aboyeji said that NUPENG is not happy about it.

He said, “There are some trucks that carry 60,000 litres to 100,000 litres on the highway. This load has a negative effect and impact on the safety and control of drivers on the wheel as well as durability and sustainability of the highway. The unions do not want any truck to carry more than the approved capacity.”

Aboyeji said the union had given notice to the government to put all these in order to avert the nationwide strike on Monday.

He said, “We know that the present administration would not do anything until we start the nationwide strike.’’

Bottom line
This is not the first time that the tanker drivers arm of NUPENG under the aegis of Petroleum Tanker Drivers (PTD) had threatened to embark on strike over the deplorable state of the roads across the country which constantly puts the lives of their members in danger.

However, nothing seems to have changed as the state of the roads are yet to improve.

Withdrawal of their services will bring more hardship to Nigerians and businesses because of the critical nature of these petroleum products.