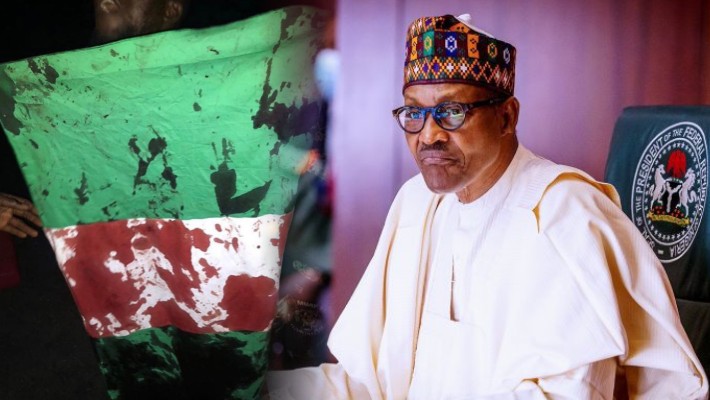 Nigerians have come to revere the flag as the symbol of the historic protest and vowed to amplify it every year in honour of civilians murdered by their own country’s soldiers flag on their profiles with rules violation.

The crackdown had been reported previously, but it intensified on Friday as Nigerians began a month-long advocacy to mark one year since the historic #EndSARS protest against police corruption and brutality

The flag made worldwide circulation last year after Nigerian soldiers deployed to quell the protest opened fire on protests in Lagos’ affluent Lekki suburb, killing at least nine civilians and wounding many others. The flag was used as a band-aid for some of the victims hit by the military bullets.

Nigerians have since come to revere the flag as the symbol of the historic protest and vowed to amplify it every year in honour of civilians murdered by their own country’s soldiers.

The lethal military response to a civil protest at the heart of Lagos was reportedly ordered by President Muhammadu Buhari, who has refused to allow justice for the victims or open investigation against possible culprits. The International Criminal Court has commenced investigation into the matter.

Several handles on Friday began reporting that they were receiving warnings from Twitter of rules violation after uploading the bloodied flag as their display image. The flag was captured at the scene of the deadly military operation on the night of October 20, 2020, near the busy Lekki Toll Gate.

The Gazette curated some of the complaints below.

We better not put too much trust in this called Twitter or its founder Jack. pic.twitter.com/KlmIVIZJcT
— Ayemojubar (@ayemojubar) October 1, 2021

If you see violence in this image, it means now you know what we are going through… Thank you for recognizing the injustices we suffer on a daily basis, we will forever be grateful for your support. pic.twitter.com/k0uDnyhA79

The development has fueled speculation that Twitter executives might have agreed to crack down on opposition voices to meet some of the draconian conditions set by the Buhari regime to lift its June 4, 2021, illegal ban on the social media giant in Nigeria.

Some pro-government handles have been asking Twitter to take down users with the bloodied flag on their profiles. It was unclear whether the handles received warnings after being reported by many pro-government users or if it was a deliberate decision on the part of Twitter.

@jack,@Twitter should be suspending any profile with or posting Stained     Flag. Freedom Of Expression doesn’t mean Nonsense should be tolerated. Don’t let children of anarchy pushed you to permanent ban

On September 3, Digital Africa Research Lab noticed that some handles were being warned against using the flag and asked users with similar experiences to report.

A spokesman for Twitter did not immediately return a request seeking comments from The Gazette on Friday evening.