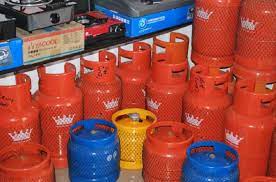 “To purchase a 12.5kg cylinder of cooking gas in a month, minimum wage earners must now spend a whopping 23.3% of their monthly wage…”

This was confirmed by our analyst after conducting interviews with several consumers, who lamented over what they described as a sudden hike in the price of Liquified Petroleum Gas (LPG) or what is commonly known as cooking gas, across major cities in Nigeria.

Some of them had expressed concerns in July 2021, the price survey shows cost of cooking gas was spiralling out of the reach of consumers, predicting that the price may hit its current N7,000 range. Even worse, now that the commodity is being sold between N7,000 and N7,200 across major cities, dealers warn that it is not yet ‘Uhuru,’ as further price increments are expected in October and no one can exactly tell what the price would be at the year’s end.

Consumers lament
Some LPG users who spoke in separate interviews complained about the development stating that they are now being forced to switch to alternative sources of cooking fuel.

Joy Bright, a consumer who is based in Oke Afa, Ogun State, expressed her fears over the rising cost of cooking gas in the area from N6,200 per 12.5 kg to N7,200 within 6 weeks.

“I was not surprised when the attendant told me the price because I had said in July that the cost will rise further.

“I had no choice but to buy it, as other alternatives are not options for me. I would not have felt it much if the power supply was regular,” she said.

Another consumer in Lagos, who simply referred to herself as Glory, said that she refilled her 12.5kg cylinder with N7,000 on Thursday. According to her, the rising cost of gas will have a severe impact on the average Nigerian and one of such is the cost of food bought from vendors.

“The cost of food items like rice, beans and even garri has been on the increase for months. This frequent hike in the cost of cooking gas will make matters worse, as several food vendors now use gas for their cooking.”

In case you missed it
Nairametrics had reported in July 2021, when the National Chairman of Liquefied Petroleum Gas Retailers Branch of NUPENG, Mr Chika Umudu, explained that the price hike was due to the country’s high dependence on importation for LPG.

He said, “As the dollar is appreciating against the naira, the price of LPG is increasing.”

According to him, the Nigerian LNG Limited, which accounts for more than 40% of the LPG supply volumes in the country, should be supplying the domestic market in accordance with the demand, rather than having a fixed quantity per annum.

“The increase in cooking gas price, which started last December, doesn’t speak well of the policy direction of the government.

“As much as I will not advocate for subsidy the way it is being done with petrol, I think there are ways the government could make cooking gas affordable to Nigerians,” he added.

A source in the Nigerian Association of LPG Marketers, explained that there was a need for frequent supply of LPG by the NLNG, adding that it was only one vessel they (NLNG) had, and it supplied Lagos and Port Harcourt; so the replacement cycle took longer.

“Since the country depends more on imports for the commodity, the demand for scarce foreign exchange by marketers to import the product will cause price hikes.

“There is a need for the domestic supply to be increased so that we can depend less on LPG importation.”

Bottomline
The incessant hike in the price of cooking gas coupled with the dwindling purchasing power of the average Nigerian does not bode well for the continued adoption of LPG by both rural and urban dwellers, and it is outrightly counterproductive to the government’s widely publicised LPG policy.

Considering that LPG is environment-friendly, convenient, and safe, there is a need for government’s intervention to make the product more affordable to most Nigerians.