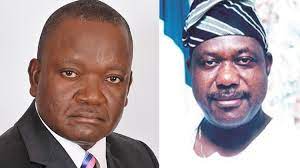 Ortom’s suit followed Akume’s comment during a press conference in Abuja, where the minister accused the governor of ineptitude, disrespect for the President, Major General Muhammadu Buhari (retd.), as well as massive corruption.

In the libel suit, Ortom is seeking N50bn as general damages and another N10bn as exemplary and aggravated damages.

Ortom complained that the press conference was intended to lower his estimation before right-thinking members of society and to expose him to hatred, contempt and ridicule.

He is seeking a perpetual injunction restraining the defendant by himself or through any agent, servants or privies from similar or further publication of any defamatory statement against him.

The court has yet to fix a date for the hearing of the case.

Earlier on Friday, the Jemgbagh Unity Forum described Akume’s corruption allegations against Ortom as “most unfortunate and laughable.”

The Leader of the forum, Chief Yandev Amaa-Bai, at a news conference in Makurdi on Friday, wondered when Akume, a former two-term governor of Benue, realised Ortom and his government were corrupt.