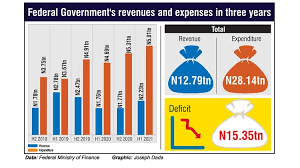 Within a three-year period covering July 2018 to June 2021, the Federal Government recorded a fiscal deficit of N15.35tn, statistics obtained from the Budget Office of the Federation have shown.

The Publisher Nigeria learnt from the Ministry of Finance showed that during the review period, Federal Government retained revenue stood at N12.79tn, while aggregate expenditure stood at N28.14tn.

The major sources of government revenue include oil revenue and non-oil revenue comprising of revenue from value added tax, company income tax, stamp duty and others.

A breakdown of the figures showed that in the second half of 2018, the Federal Government generated N1.78tn as revenue and spent a total of N3.75tn, resulting in a fiscal deficit of N1.97tn.

For the 2019 fiscal period, aggregate revenue generated in the first half of the year stood atN2.78tn but fell to N2.47tn in the second half.

Further analysis revealed that the government in 2020 earned N3.53tn as aggregate revenue and spent N10tn, creating a fiscal deficit of N6.52tn.

Aggregate expenditure of N10bn showed that N4.69tn was incurred in H1 while N5.31tn was spent in H2.

The inability of the government to raise the much needed revenue to finance its operations resulted in a deficit of N1.37tn in the first quarter while the second, third and fourth quarter deficits were put at N1.54tn, N1.74tn and N1.86tn respectively.

The Overview of 2022 FGN Budget Call Circular report, the federal government’s retained revenue for H1 2021 was N2.23tn, which represented a N1.07tn shortfall of the prorated target of N3.3tn for the review period.

Other revenues amounted to N922.09bn, of which independent revenues were N558.13bn.

On the expenditure side, N5.81tn was spent during the period under review comprising N2.02tn used for debt service, N1.795tn for personnel cost, including pensions and N1.3tn released for capital expenditure.

With an expenditure of N5.81tn and aggregate revenue of N2.23tn, the government recorded a fiscal deficit of N3.58tn in the first half of the 2021 fiscal period.

Economists who spoke on the development called on the government to shore up revenue by cutting the cost of governance and expand the tax net.

A senior lecturer in economics at the Pan Atlantic University, Dr Olalekan Aworinde, said the huge deficit could be attributed to the dwindling revenue of the government and high cost of governance.

He said, “The situation here is caused by dwindling revenue or it isn’t growing and there are so many reasons; one may be that there are loopholes in the collection of government revenue.

“Currently there are a lot government loopholes whereby tax operatives who are supposed to collect taxes end up colluding with tax payers to evade tax.

“The third reason for the deficit is tax evasion which deplete government revenue.”

He added, “The way out is that government should reduce the cost of governance. Also, they should look inward. “There should be retraining and reorientation of tax payers. Let the tax payers know what their taxes are being used for such as capital projects. This will encourage them to be more diligent in tax payments.”

The Chairman of the Foundation for Economic Research and Training and a former Director-General of the West African Institute for Financial and Economic Management, Prof. Akpan Ekpo, said that beside ensuring strict tax payment and expanding the tax base, the Federal Government should focus on creating balanced budgets where the amount projected for expenditure and revenue tally.

Ekpo said, “One of the ways to cover up the deficit is to have a balanced budget, where the expenditure matches your revenue.

“The second is by enhancing domestic resource mobilisation efforts, and one way of doing that is to bring many Nigerians into the tax net, not to increase tax rates, but to expand the tax base.

“Also, people who have luxury goods like private jets should be properly taxed.”

The president of the Abuja Chamber of Commerce and Industry, Dr Al-Mujtaba Abubakar, called on the Federal Government to shore up revenue by cutting the cost of governance and reject pressures to create agencies as reflected in several ongoing bills at the National Assembly.