Home Politics Secondus And The Unceremonious Ousting Of PDP Chairmen 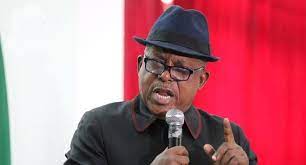 The unceremonious ousting of Prince Uche Secondus from office as National Chairman of Peoples Democratic Party (PDP), has once again reminded one of the banana peel that comes with the office.

Since the formation of the party 1998, none of its national chairmen have bowed out ceremoniously.

When Prince Secondus was elected national chairman of the party on December 10, 2017, many expected that his time at the helm of the party will usher great things with many looking forward to December 2021 that he is expected to complete his four year tenure. But like his predecessors, he was ceremoniously kicked out following crisis that hits the party, which climaxed in his expulsion from the party by his ward in Andoni local government area of Rivers state and a Rivers state court order restraining him from performing the functions of the National chairman and from parading as the party’s henchman.

Secondus failed to understand that as a national chairman of a party like PDP, he is expected to be just, fair, matured, incorruptible and have ability to manage every interest appropriately. Furthermore, as chairman, he was expected to suppress his personal interest for that of the party to thrive and nonpartisan in managing the affairs of PDP.

When you factor these and juxtapose them with the events that dominated the tenures of Secondus and other former PDP Chairmen, you will understand the reason they were disgracefully removed.

PDP National Chairmen And How They Fared

Solomon Lar: the protem national chairman, led the party to presidential success in 1999. Upon assumption in office, the President Olusegun Obasanjo, shoved him aside by forcing him not to seek a fresh term.

Barnabas Gemade, who emerged as national chairman and successor of Lar in 2001, had issues with the then President almost immediately after assuming power. The President became uncomfortable with him and suspected him of nursing presidential ambition in 2003 against him (Obasanjo). Gemade also had political issues with political stakeholders in his Benue state, including then Governor George Akume, Senator David Mark and others. As a result of these, he was eased out of the party and declared “retired” politically.

Audu Ogbeh: Gemade’s successor as national chairman, was heavily partisan as he was committed to playing the script of Vice President Atiku Abubakar. His pro-Atiku stance could not be tolerated by President Olusegun Obasanjo, who wanted to have firm control of the party. He ended up becoming a victim of Obasanjo/Atiku power play and was forced to sign an already prepared resignation letter by Obasanjo in a dramatic fashion.

Col Ahmadu Ali, who succeeded Ogbeh, was literally Obasanjo’s “lapdog”. He was used against internal opponents of the then President. He conducted a scandalous membership reregistration exercise to freeze out loyalists of Atiku Abubakar, which include Atiku Abubakar himself, Governor Boni Haruna of Adamawa state, Audu Ogbeh, his predecessor, and several others. This forced them to switch to Action Congress after failing unsuccessfully. The camp of President Umaru Yar’adua, Obasanjo’s successor, prevented him from seeking second term so as to get him kicked out and have full control of the party structure.

Vincent Ogbulafor, the successor of Ali was heavily partisan as well and loyal to Yar’adua’s political dynasty. He stood against elevation of vice president Goodluck Jonathan to be acting President when Yar’adua was in comatose. He was kicked after Jonathan took over as President following the demise of Yar’adua (by resurrecting some financial misdeeds during his ministerial reign).

Dr Ezekwesili Nwodo, who tookover from Ogbulafor was in power struggle with his Governor, Sullivan Chime of Enugu state. He was also accused of playing the script of Alhaji Atiku Abubakar penultimate to the 2011 National Convention (presidential primary election). He got kicked out on the eve of the Convention by the Jonathan’s camp.

Alhaji Bamanga Tukur was not the choice of the northeast stakeholders before his emergence but won anyway as the choice of President Jonathan. As Chairman, he power drunk, engaged in power struggle with Governors of the party, dissolved States Excecutives at will, and too heavily partisan towards Jonathan. To secure the support of Governors for 2015 election, President Jonathan bowed to the demand of Governors of the party to oust him. Tukur became a sacrificial lamb.

Alhaji Adamu Muazu, the famed “game changer” who succeeded Tukur, fell from the throne due to sabotage. He was accused of betraying the party to favor opposition All Progressive Congress in the 2015 election, and was forced to step aside.

Senator Ali Modu Sheriff: The former Borno state governor who became successor of Muazu came with his own plans. He became power drunk, sought to transmute into becoming Presidential candidate and highly selfish. His tenure as National chairman is one that members of the party will not easily forget.

Prince Uche Secondus, the now “former” chairman was partisan while in office, acted unfairly to certain stakeholders, notably Governor Seyi Makinde of Oyo state, exhibited selfishness in Rivers state by seeking to install his cousin as next Governor of the state in 2023, allegedly sought and took bribes from every interests without meeting their demands, he allegedly cares about his financial hunger than party’s advancement, and was alleged to have perpetuated gross misappropriation of party funds among other infractions. His exit, in my own opinion, is a welcome development.

As the party prepares for October Convention to elect new national executives, it will be in the best interest of whoever will emerge as the National Chairman of the party to learn from the failings of his immediate predecessor and other predecessors and act appropriately so as to break the jinx of unceremonious exit of PDP national chairmen.